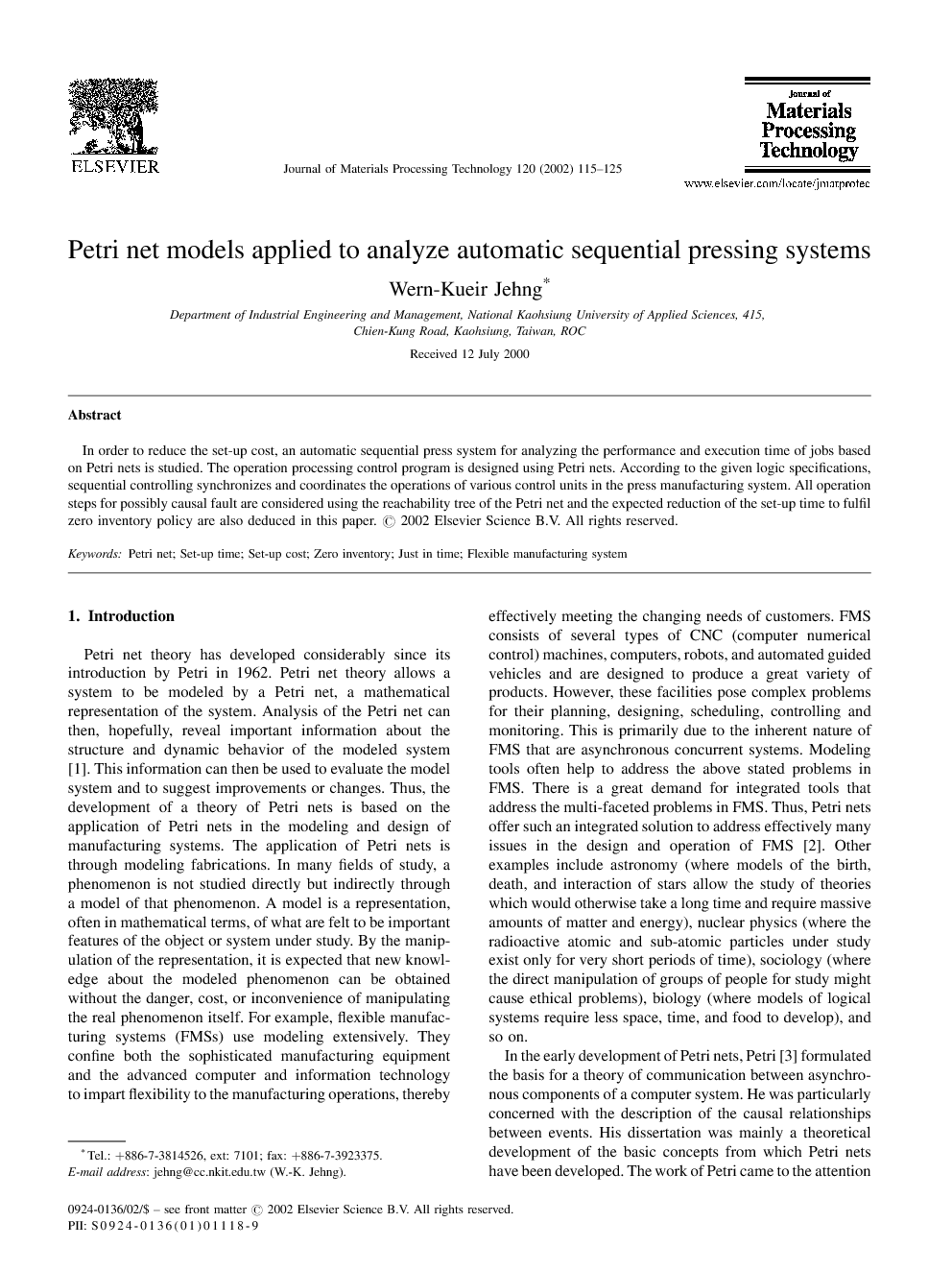 In order to reduce the set-up cost, an automatic sequential press system for analyzing the performance and execution time of jobs based on Petri nets is studied. The operation processing control program is designed using Petri nets. According to the given logic specifications, sequential controlling synchronizes and coordinates the operations of various control units in the press manufacturing system. All operation steps for possibly causal fault are considered using the reachability tree of the Petri net and the expected reduction of the set-up time to fulfil zero inventory policy are also deduced in this paper.

Petri net theory has developed considerably since its introduction by Petri in 1962. Petri net theory allows a system to be modeled by a Petri net, a mathematical representation of the system. Analysis of the Petri net can then, hopefully, reveal important information about the structure and dynamic behavior of the modeled system [1]. This information can then be used to evaluate the model system and to suggest improvements or changes. Thus, the development of a theory of Petri nets is based on the application of Petri nets in the modeling and design of manufacturing systems. The application of Petri nets is through modeling fabrications. In many fields of study, a phenomenon is not studied directly but indirectly through a model of that phenomenon. A model is a representation, often in mathematical terms, of what are felt to be important features of the object or system under study. By the manipulation of the representation, it is expected that new knowledge about the modeled phenomenon can be obtained without the danger, cost, or inconvenience of manipulating the real phenomenon itself. For example, flexible manufacturing systems (FMSs) use modeling extensively. They confine both the sophisticated manufacturing equipment and the advanced computer and information technology to impart flexibility to the manufacturing operations, thereby effectively meeting the changing needs of customers. FMS consists of several types of CNC (computer numerical control) machines, computers, robots, and automated guided vehicles and are designed to produce a great variety of products. However, these facilities pose complex problems for their planning, designing, scheduling, controlling and monitoring. This is primarily due to the inherent nature of FMS that are asynchronous concurrent systems. Modeling tools often help to address the above stated problems in FMS. There is a great demand for integrated tools that address the multi-faceted problems in FMS. Thus, Petri nets offer such an integrated solution to address effectively many issues in the design and operation of FMS [2]. Other examples include astronomy (where models of the birth, death, and interaction of stars allow the study of theories which would otherwise take a long time and require massive amounts of matter and energy), nuclear physics (where the radioactive atomic and sub-atomic particles under study exist only for very short periods of time), sociology (where the direct manipulation of groups of people for study might cause ethical problems), biology (where models of logical systems require less space, time, and food to develop), and so on.

In this paper, an automatic sequential press system is presented for studying how to reduce the die-changing set-up time by the Petri net reduction methods. Some hints are presented on transforming the redundant places or transitions to an extra-subnets or structures, or fusing some places and transitions to a mechanism to reduce the system complexity. In addition, ZI is investigated to estimate how much reduction of the set-up time is required for the system to be able to adopt the JIT production model. Based on the cost viewpoint, if the set-up cost is less than the raw material storage cost (material inventory cost), then the system can be interrupted and the quickly die changed to produce new parts. By economic theories, reducing the set-up time can reduce productive quantity, storage cost, total cost and can accelerate the productive cycle period. This research has developed a quick die-changing mechanism, shown in Fig. 6. It can reduce the set-up time to 4.5 min, which is much less than the JIT theoretical set-up time of 14.4 min. This establishes that the combination of technologies and theories can make a JIT production system able. Furthermore, the relative properties of automatic sequential press Petri nets have been studied: the nets are conservative, live, and bounded.