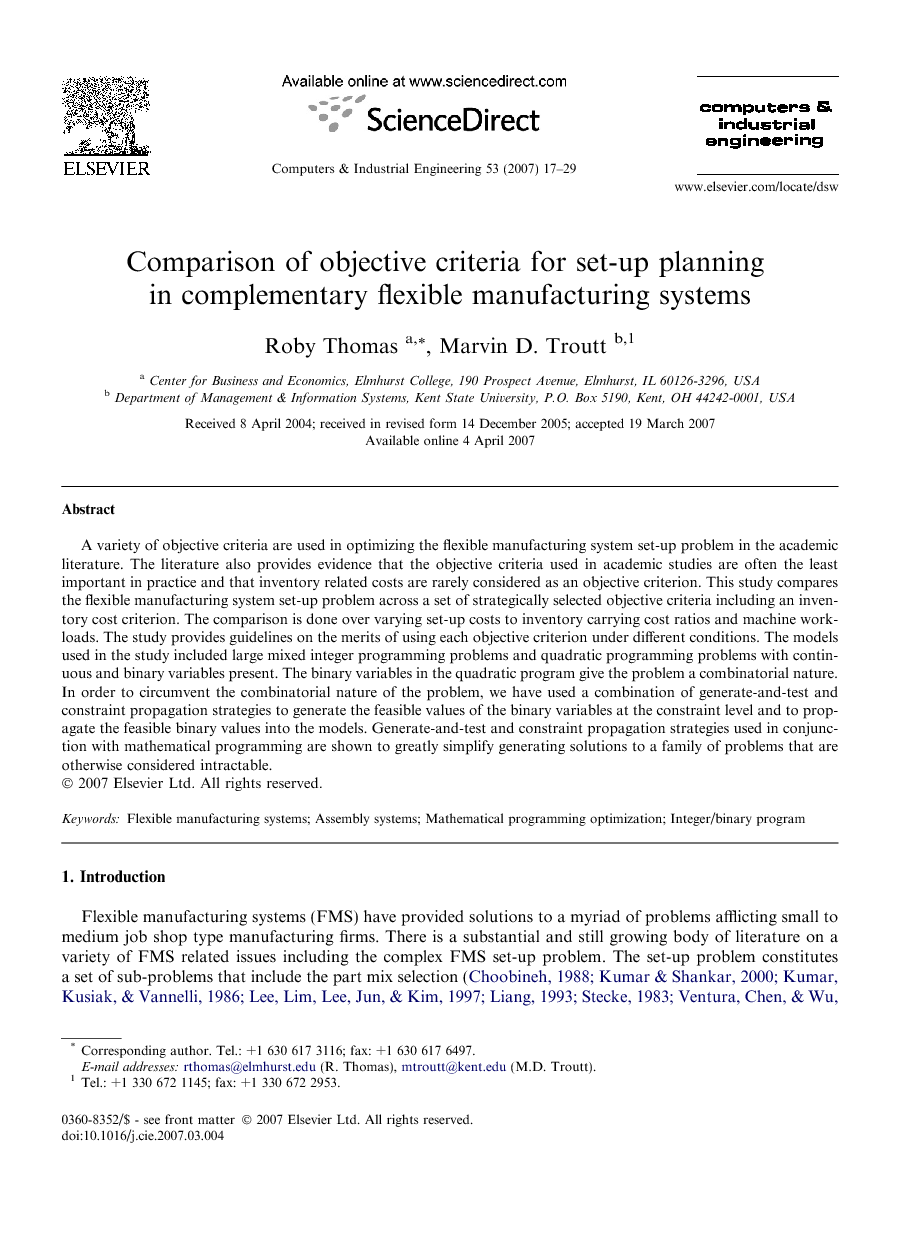 A variety of objective criteria are used in optimizing the flexible manufacturing system set-up problem in the academic literature. The literature also provides evidence that the objective criteria used in academic studies are often the least important in practice and that inventory related costs are rarely considered as an objective criterion. This study compares the flexible manufacturing system set-up problem across a set of strategically selected objective criteria including an inventory cost criterion. The comparison is done over varying set-up costs to inventory carrying cost ratios and machine workloads. The study provides guidelines on the merits of using each objective criterion under different conditions. The models used in the study included large mixed integer programming problems and quadratic programming problems with continuous and binary variables present. The binary variables in the quadratic program give the problem a combinatorial nature. In order to circumvent the combinatorial nature of the problem, we have used a combination of generate-and-test and constraint propagation strategies to generate the feasible values of the binary variables at the constraint level and to propagate the feasible binary values into the models. Generate-and-test and constraint propagation strategies used in conjunction with mathematical programming are shown to greatly simplify generating solutions to a family of problems that are otherwise considered intractable.

Flexible manufacturing systems (FMS) have provided solutions to a myriad of problems afflicting small to medium job shop type manufacturing firms. There is a substantial and still growing body of literature on a variety of FMS related issues including the complex FMS set-up problem. The set-up problem constitutes a set of sub-problems that include the part mix selection (Choobineh, 1988, Kumar and Shankar, 2000, Kumar et al., 1986, Lee et al., 1997, Liang, 1993, Stecke, 1983, Ventura et al., 1990 and Xiaobo et al., 2001), the machine grouping (Lee and Lee, 1998, Mohamed, 1998 and Yano, 1997), the production ratios (Stecke, 1986), the resource allocation (Azadivar and Lee, 1986, Tuchelmann, 1986 and Yao, 1986), and the loading (Guerrero et al., 1999, Kogan, 2001, Kumar et al., 2003, O’Grady and Menon, 1987, Sarin and Chen, 1987, Stecke and Solberg, 1981, Tiwari and Vidyarthi, 2000 and Vidyarthi and Tiwari, 2001) utilized during each production run. Smith, Ramesh, Dudek, and Blair (1986) have ranked the objective criteria used in practice based on a survey of scheduling procedures in FMS installations. Smith et al. (1986) report that the most commonly used criteria in the academic literature are often the least important in practice. One of the objectives of this study is to address the relative merits of a range of objective criteria used in part mix selection and loading sub-problems of the FMS set-up planning. Another objective of this study is to include economy of scale issues as a criterion in the FMS set-up planning. The literature available on FMS commonly assumes ideal FMS conditions where producing unit batch sizes are possible since machine set-ups and economies of scale issues do not exist. However, there is substantial evidence that points to a variety of reasons that can require operating FMS using machine set-ups and hence making economy of scale and inventory costs relevant.

We have compared the relative merits of using production, make-span, and inventory cost as the objective criteria for the FMS set-up problem. A non-linear programming model that incorporated binary variables to optimize inventory costs and mixed integer programs to optimize the production and make-span objectives were formulated and solved to facilitate the comparison. The models were tested under varying set-up cost to carrying cost ratios (S/h) and workload balance scenarios. The results obtained indicate that the make-span objective may be the best criterion to be used in a majority of the scenarios we tested. Generating solutions to these models are shown to be non-trivial. This study showed that a strategy of using mathematical programming in conjunction with constraint propagation and generate-and-test strategies facilitates optimal solutions to the above problems within a practical time frame.