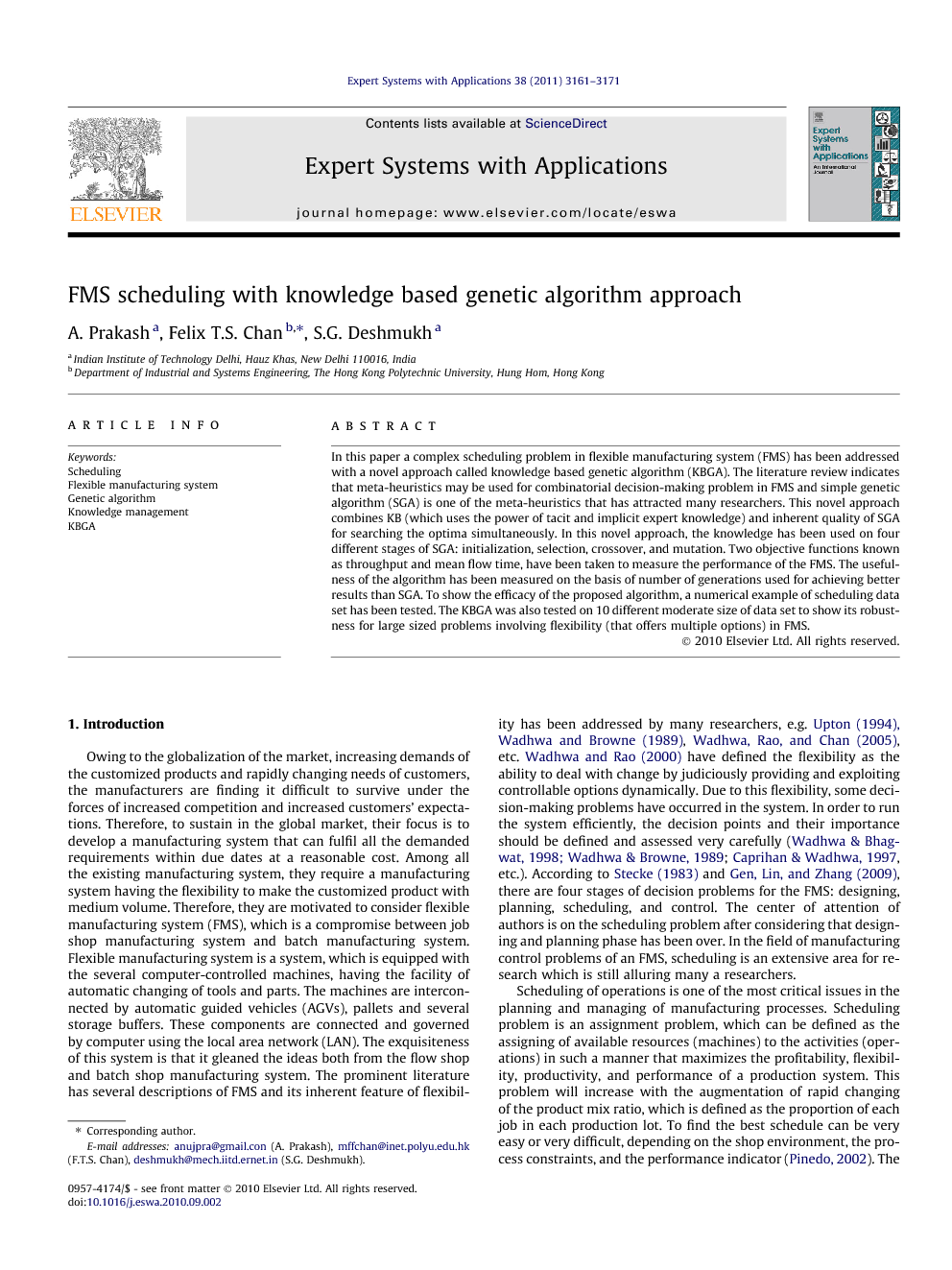 In this paper a complex scheduling problem in flexible manufacturing system (FMS) has been addressed with a novel approach called knowledge based genetic algorithm (KBGA). The literature review indicates that meta-heuristics may be used for combinatorial decision-making problem in FMS and simple genetic algorithm (SGA) is one of the meta-heuristics that has attracted many researchers. This novel approach combines KB (which uses the power of tacit and implicit expert knowledge) and inherent quality of SGA for searching the optima simultaneously. In this novel approach, the knowledge has been used on four different stages of SGA: initialization, selection, crossover, and mutation. Two objective functions known as throughput and mean flow time, have been taken to measure the performance of the FMS. The usefulness of the algorithm has been measured on the basis of number of generations used for achieving better results than SGA. To show the efficacy of the proposed algorithm, a numerical example of scheduling data set has been tested. The KBGA was also tested on 10 different moderate size of data set to show its robustness for large sized problems involving flexibility (that offers multiple options) in FMS.

Owing to the globalization of the market, increasing demands of the customized products and rapidly changing needs of customers, the manufacturers are finding it difficult to survive under the forces of increased competition and increased customers’ expectations. Therefore, to sustain in the global market, their focus is to develop a manufacturing system that can fulfil all the demanded requirements within due dates at a reasonable cost. Among all the existing manufacturing system, they require a manufacturing system having the flexibility to make the customized product with medium volume. Therefore, they are motivated to consider flexible manufacturing system (FMS), which is a compromise between job shop manufacturing system and batch manufacturing system. Flexible manufacturing system is a system, which is equipped with the several computer-controlled machines, having the facility of automatic changing of tools and parts. The machines are interconnected by automatic guided vehicles (AGVs), pallets and several storage buffers. These components are connected and governed by computer using the local area network (LAN). The exquisiteness of this system is that it gleaned the ideas both from the flow shop and batch shop manufacturing system. The prominent literature has several descriptions of FMS and its inherent feature of flexibility has been addressed by many researchers, e.g. Upton, 1994 and Wadhwa and Browne, 1989, Wadhwa, Rao, and Chan (2005), etc. Wadhwa and Rao (2000) have defined the flexibility as the ability to deal with change by judiciously providing and exploiting controllable options dynamically. Due to this flexibility, some decision-making problems have occurred in the system. In order to run the system efficiently, the decision points and their importance should be defined and assessed very carefully (Wadhwa and Bhagwat, 1998 and Wadhwa and Browne, 1989; Caprihan & Wadhwa, 1997, etc.). According to Stecke (1983) and Gen, Lin, and Zhang (2009), there are four stages of decision problems for the FMS: designing, planning, scheduling, and control. The center of attention of authors is on the scheduling problem after considering that designing and planning phase has been over. In the field of manufacturing control problems of an FMS, scheduling is an extensive area for research which is still alluring many a researchers.

The present paper shows the implication of a new approach for scheduling problem in FMS environment. In this paper, a knowledge based genetic algorithm (KBGA) has been proposed to improve the performance of the system. It combines a simple GA (SGA) with (tacit and explicit) expert knowledge that makes the knowledge base. This is an attempt to improve the effectiveness for FMS scheduling problem with the throughput and mean flow time as the key performance measures. The initialization scheme of the proposed approach enhances the potentials of the conventional GA, which has been reported in the previous section, by using both explicit and implicit knowledge. In the proposed algorithm, the operators are also used with the knowledge base to reduce the computational obstacles that minimizes the CPU time to reach the optimal/sub-optimal solution. To show the efficacy of the proposed KBGA, a comparative study has also been made with SGA. This study shows the faster convergence rate of KBGA with better quality solution. In the present study, the emphasis is also placed on the deciding on the crossover probability, which is also playing a vital role in diversifying the search and computational time.