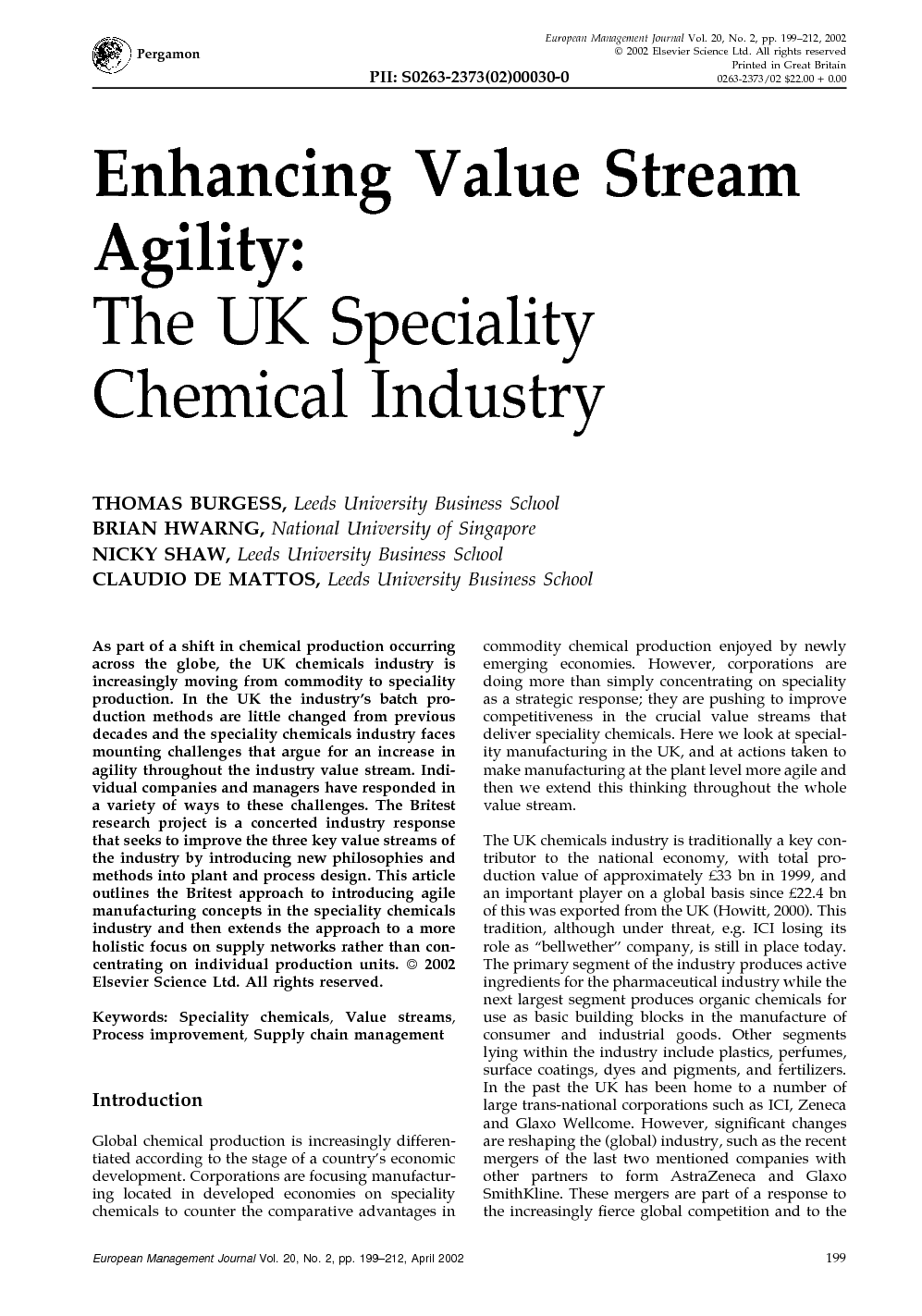 As part of a shift in chemical production occurring across the globe, the UK chemicals industry is increasingly moving from commodity to speciality production. In the UK the industry’s batch production methods are little changed from previous decades and the speciality chemicals industry faces mounting challenges that argue for an increase in agility throughout the industry value stream. Individual companies and managers have responded in a variety of ways to these challenges. The Britest research project is a concerted industry response that seeks to improve the three key value streams of the industry by introducing new philosophies and methods into plant and process design. This article outlines the Britest approach to introducing agile manufacturing concepts in the speciality chemicals industry and then extends the approach to a more holistic focus on supply networks rather than concentrating on individual production units.

Global chemical production is increasingly differentiated according to the stage of a country’s economic development. Corporations are focusing manufacturing located in developed economies on speciality chemicals to counter the comparative advantages in commodity chemical production enjoyed by newly emerging economies. However, corporations are doing more than simply concentrating on speciality as a strategic response; they are pushing to improve competitiveness in the crucial value streams that deliver speciality chemicals. Here we look at speciality manufacturing in the UK, and at actions taken to make manufacturing at the plant level more agile and then we extend this thinking throughout the whole value stream. The UK chemicals industry is traditionally a key contributor to the national economy, with total production value of approximately £33 bn in 1999, and an important player on a global basis since £22.4 bn of this was exported from the UK (Howitt, 2000). This tradition, although under threat, e.g. ICI losing its role as “bellwether” company, is still in place today. The primary segment of the industry produces active ingredients for the pharmaceutical industry while the next largest segment produces organic chemicals for use as basic building blocks in the manufacture of consumer and industrial goods. Other segments lying within the industry include plastics, perfumes, surface coatings, dyes and pigments, and fertilizers. In the past the UK has been home to a number of large trans-national corporations such as ICI, Zeneca and Glaxo Wellcome. However, significant changes are reshaping the (global) industry, such as the recent mergers of the last two mentioned companies with other partners to form AstraZeneca and Glaxo SmithKline. These mergers are part of a response to the increasingly fierce global competition and to the changing nature of the chemicals industry. The high level of competition is evident in that although UK chemical exports are substantial, imports have captured 63% of the UK market (Howitt, 2000). Recently the industry has come under increasing pressure, particularly in commodities, from competition from lower cost economies, e.g. China and India. The UK based industry is continuing to evolve away from commodity products and moving more towards producing low volume, high value added speciality chemicals with the intention of leaving high volume, low value added to more emergent manufacturing countries. The speciality chemical industry is fundamentally important to modern economies with its products used by every consumer industry and in every industry application (Howitt, 2000). However, the increased competition in the industry and other significant factors such as customer requirements for faster response than hitherto means that companies, and the value streams that they are positioned within, need to be more agile to respond to the challenges of this new regime. Surprisingly, despite the present and growing importance of the speciality market, UK industry relies substantially on methods of batch production that have little changed over the last half century. Major industry players believe that if the UK industry is to survive then companies need to move on from this traditional approach to manufacturing and thus imbue the industry value streams with increased agility. In this paper we illustrate via case studies this fundamental challenge to the industry and explore some of the ways that this challenge can be grasped. In particular we highlight the results of a particular industry and academia response to render more agile the key manufacturing elements of the industry’s value streams. This paper starts by taking a brief look at the concept of agility. Next the characteristics of the industry are examined and a value stream view articulated. The driving forces that are moving the industry towards this more agile regime are highlighted and illustrated by industry “snapshots”. Some ways of enhancing agility are then investigated and in particular an approach developed within a 3-year multi-disciplinary research project, Britest, is presented. The approach is then extended in scope to apply to supply networks before concluding the paper.

The paper has mapped out the increasing emphasis on speciality chemical manufacture in developed economies as a strategic response to pressures including the burgeoning production of commodity chemicals in emerging economies. The need for enhanced competitiveness in speciality chemical production through improved agility has been outlined and taken as the starting point for reporting a key academic and business research initiative to enhance production capabilities in the UK. Much is being done, and still remains to be done, to embed the improved process development methods from this initiative in industry and further refine them. However we have chosen in this paper to move the focus beyond improving agility at the individual production unit level, where companies are tending to direct these new methods, and have explored the potential for improving agility throughout the value streams that comprise the industry. Three value streams were identified: the project, core and capital asset value streams. This paper has investigated challenges to companies in the speciality chemical industry and illustrated the need for industry participants to enhance their agility. UK-based companies collaborating in the original research initiative are already taking steps to improve by adopting, with the assistance of a DTI-funded technology transfer project, the new production development methods stemming from the original initiative. Assuming successful technology transfer, the participating companies will benefit from a first mover advantage but it is to be expected that the improved methods will eventually diffuse to other companies. Thus the collaborating companies can seek to achieve additional benefits by extending the concepts of flexibility and agility beyond the production unit and taking a holistic value stream (supply chain) approach. The Britest approach addresses the intersection of at least three value streams and does not preclude addressing supply chain issues squarely; however the case studies conducted have tended to focus on processes in a single organization, and therefore we believe that there is future scope for a more holistic approach. The focus has been primarily on the project and core value streams, and in some cases on subsets of the core value stream. It is evident that there is still major scope for initiatives primarily located in the capital asset value stream, e.g. relating to equipment modularity and standardization, that if pursued could have significant impact on the other two value streams. Similarly the focus of Britest has been on the chemicals industry that contributes to wider value streams, such as that of the pharmaceutical industry, and therefore scope appears available for an even wider perspective to be brought to bear. In addition it is apparent from our involvement with the collaborating companies that the current rash of mergers and commercial restructuring are presenting substantial opportunities for reconfiguring existing value streams. It is also clear that companies are tuning in to this need to think at a supply chain level (Mullin, 2000). Manufacturing rationalization plans would both inform and be informed by a clearer understanding of plant-level capabilities’ influence upon overall supply chain characteristics. We believe that further development of Britest thinking should respond to these aspects and firmly adopt a wider supply network perspective that would generate even more substantial benefits than those projected so far.