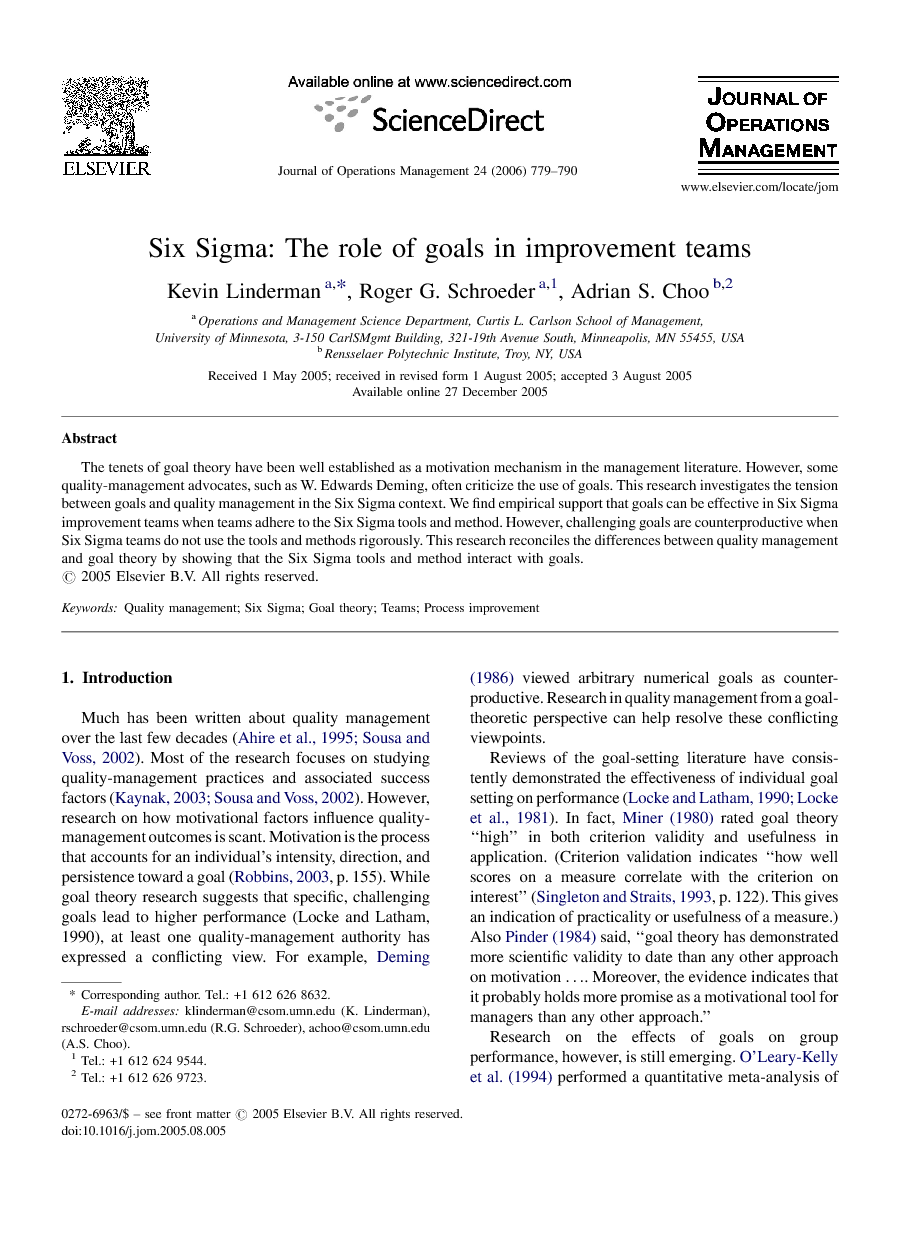 Much has been written about quality management over the last few decades (Ahire et al., 1995 and Sousa and Voss, 2002). Most of the research focuses on studying quality-management practices and associated success factors (Kaynak, 2003 and Sousa and Voss, 2002). However, research on how motivational factors influence quality-management outcomes is scant. Motivation is the process that accounts for an individual's intensity, direction, and persistence toward a goal (Robbins, 2003, p. 155). While goal theory research suggests that specific, challenging goals lead to higher performance (Locke and Latham, 1990), at least one quality-management authority has expressed a conflicting view. For example, Deming (1986) viewed arbitrary numerical goals as counterproductive. Research in quality management from a goal-theoretic perspective can help resolve these conflicting viewpoints. Reviews of the goal-setting literature have consistently demonstrated the effectiveness of individual goal setting on performance (Locke and Latham, 1990 and Locke et al., 1981). In fact, Miner (1980) rated goal theory “high” in both criterion validity and usefulness in application. (Criterion validation indicates “how well scores on a measure correlate with the criterion on interest” (Singleton and Straits, 1993, p. 122). This gives an indication of practicality or usefulness of a measure.) Also Pinder (1984) said, “goal theory has demonstrated more scientific validity to date than any other approach on motivation …. Moreover, the evidence indicates that it probably holds more promise as a motivational tool for managers than any other approach.” Research on the effects of goals on group performance, however, is still emerging. O’Leary-Kelly et al. (1994) performed a quantitative meta-analysis of goals in the group setting and found a significant relationship between group goals and group performance. None of the studies in their meta-analysis considered the effect of goals on quality-improvement teams. Quality-improvement teams are central to quality improvement (Scholtes et al., 1996) because effective teams can perform significantly better than a collection of individuals (Mohrman et al., 1995 and Katzenbach and Smith, 1993). Setting challenging group goals can promote team effectiveness (Locke and Latham, 1990) because goals tell teams what needs to be done and how much effort to expend. Little research in quality management uses goal theory. Some quality-management movements, such as the Zero Defects, have argued for setting very high goals. However, some quality thinkers have been critical of the goal-theoretic perspective. For example, Deming (1994, p. 41) said “… a goal that lies beyond the means of its accomplishment will lead to discouragement, frustration, and demoralization …. A numerical goal accomplishes nothing.” Deming systematically rejected the use of goals as a source of motivation (Carson and Carson, 1993). Deming's “negative views on quantitative goal setting are at odds with both the historical management prescriptions and contemporary research on goal setting and motivation” (Duncan and Van Matre, 1990, p. 5). Carson and Carson (1993) compare and contrast Deming's views with goal theory and reconcile differences when possible. Hackman and Wageman (1995) considered research issues related to quality management and noted, “It is not surprising that there is disagreement among the TQM authorities about goal setting, because the nature of the work done by quality teams raises some complex issues about how goals and objectives are properly framed.” The conflicting views of goals in quality management (e.g. Deming versus Zero Defects) suggest the need for more scholarly investigation. Empirical testing of goal theory in the quality context can help reduce the confusion between goal theory and quality management. Recently, Linderman et al., 2003 and Linderman et al., 2003 developed a set of propositions about Six Sigma from a goal-theoretic perspective. Schroeder et al., 2003 and Schroeder et al., 2003 provide a definition of Six Sigma and compare it with other quality-management approaches. These researchers argue that nothing is radically new in Six Sigma but Six Sigma does place a strong emphasis on challenging specific goals (see also Pande et al., 2000). In fact, the name Six Sigma suggests a goal of 3.4 parts per million defective. The Six Sigma approach to process improvement also employs numerous goals; for example, setting project improvement goals to increase performance by a factor of 10 (10×), hiring Black Belts on the basis of cost-saving goals, and selecting improvement projects based on financial and strategic goals. As a result, Six Sigma provides an ideal context to study the relationship between goal theory and quality management. Our research begins to test the tenets of goal theory in Six Sigma projects. Because Six Sigma is consistent with quality-management principles, these results should also be generalizable to other quality practices.

Despite the interesting results of this study, several limitations need to be emphasized. First, the study considered data from a single firm. Although this does help control for confounding factors like organizational culture, it lacks external validity. Further replications of this study are required to fully test the theory. Second, factors such as group cohesion ( Levine and Moreland, 1990 ) and social loafing ( Price, 1987 ) were not considered. These contextual variables could influence a team’s ability to achieve goals; however to date, they have not been tested ( O’Leary-Kelly et al., 1994 ). As research on goal theory in a group setting matures, we should better understand contextual variables in teams that influence goal achievementThird, other types of improvement projects beyond Six Sigma were not considered. Possibly the type of improvement project employed could effect the relationship between goals and performance. For example, the Do-It project discussed earlier could have a different effect on the relationship between goals and performance. Other improvement approaches such as Lean were also not considered. Possibly using alter- native improvement tools/methods has a different effect on relationship between goals and performance. Fourth, the role of national culture is not considered. Possibly, different national cultures affect how goals and Six Sigma Tools/Method affect performance. One reviewer noted that this relationship could be investi- gated by examining the interaction effects of the Domestic variable with all other variables in the model. However, this created significant multicollinearity problems that made interpretation of the coefficients impossible. Future research can study the effect of national culture on these relationships in more depth. Finally, project size and duration, prior group project experience, or project group size could also affect performance. Variation of these variables at MFG were somewhat limited since they typically scoped projects to last between 4 months and half a year, and each project had typically four to six team members. In addition, they had a 2-year rotation system for Black Belts, which meant that Black Belts had a 2-year assignment in Six Sigma and then were re-integrated back into the regular organization. This would control somewhat for prior experience with respect to Black Belts. As a result, these variables were somewhat fixed at MFG. Future research could investigate how changes in these variables influence performance. Despite the limitations, this study makes several important contributions. Notably, it helps to clarify the controversial relationship that goal theory has had with quality-management authorities. It shows that goals can be effective when used with quality tools and method. This is particularly important for Six Sigma, which has a strong goal orientation toward improvement ( Linder- man et al., 2003 ). In addition, very little research in operations management has considered goal theory ( Boudreau et al., 2003 ). This is surprising given that goal theory is well established in the management literature ( Locke and Latham, 1990 ). This research helps illustrate that operations management is not just a technical problem but also requires behavioral con- sideration. Future research in operations management should consider theories from organizational behavior. Organizational behavior theories might serve to enhance future research in operations management.Or, this research has demonstrated the usefulness of organizational behavior theories for future operations management inquiries.