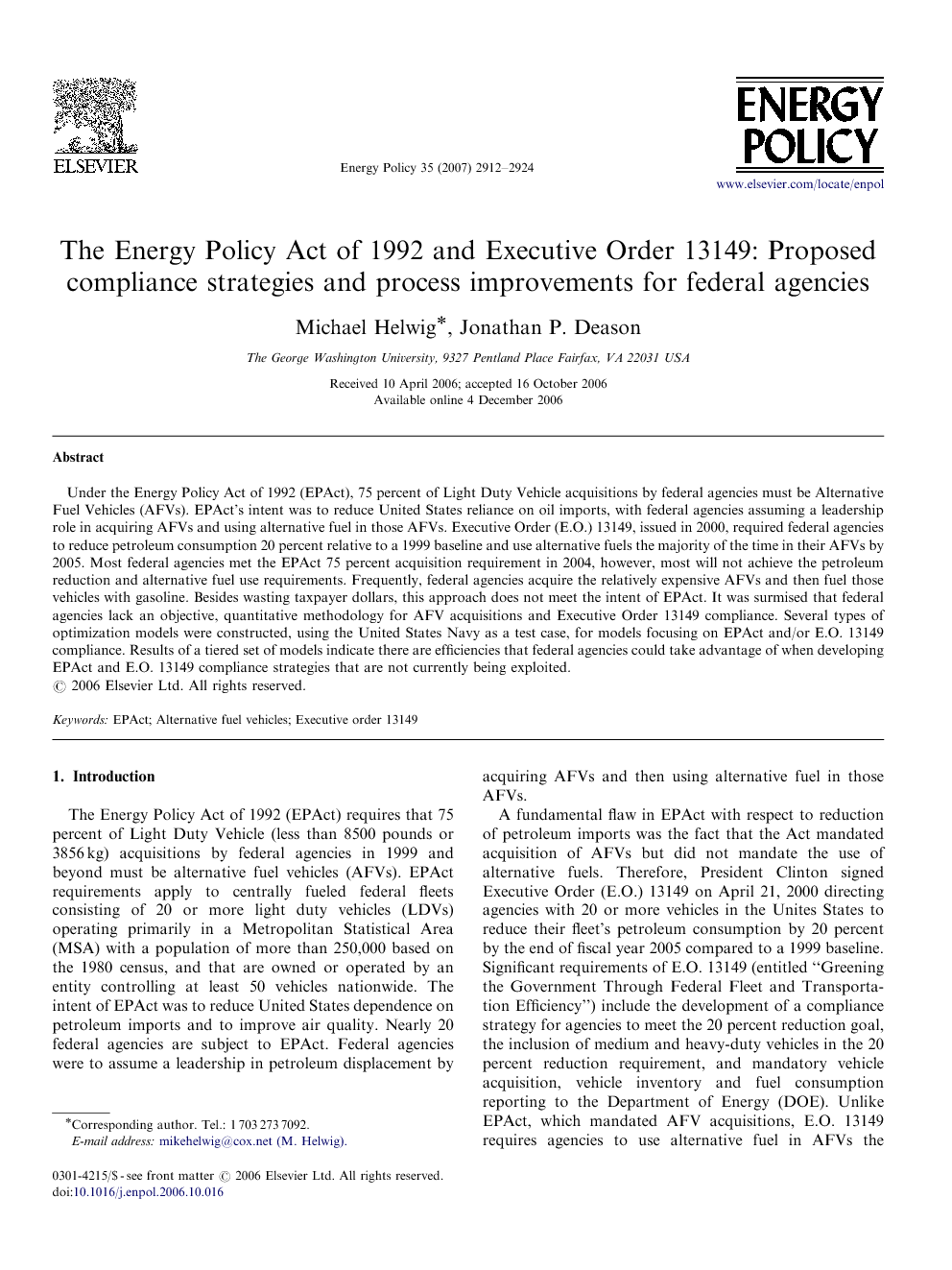 Under the Energy Policy Act of 1992 (EPAct), 75 percent of Light Duty Vehicle acquisitions by federal agencies must be Alternative Fuel Vehicles (AFVs). EPAct's intent was to reduce United States reliance on oil imports, with federal agencies assuming a leadership role in acquiring AFVs and using alternative fuel in those AFVs. Executive Order (E.O.) 13149, issued in 2000, required federal agencies to reduce petroleum consumption 20 percent relative to a 1999 baseline and use alternative fuels the majority of the time in their AFVs by 2005. Most federal agencies met the EPAct 75 percent acquisition requirement in 2004, however, most will not achieve the petroleum reduction and alternative fuel use requirements. Frequently, federal agencies acquire the relatively expensive AFVs and then fuel those vehicles with gasoline. Besides wasting taxpayer dollars, this approach does not meet the intent of EPAct. It was surmised that federal agencies lack an objective, quantitative methodology for AFV acquisitions and Executive Order 13149 compliance. Several types of optimization models were constructed, using the United States Navy as a test case, for models focusing on EPAct and/or E.O. 13149 compliance. Results of a tiered set of models indicate there are efficiencies that federal agencies could take advantage of when developing EPAct and E.O. 13149 compliance strategies that are not currently being exploited.

The Energy Policy Act of 1992 (EPAct) requires that 75 percent of Light Duty Vehicle (less than 8500 pounds or 3856 kg) acquisitions by federal agencies in 1999 and beyond must be alternative fuel vehicles (AFVs). EPAct requirements apply to centrally fueled federal fleets consisting of 20 or more light duty vehicles (LDVs) operating primarily in a Metropolitan Statistical Area (MSA) with a population of more than 250,000 based on the 1980 census, and that are owned or operated by an entity controlling at least 50 vehicles nationwide. The intent of EPAct was to reduce United States dependence on petroleum imports and to improve air quality. Nearly 20 federal agencies are subject to EPAct. Federal agencies were to assume a leadership in petroleum displacement by acquiring AFVs and then using alternative fuel in those AFVs. A fundamental flaw in EPAct with respect to reduction of petroleum imports was the fact that the Act mandated acquisition of AFVs but did not mandate the use of alternative fuels. Therefore, President Clinton signed Executive Order (E.O.) 13149 on April 21, 2000 directing agencies with 20 or more vehicles in the Unites States to reduce their fleet's petroleum consumption by 20 percent by the end of fiscal year 2005 compared to a 1999 baseline. Significant requirements of E.O. 13149 (entitled “Greening the Government Through Federal Fleet and Transportation Efficiency”) include the development of a compliance strategy for agencies to meet the 20 percent reduction goal, the inclusion of medium and heavy-duty vehicles in the 20 percent reduction requirement, and mandatory vehicle acquisition, vehicle inventory and fuel consumption reporting to the Department of Energy (DOE). Unlike EPAct, which mandated AFV acquisitions, E.O. 13149 requires agencies to use alternative fuel in AFVs the majority of the time the vehicles are in operation by the year 2005, and also requires agencies to increase the fuel efficiency of new LDVs by 1 mile per gallon (mpg) by 2002 and 3 mpg by 2005 compared to a 1999 baseline (or equivalently, 0.425 km/l by 2002, and 1.275 km/l by 2005). E.O. 13149 forces agencies to achieve fuel use reduction by acquisition and use of AFVs and alternative fuels, and by acquisition of higher fuel economy vehicles (say a hybrid vehicle, for example, which won’t help an agency meet EPAct goals but could assist in meeting E.O. 13149 goals). This paper describes our work to capture EPAct and E.O. 13149 compliance data from federal agency annual reports, examine current compliance strategies, and analyze the results of a series of tiered integer optimization models that were created to improve federal agency EPAct and E.O. 13149 compliance. The United States Navy is used as a test case to compare its current compliance strategy with those developed by the series of tiered optimization models.

Federal agencies need to adopt an optimal EPAct and E.O. 13149 compliance strategy that uses taxpayer dollars efficiently. As demonstrated in this paper, strategies are available that would displace more petroleum than is currently being displaced, at or below the current budget, while still meeting EPAct and/or NDAA 2002 requirements. Dollars saved due to efficiencies could be used for additional alternative fuel infrastructure or other pressing requirements. It is clear that any federal agency must consider infrastructure construction in any reasonable EPAct and E.O. 13149 compliance strategy. Almost all model runs that allowed infrastructure construction did in fact opt for constructing alternative fuel stations, with large improvements in alternative fuel use. The recently passed Energy Policy Act of 2005 requires AFVs to use alternative fuel unless it is not available or unreasonably expensive. In order to avoid acquiring thousands of relatively expensive AFVs that will never use alternative fuel, agencies need to adopt strategies allowing for infrastructure construction. This research has demonstrated that reasonable, cost-efficient strategies are available. Model solutions need to be evaluated for practicality and efficiency. It does not make sense, for example, to construct an expensive CNG facility only to fuel a few AFVs. Some solutions, while optimal, are not always cost-efficient. MCDM techniques could be employed to determine acceptable tradeoffs between cost, EPAct and E.O. 13149 compliance, for example. The “best” strategy depends on what one is trying to maximize or minimize, and whether one considers NDAA 2002 requirements, maintenance and fuel costs, construction options, EPAct requirements, public good, and similar considerations. DoD and DOE need to update their compliance strategies so that they are realistic and achievable, and produce solutions that optimize the allocation of an agency's budget. Federal agencies need to adopt one or more of these strategies based on their individual goals and preferences. Legislators must understand that there is a cost to EPAct and NDAA 2002 implementation for the agencies. When model variations that required 75 percent EPAct compliance were compared to iterations that did not require EPAct requirements to be met, there usually was an increase in costs associated with acquiring enough AFVs to meet the 75 percent requirement. These costs for Navy were as high as $655,000 for EPAct and $500,000 for NDAA 2002. Further research is required in order to develop strategies that focus on a more global perspective. This research summarized herein was successful in demonstrating that compliance strategies are available that would improve compliance for a federal agency. A larger perspective might be that of the entire federal government. In that case, the optimization model would be considering a strategy for all federal agencies. For example, a model for an individual federal agency might not elect to construct an alternative fuel station because it is too expensive but, if several agencies were to use the station and each funded part of the construction costs, it might make sense to build the alternative fuel station. An even larger perspective might be that of the federal and state fleets combined, for example. Additional research needs to be conducted focusing on developing optimal strategies for federal agencies that incorporate MCDM techniques based on tradeoffs most acceptable to fleet managers and their associated agencies. We are not aware of EPAct-like statutory requirements in other countries, but with the recent higher petroleum prices, alternative fuels are sure to be of continued interest for petroleum importers. AFV acquisition plans and infrastructure construction options for other countries might benefit from efficient strategies discussed in this paper.