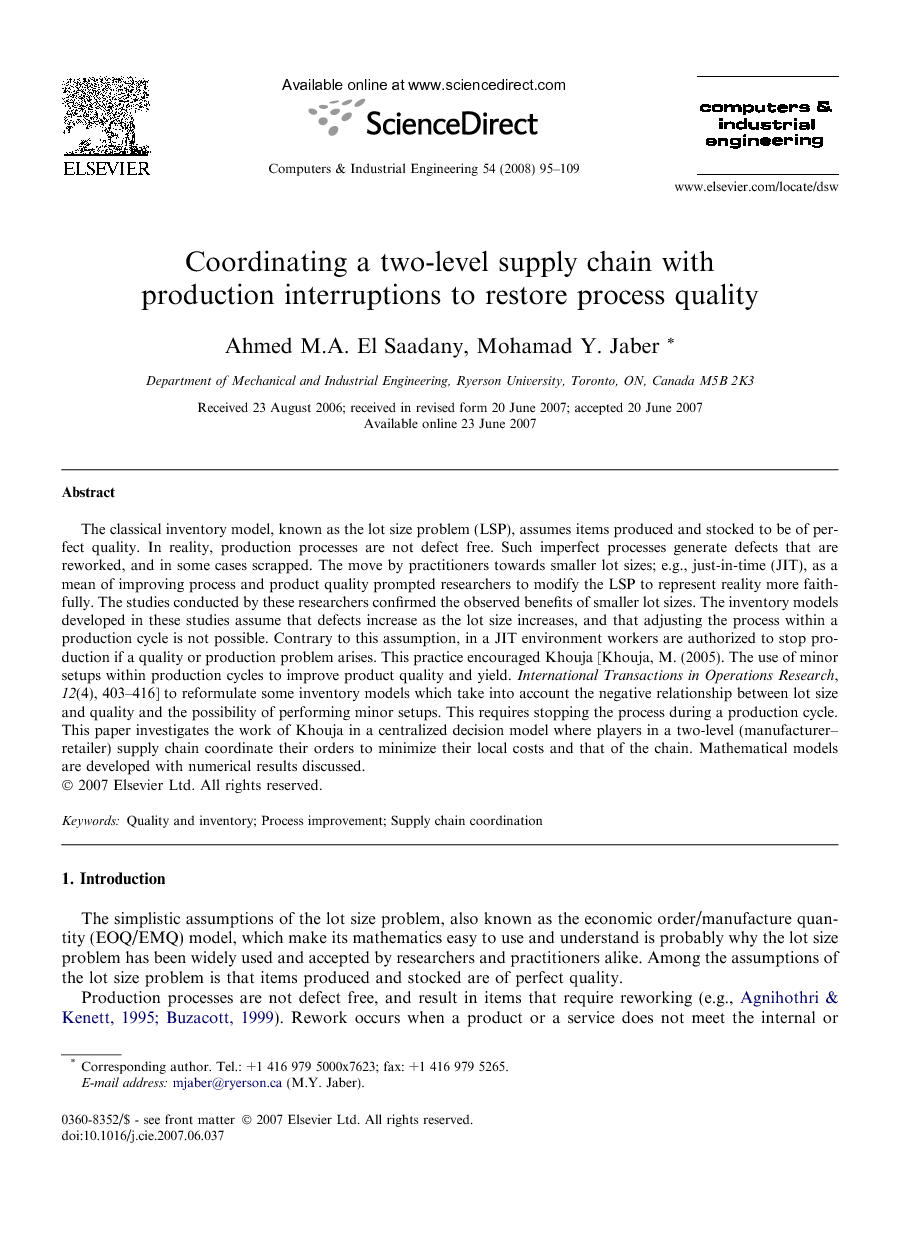 The classical inventory model, known as the lot size problem (LSP), assumes items produced and stocked to be of perfect quality. In reality, production processes are not defect free. Such imperfect processes generate defects that are reworked, and in some cases scrapped. The move by practitioners towards smaller lot sizes; e.g., just-in-time (JIT), as a mean of improving process and product quality prompted researchers to modify the LSP to represent reality more faithfully. The studies conducted by these researchers confirmed the observed benefits of smaller lot sizes. The inventory models developed in these studies assume that defects increase as the lot size increases, and that adjusting the process within a production cycle is not possible. Contrary to this assumption, in a JIT environment workers are authorized to stop production if a quality or production problem arises. This practice encouraged Khouja [Khouja, M. (2005). The use of minor setups within production cycles to improve product quality and yield. International Transactions in Operations Research, 12(4), 403–416] to reformulate some inventory models which take into account the negative relationship between lot size and quality and the possibility of performing minor setups. This requires stopping the process during a production cycle. This paper investigates the work of Khouja in a centralized decision model where players in a two-level (manufacturer–retailer) supply chain coordinate their orders to minimize their local costs and that of the chain. Mathematical models are developed with numerical results discussed.

This paper investigates the work of Khouja (2005) in a two-level supply chain (manufacturer–retailer) with coordination. Khouja (2005) and unlike the work of Porteus (1986) and its extensions, it is the first to assume that a production process can be interrupted to restore process quality at a cost. However, an additional cost represented by minor setup is incurred. Three cases that describe the behavior of the manufacturer’s inventory level were considered. These cases are: (1) Case 1: restore the production process after delivering a lot to the retailer, (2) Case 2: restore the production process before delivering a lot to the retailer, and (3) Case 3: restore the production process at any time during production. Our results indicate that without coordination and when the manufacturer’s inventory behavior follows either Case 1 or Case 2, the optimal policy for the manufacturer is to follow a lot-for-lot policy where no minor setups are performed. This policy was not true for Case 3, which registered very good results even better than those of Cases 1 and 2 with coordination. This is because of the flexibility that Case 3 in lot delivery to theretailer which reduces the holding and rework costs. Our results also indicated that with coordination the trend is to order in smaller lots than the retailer’s economic order quantity more frequently. This corroborates the findings that smaller lots are recommended when production is imperfect. The effect of the length of the period required to restore process quality, s , on the supply chain cost was also investigated. Our results indicated that there exists an optimal value of s that minimizes the supply chain cost. Besides determining the optimal order and production policies in a supply chain, our results also suggest that attention must also be paid when specifying the length of the period required to restore a production process and the frequency of these restorationsSimplified forms of the mathematical models developed in this paper are needed to facilitate their imple- mentation in a real world setting. This issue will be addressed in a future work.