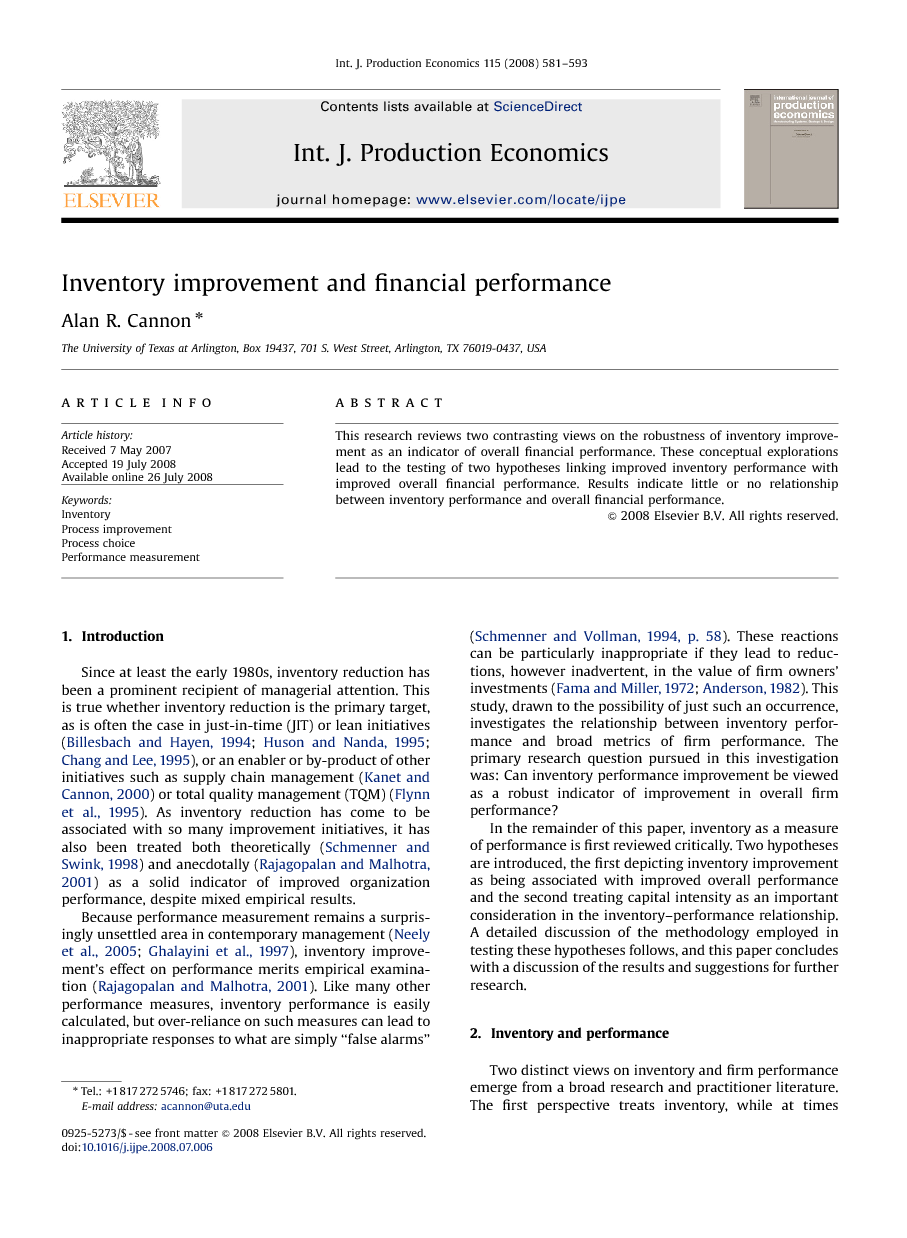 Since at least the early 1980s, inventory reduction has been a prominent recipient of managerial attention. This is true whether inventory reduction is the primary target, as is often the case in just-in-time (JIT) or lean initiatives (Billesbach and Hayen, 1994; Huson and Nanda, 1995; Chang and Lee, 1995), or an enabler or by-product of other initiatives such as supply chain management (Kanet and Cannon, 2000) or total quality management (TQM) (Flynn et al., 1995). As inventory reduction has come to be associated with so many improvement initiatives, it has also been treated both theoretically (Schmenner and Swink, 1998) and anecdotally (Rajagopalan and Malhotra, 2001) as a solid indicator of improved organization performance, despite mixed empirical results. Because performance measurement remains a surprisingly unsettled area in contemporary management (Neely et al., 2005; Ghalayini et al., 1997), inventory improvement's effect on performance merits empirical examination (Rajagopalan and Malhotra, 2001). Like many other performance measures, inventory performance is easily calculated, but over-reliance on such measures can lead to inappropriate responses to what are simply “false alarms” (Schmenner and Vollman, 1994, p. 58). These reactions can be particularly inappropriate if they lead to reductions, however inadvertent, in the value of firm owners’ investments (Fama and Miller, 1972; Anderson, 1982). This study, drawn to the possibility of just such an occurrence, investigates the relationship between inventory performance and broad metrics of firm performance. The primary research question pursued in this investigation was: Can inventory performance improvement be viewed as a robust indicator of improvement in overall firm performance? In the remainder of this paper, inventory as a measure of performance is first reviewed critically. Two hypotheses are introduced, the first depicting inventory improvement as being associated with improved overall performance and the second treating capital intensity as an important consideration in the inventory–performance relationship. A detailed discussion of the methodology employed in testing these hypotheses follows, and this paper concludes with a discussion of the results and suggestions for further research.

This research focused on assessing the relationship between inventory performance and overall firm perfor- mance. Two contrasting views on this relationship were explored theoretically, and two hypotheses emerging from this exploration were put to test. Results indicated no link between improvements in inventory performance and improvements in overall firm performance, even when fundamental changes to firms’ production approaches (and other potential confounds) were taken into account. Meredith et al. (1989) noted that when it is dealt with as a research matter, inventory reduction, like operations strategy, too frequently takes on a ‘‘sacrosanct’’ flavor, the argument being that inventory should be reduced simply because inventory reduction is in and of itself necessarily desirable. Such a dynamic, in which an approach’s reputed value is at odds with its true value in a given setting, is all- too common in organizational life ( Goodstein, 1994 ; Suchman, 1995 ), leaving to researchers and practicing managers the task of working through mixed findings or confusing results. To managers searching for a robust performance measure that demonstrates the value of improving processes ( Davy et al., 1992 ; Flynn et al., 1995 ; Lieberman and Demeester, 1999 ) or strengthening inter-organiza- tional ties ( Lee and Ng, 1997 ) (or to researchers exploring the performance consequences of these or other efforts), this research offers a word of caution: Improvement in inventory performance should not be taken necessarily as an indication that overall performance has improved. This finding is all the more striking given the degree to which improved inventory turnover remains a popular justifica- tion for (and measure of) the effectiveness of a firm’sefforts across a wide range of activities ( Gunasekaran et al., 2001 ; Storey et al., 2006 ). This research, then, calls into question the findings of other studies in which inventory performance served as a primary (or the only) performance measure; although an organizational phenomenon (e.g., the adoption of a particular manufacturing initiative) might correlate with reduced inventory, this research suggests that an increase in overall firm performance cannot be assumed to follow. While there could be circumstances in which inventory performance could be a reasonable proxy for overall performance, this research suggests that these are unlikely to be the general case.