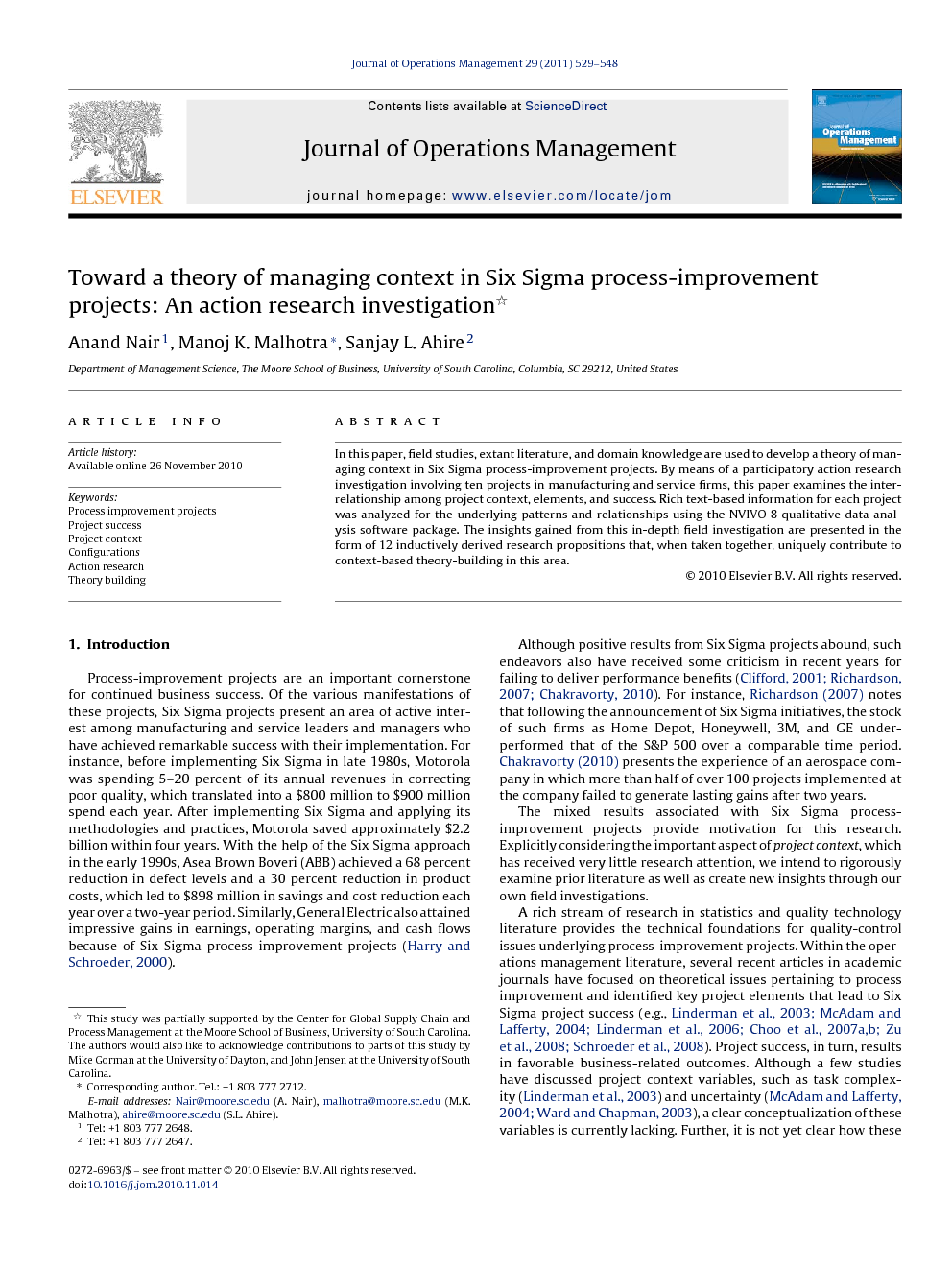 In this paper, field studies, extant literature, and domain knowledge are used to develop a theory of managing context in Six Sigma process-improvement projects. By means of a participatory action research investigation involving ten projects in manufacturing and service firms, this paper examines the interrelationship among project context, elements, and success. Rich text-based information for each project was analyzed for the underlying patterns and relationships using the NVIVO 8 qualitative data analysis software package. The insights gained from this in-depth field investigation are presented in the form of 12 inductively derived research propositions that, when taken together, uniquely contribute to context-based theory-building in this area.

Process-improvement projects are an important cornerstone for continued business success. Of the various manifestations of these projects, Six Sigma projects present an area of active interest among manufacturing and service leaders and managers who have achieved remarkable success with their implementation. For instance, before implementing Six Sigma in late 1980s, Motorola was spending 5–20 percent of its annual revenues in correcting poor quality, which translated into a $800 million to $900 million spend each year. After implementing Six Sigma and applying its methodologies and practices, Motorola saved approximately $2.2 billion within four years. With the help of the Six Sigma approach in the early 1990s, Asea Brown Boveri (ABB) achieved a 68 percent reduction in defect levels and a 30 percent reduction in product costs, which led to $898 million in savings and cost reduction each year over a two-year period. Similarly, General Electric also attained impressive gains in earnings, operating margins, and cash flows because of Six Sigma process improvement projects (Harry and Schroeder, 2000). Although positive results from Six Sigma projects abound, such endeavors also have received some criticism in recent years for failing to deliver performance benefits (Clifford, 2001, Richardson, 2007 and Chakravorty, 2010). For instance, Richardson (2007) notes that following the announcement of Six Sigma initiatives, the stock of such firms as Home Depot, Honeywell, 3M, and GE underperformed that of the S&P 500 over a comparable time period. Chakravorty (2010) presents the experience of an aerospace company in which more than half of over 100 projects implemented at the company failed to generate lasting gains after two years. The mixed results associated with Six Sigma process-improvement projects provide motivation for this research. Explicitly considering the important aspect of project context, which has received very little research attention, we intend to rigorously examine prior literature as well as create new insights through our own field investigations. A rich stream of research in statistics and quality technology literature provides the technical foundations for quality-control issues underlying process-improvement projects. Within the operations management literature, several recent articles in academic journals have focused on theoretical issues pertaining to process improvement and identified key project elements that lead to Six Sigma project success (e.g., Linderman et al., 2003, McAdam and Lafferty, 2004, Linderman et al., 2006, Choo et al., 2007a, Choo et al., 2007b, Zu et al., 2008 and Schroeder et al., 2008). Project success, in turn, results in favorable business-related outcomes. Although a few studies have discussed project context variables, such as task complexity (Linderman et al., 2003) and uncertainty (McAdam and Lafferty, 2004 and Ward and Chapman, 2003), a clear conceptualization of these variables is currently lacking. Further, it is not yet clear how these contextual variables on their own and in concert with the project management elements identified in prior literature affect project success. This study accordingly addresses the following research questions: - What are the key contextual variables that play an important role in process-improvement projects, with a specific focus on Six Sigma projects? - Can process-improvement projects be categorized based on their underlying context? - What is the relationship between project context and project success? - How do project context and project management elements together affect project success? The literature on process-improvement projects is reviewed next. The third section presents the research design and the data characteristics, followed by the qualitative and quantitative analyses. The fourth and fifth sections present the theoretical propositions derived from the field data and provide implications of the findings. In the sixth section, the implications of the findings from the study are presented. The seventh section concludes the paper and offers directions for future research.

Through an extended participatory action research investiga- tion of ten process improvement projects conducted over multiple years, we examined the contextual role played by complexity and uncertainty in the success of process-improvement projects. The findings from our field study provide insights into critical issues that must be considered in such initiatives. It is important to main- tainabalancebetweentheadoptionofstructuredmethodsandthe creation of an environment of psychological safety. Imposition of coherenceearlyintheprojectbyadoptingstructuredmethodsmay limit further understanding of project scope, team capabilities, and externalenvironment.Asemphasizedin BrownandStarkey(2000: p. 113) , projects should, therefore, exhibit “a composite of curios- ity, a willingness to learn, and an openness to learn new things about one’s environment that challenges the assumption that we know all that we need to know and all that could possibly be rele- vant.” Instead of assuming environmental stability, it is important to embrace uncertainty and complexity ( Weick, 1993, 1995 ). To enhance the validity and generalizability of our findings linking Six Sigma project elements, project themes, and project success, future studies need to recognize the role played by project complexity and project uncertainty. Viewing project management elements as a bundle of practices that interact with the contextual situation could further advance our understanding of Six Sigma project management. Finally, empirical studies with large-scale data sets are needed to replicate and confirm the theories offered in this paper, generalize our findings, and help in transitioning the knowledge base in this area from theory building to theory testing.