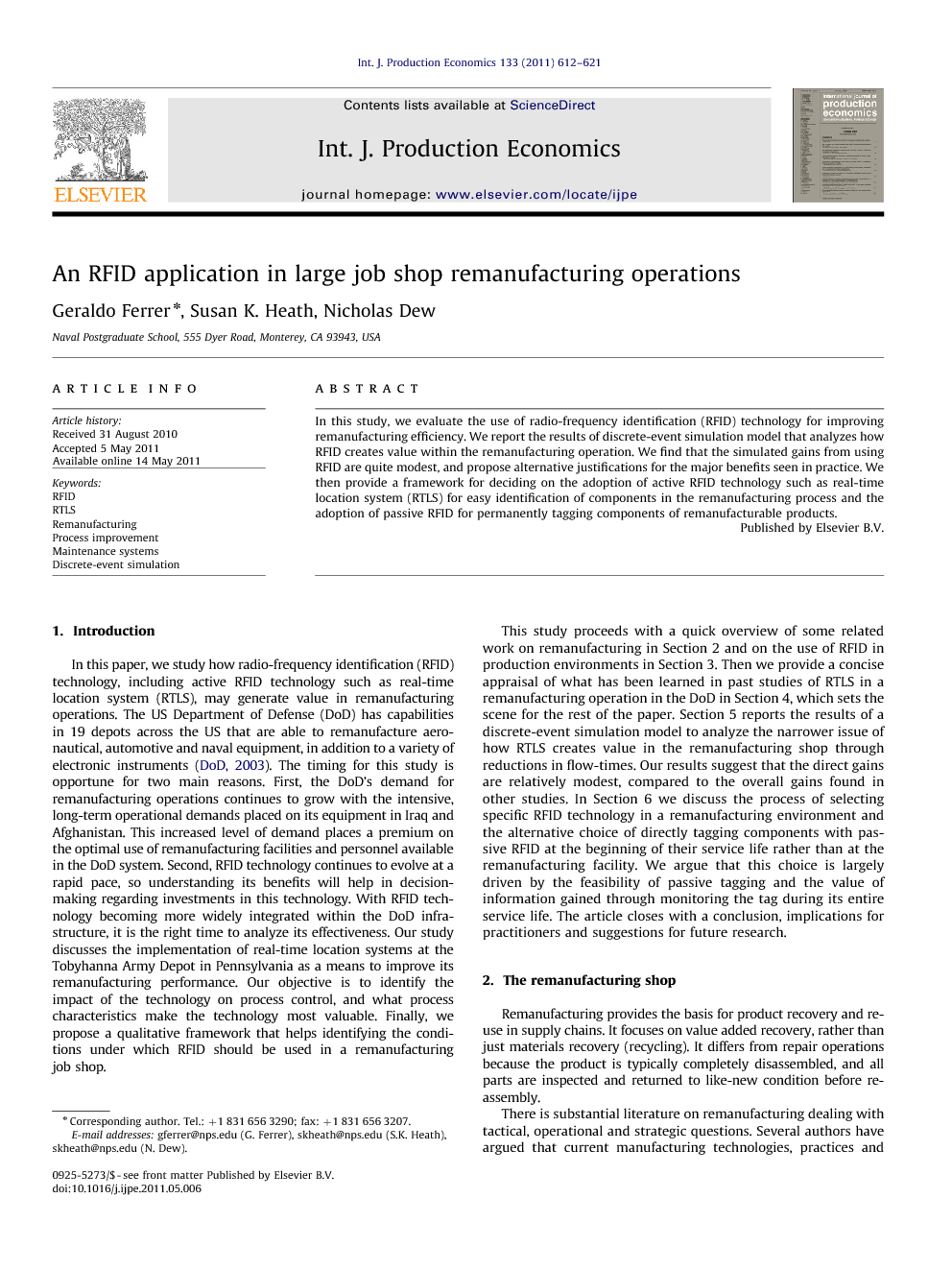 In this study, we evaluate the use of radio-frequency identification (RFID) technology for improving remanufacturing efficiency. We report the results of discrete-event simulation model that analyzes how RFID creates value within the remanufacturing operation. We find that the simulated gains from using RFID are quite modest, and propose alternative justifications for the major benefits seen in practice. We then provide a framework for deciding on the adoption of active RFID technology such as real-time location system (RTLS) for easy identification of components in the remanufacturing process and the adoption of passive RFID for permanently tagging components of remanufacturable products.

In this paper, we study how radio-frequency identification (RFID) technology, including active RFID technology such as real-time location system (RTLS), may generate value in remanufacturing operations. The US Department of Defense (DoD) has capabilities in 19 depots across the US that are able to remanufacture aeronautical, automotive and naval equipment, in addition to a variety of electronic instruments (DoD, 2003). The timing for this study is opportune for two main reasons. First, the DoD's demand for remanufacturing operations continues to grow with the intensive, long-term operational demands placed on its equipment in Iraq and Afghanistan. This increased level of demand places a premium on the optimal use of remanufacturing facilities and personnel available in the DoD system. Second, RFID technology continues to evolve at a rapid pace, so understanding its benefits will help in decision-making regarding investments in this technology. With RFID technology becoming more widely integrated within the DoD infrastructure, it is the right time to analyze its effectiveness. Our study discusses the implementation of real-time location systems at the Tobyhanna Army Depot in Pennsylvania as a means to improve its remanufacturing performance. Our objective is to identify the impact of the technology on process control, and what process characteristics make the technology most valuable. Finally, we propose a qualitative framework that helps identifying the conditions under which RFID should be used in a remanufacturing job shop. This study proceeds with a quick overview of some related work on remanufacturing in Section 2 and on the use of RFID in production environments in Section 3. Then we provide a concise appraisal of what has been learned in past studies of RTLS in a remanufacturing operation in the DoD in Section 4, which sets the scene for the rest of the paper. Section 5 reports the results of a discrete-event simulation model to analyze the narrower issue of how RTLS creates value in the remanufacturing shop through reductions in flow-times. Our results suggest that the direct gains are relatively modest, compared to the overall gains found in other studies. In Section 6 we discuss the process of selecting specific RFID technology in a remanufacturing environment and the alternative choice of directly tagging components with passive RFID at the beginning of their service life rather than at the remanufacturing facility. We argue that this choice is largely driven by the feasibility of passive tagging and the value of information gained through monitoring the tag during its entire service life. The article closes with a conclusion, implications for practitioners and suggestions for future research.