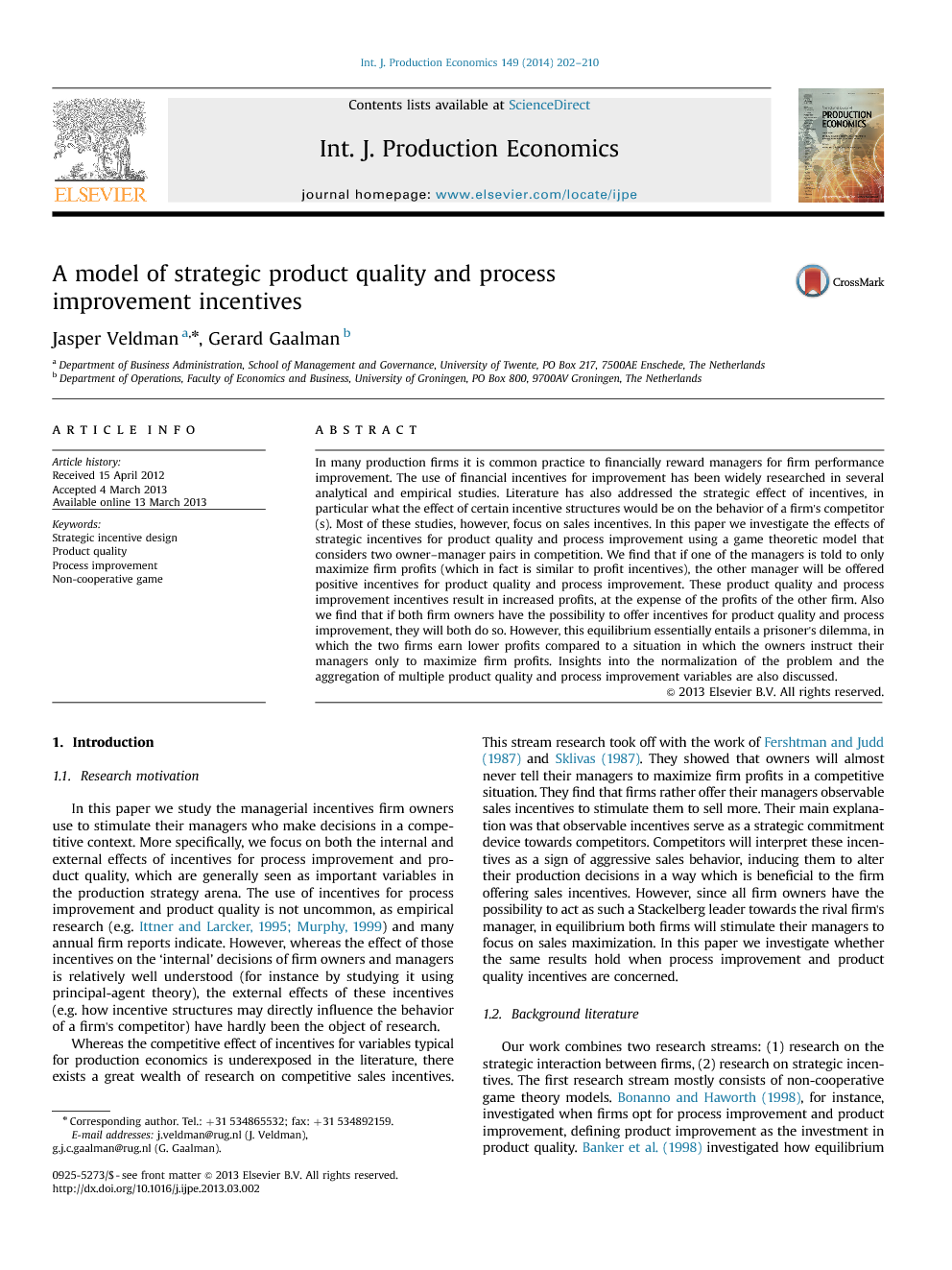 The use of incentives to stimulate managerial behavior is common practice for many industrial fi rms, although in a monopolistic setting this practice seems to be fi nancially unjusti fi ed. In a duopolistic setting, however, a fi rm owner may wish to stimulate his/her manager to maximize a function other than pro fi t, if such an incentive scheme also serves as a tool to in fl uence the behavior of the rival fi rm. We study the optimal strategic incentives for two important yet very distinct production decision s: process improvement and pro- duct quality. In the asymmetric case where only one fi rm owner can instruct his/her manager to maximize a non-pro fi tfunction,we fi nd that this fi rm owner sets positive process improvement and product quality incentive weights in order to manipulate the behavior of the rival fi rm ' s manager. In the symmetric case, both fi rm owners set positive process improvement and p roduct quality incentive weights. In turn, these incentives lead to higher process improvement levels, higher product quality levels, and lower prices compared toa situation in which the managers are instructed to maximize pro fi ts only.However,eventhoughtheprovisionofpositiveincentivesisa Nash equilibrium, both fi rm owners will also earn lower pro fi ts. In other words, our case comprises a classic prisoner ' s dilemma. At the practical level, our work may inspire decision makers to rethink their managerial remuneration strategies, particularly when incentive schemes are visible to rival fi rms. On the one hand incentive schemes can be an effective way to change the behavior of rival fi rms. On the other hand the collective choice for positive incentives for variables such as process improvement and product quality leads to lower pro fi ts. Thus, it is important for fi rm owners to be able to foresee the internal relationships of rival fi rms, in particular the way the rival manager is compensated. Our results suggest that visible contractual inertia (i.e. a fi rm ' sinabilityto change managerial contracts in the short term) makes a fi rm an easy victim for aggressive behavior by the rival fi rm. At the theoretical level, our work extends existing studies into the competitive interaction between fi rms when process improvement, product quality and pricing decisions are concerned. In particular we apply ideas originated in the strategic incentive design literature to two key production decisions. Future work could extend our frame- work by allowing bargaining processes between different depart- mental managers (e.g. marketing and manufacturing). Such an extension would tell us more about the (potential) tradeoffs that may exist between process improvement and product quality. In this paper we assume no ex ante differences between fi rms, by de fi ning cost parameters, price volatility parameters and quality volatility parameters that are equal for both fi rms. The use of fi rm- speci fi c cost parameters, as is done in Veldman et al. (2013) ,would yield the opportunity to study fi rm cost asymmetries. A signi fi cant difference in m 1 and m 2 ,forinstance,appliestothecasewhereasmall fi rm (with low m 1 ) bears little investment cost for an increase in the level of process improvement compared to a large fi rm (facing high m 2 ) to which a process improvement level increase is much costlier. Similar cases could be studied assu ming asymmetric brand equities (e.g. expressed using a fi rm speci fi c price volatility parameter β 1 ≠ β 2 or quality volatility parameter γ 1 ≠ γ 2 ). Future research could shed more light on the interaction between multiple fi rm-speci fi c parameters, the structure of incentive weights, and equilibrium pro fi ts. Next to this, it would be interesting to examine how the prisoner ' s dilemma trap can be successfully overcome. The work of Berr (2011) might be a good starting point for such an endeavor. Finally, our work could open up a new stream of research on how managerial incentive contracts can affect decisions in supply chains by departing from papers such as Yang and Zhou (2006) and Zhao and Shi (2011) . For example, the visible incentives a fi rm owner offers his/her manager are likely to affect the decisions of the rival manager ' s purchasing (strategy) decisions. Such incentives would intensify competition, which could in fl uence fi rm ' sdecisionsto single or dual source. It would be interesting to see what type of incentives is mostly likely to secure supplier resources, in case there exists considerable scarcity in the supply market