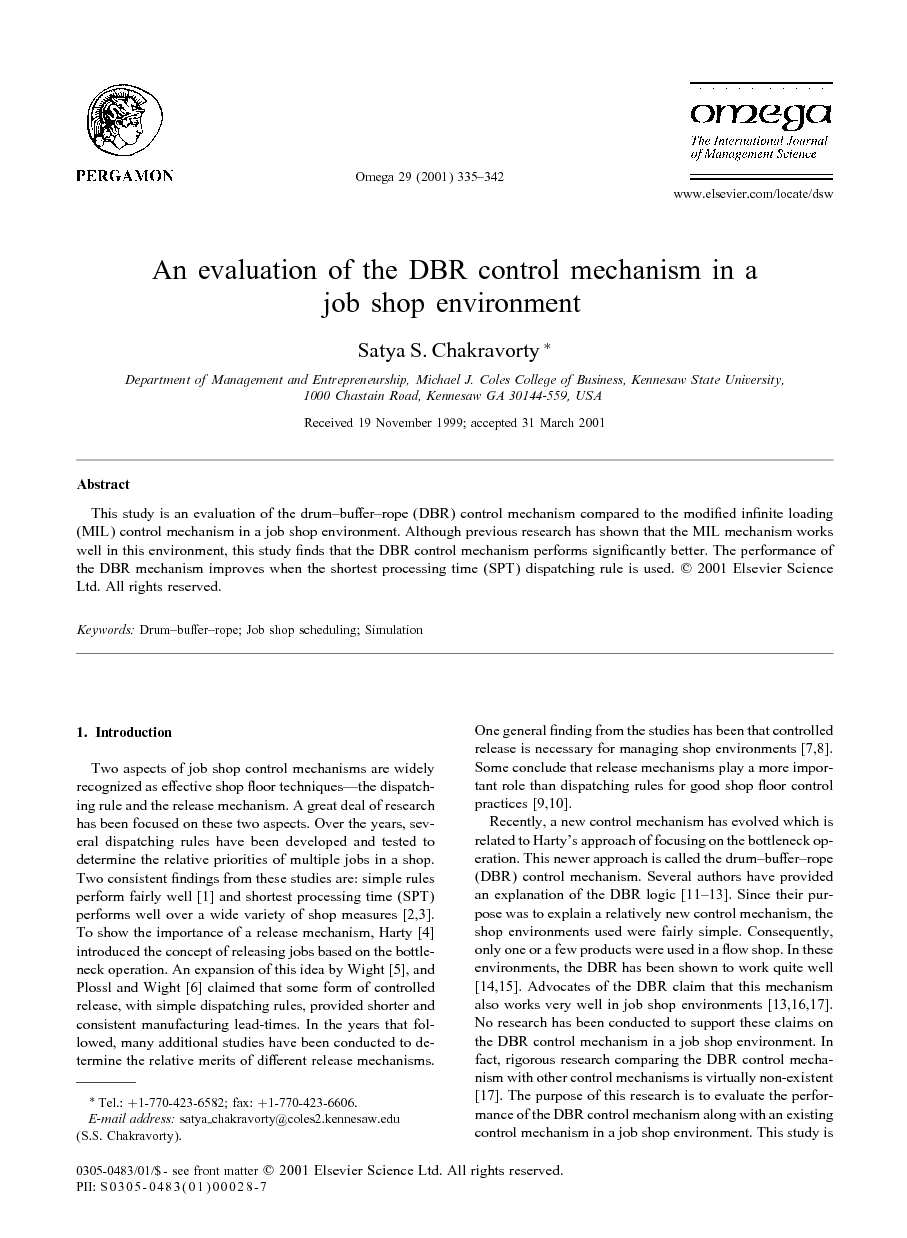 This research has two points that should be of interest to both researchers and practicing managers. First, the DBR control mechanism performs well in a job shop environment. In other words, the performance of the DBR mechanism does not deteriorate with the complexity of a job shop environment. In this study, the complexity of the job shop environment consisted of a total of 24 different routings and four product families each having a different bottleneck operation (see Fig. 1). However, the choice of product mix rendered a unique system's bottleneck operation. The system's bottleneck operation was station one (actual processing time=1.04), and the non-bottleneck operations were stations two through four (each with actual processing time=0.92). Compared to station one, stations two through four had extra capacity. This extra capacity called protective capacity is defined in the APICS dictionary as: “A given amount of extra capacity at non-constraints above the system constraint's capacity, used to protect against statistical fluctuations… Protective capacity provides non-constraints with the ability to catch up to protect throughput and due date performance” [30]. Under the DBR control mechanism, a level of protective capacity is considered to be necessary to ensure that the bottleneck is used as planned with minimum buffer size (or inventory levels). Several authors question the use of protective capacity [31], [32] and [33]. As there is a fine line between necessary protective capacity and unnecessary extra capacity, it increases the operating expenses. On the other hand, previous research [34] has shown that, in a flow shop environment, a level of protective capacity improves the performance of the DBR control mechanism. This research has shown that although the complexity involved in job shop environment is relatively more than a flow shop, the impact of protective capacity in such an environment is similar. Second, this study finds that the SPT dispatching rule performs better than the FCFS dispatching rule under the DBR control mechanism. This is not surprising because two fairly consistent findings from the use of different dispatching rules are: (1) SPT dispatching rule performs well, and (2) FCFS dispatching rule generally performs poorly [2]. What is surprising is that advocates of the DBR mechanism [12] and [13] have maintained that FCFS dispatching rule works well. It is important to understand that the reason FCFS dispatching rule performs very well under the DBR mechanism is because the mechanism does not exclusively rely on a single dispatching rule. The DBR establishes the FCFS dispatching rule as an initial setting and uses, if necessary, buffer management techniques to alter (expedite) job priorities [21]. Essentially, the technique divides a buffer into three regions, Region I, Region II, and Region III, with an associated degree of problem severity ranging from high to low. The actual content of the buffer is checked periodically and comparisons of actual versus planned items are made. The difference between the actual and planned items, referred to as a hole, is used by managers to expedite jobs to the buffer. A hole in Region I indicates that jobs are late and expediting is immediately necessary, a hole in Region II implies that jobs are somewhat late but no expediting is necessary; and a hole in Region III is considered to be normal and no specific action is necessary. This research is a first step toward evaluating the DBR control mechanism in a job shop environment. Under a set of shop conditions (e.g. shop utilization), the DBR control mechanism was compared with the MIL control mechanism using the FCFS and the SPT dispatching rules. There are many other sets of shop conditions; release mechanisms (e.g., see [22] for backward infinite loading and backward finite loading) and dispatching rules (e.g. earliest due date, critical ratio). An extension of this study would be, to evaluate the performance of the DBR mechanism, under a different set of shop conditions with different combinations of release mechanisms and dispatching rules. There is a great deal more to learn about these control mechanisms. More research in this area should prove to be useful for both researchers and practicing managers.