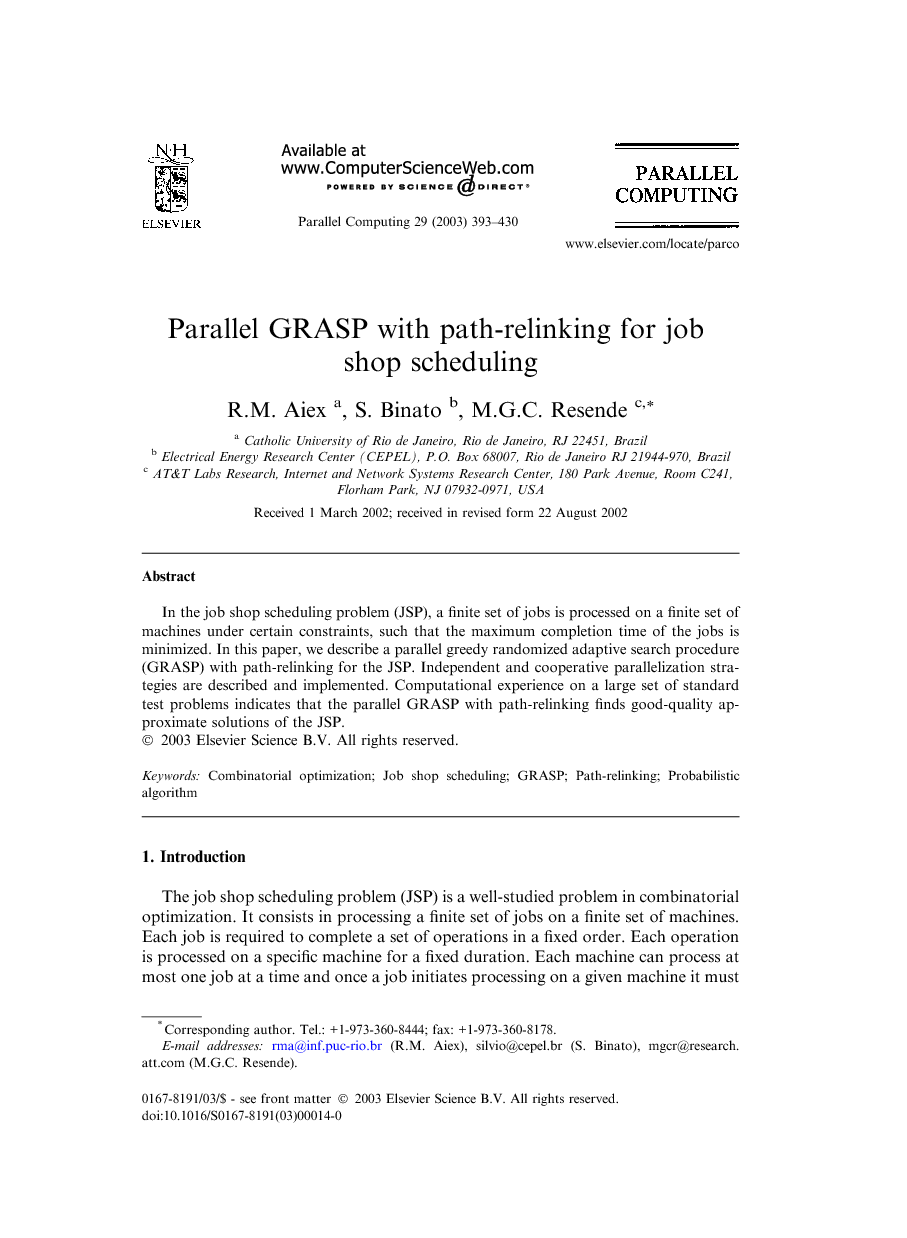 In the job shop scheduling problem (JSP), a finite set of jobs is processed on a finite set of machines under certain constraints, such that the maximum completion time of the jobs is minimized. In this paper, we describe a parallel greedy randomized adaptive search procedure (GRASP) with path-relinking for the JSP. Independent and cooperative parallelization strategies are described and implemented. Computational experience on a large set of standard test problems indicates that the parallel GRASP with path-relinking finds good-quality approximate solutions of the JSP.

We describe a new algorithm for finding approximate solutions to the JSP. This GRASP uses some of the ideas proposed in the GRASP of Binato et al. [18]. That GRASP applies an intensification strategy during the construction phase that uses information obtained from “good” solutions to implement a memory-based procedure to influence the construction phase. In the hybrid GRASP proposed in this paper, the intensification phase is moved to the end of each GRASP iteration and is done using path-relinking. Due to the high computational requirements of path-relinking, only solutions accepted by a quality criteria undergo this procedure. Furthermore, the new GRASP alternates between two semi-greedy algorithms to construct solutions, which produces a higher variety of initial solutions for the local search. The algorithm was evaluated on 66 standard test problems and was shown to produce optimal or near-optimal solutions on all instances. We observe that the hybrid GRASP with path-relinking obtains a solution of a given quality faster than the pure GRASP. Therefore, the increase in the computational time of each GRASP iteration due to the computation of path-relinking is compensated by an increase in the method’s robustness. We also verify that the intensification applied after each GRASP iteration using path-relinking outperforms the intensification strategy used in Binato et al., which is applied during the construction phase. We verify that the time to target sub-optimal solution of the proposed GRASPs fit well a two-parameter exponential distribution. Two parallelization strategies were proposed for the GRASP with path-relinking: an independent and a cooperative. The independent parallel strategy, as expected, shows a sub-linear speedup. The cooperative approach shows an approximate linear speedup for all instances tested, thus attesting that the extra time spent in communication among processes is compensated by an increase in solution quality.