عنوان انگلیسی
The impact of lot-sizing on net profits and cycle times in the n-job, m-machine job shop with both discrete and batch processing
دانلود فوری مقاله + سفارش ترجمه 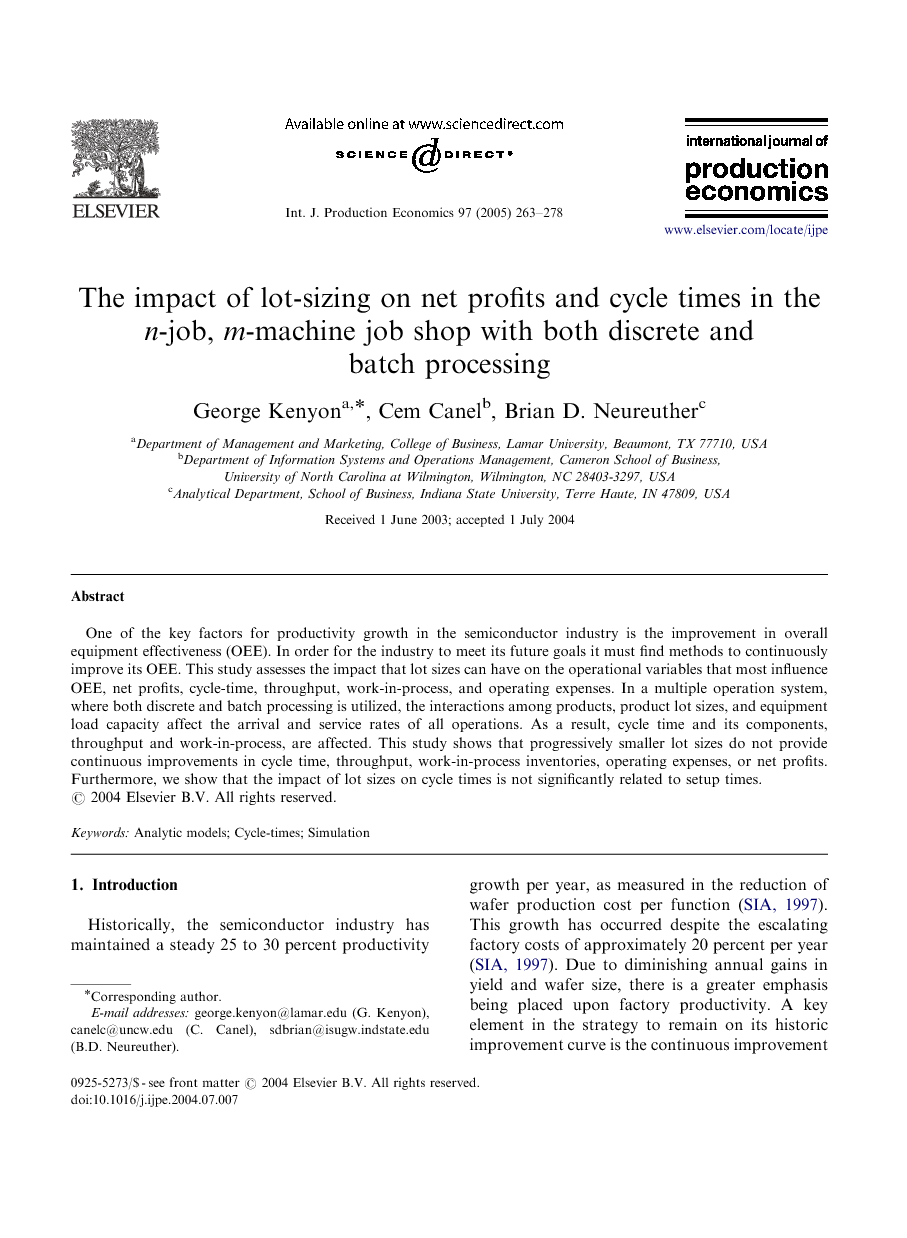 One of the key factors for productivity growth in the semiconductor industry is the improvement in overall equipment effectiveness (OEE). In order for the industry to meet its future goals it must find methods to continuously improve its OEE. This study assesses the impact that lot sizes can have on the operational variables that most influence OEE, net profits, cycle-time, throughput, work-in-process, and operating expenses. In a multiple operation system, where both discrete and batch processing is utilized, the interactions among products, product lot sizes, and equipment load capacity affect the arrival and service rates of all operations. As a result, cycle time and its components, throughput and work-in-process, are affected. This study shows that progressively smaller lot sizes do not provide continuous improvements in cycle time, throughput, work-in-process inventories, operating expenses, or net profits. Furthermore, we show that the impact of lot sizes on cycle times is not significantly related to setup times.

Historically, the semiconductor industry has maintained a steady 25 to 30 percent productivity growth per year, as measured in the reduction of wafer production cost per function (SIA, 1997). This growth has occurred despite the escalating factory costs of approximately 20 percent per year (SIA, 1997). Due to diminishing annual gains in yield and wafer size, there is a greater emphasis being placed upon factory productivity. A key element in the strategy to remain on its historic improvement curve is the continuous improvement in operating expenses per centimeter square of wafer production. The Semiconductor Industries Association (SIA) recognizes that in order to meet its future goals, improvements are needed in developing, purchasing and operating equipment and reductions in feature size, and increases in wafer diameter are no longer sufficient. Improvements in this area are measured in overall equipment effectiveness (OEE). Overall equipment effectiveness is a measure that can lead to improvements in net profit and in cost reduction. OEE can be improved by eliminating what has been termed the six big losses of a production setting (Nakajima, 1998). These include losses from (1) poor productivity and lost yield due to poor quality, (2) setup and adjustment for product mix change, (3) production losses when temporary malfunctions occur, (4) differences in equipment design speed and actual operating speed, (5) defects caused by malfunctioning equipment, and (6) start up and yield losses at the early stage of production. In support of OEE improvement, some complex job shop industries, such as the semiconductor industry, have realized that greater emphasis must be placed on factory productivity (due to diminishing annual gains in yield and wafer size). According to the SIA (1997), these OEE measurements are complementary to cost-of-ownership and throughput measurements. The SIA (1997) also has recognized that in order to exceed the 65 percent OEE barrier, improvements in factory planning and scheduling, and better modeling tools for assessing and optimizing capacity are needed. This has led the semiconductor industry to seek new ways to get more productivity from its fab investments by developing equipment and processes that improves the economics of production (Douglas, 1999). Throughout most of this century, firms produced finished goods that were stored in inventory until they were sold to the customers. In the current business environment, where speed and flexibility are key competitive factors, maintaining large inventories is unacceptable. The current trend in manufacturing has been to migrate from produce-to-stock strategies to produce-to-order and engineer-to-order strategies that curtail overhead costs, especially for finished inventory. In order to support organizational goals, operations managers have to decide how to minimize product cycle times and maximize net profits. As competition in the global marketplace increases and customers continuously demand for higher quality levels and shorter cycle times, management's decisions must focus upon quality, speed, flexibility, revenue generation, and cost reduction. Buffa (1984) stated that day-to-day operating decisions, such as lot sizing, have major strategic implications for the firm. Thus, optimally sized production lots can help meet these strategic needs. This study assesses the impacts that lot sizes and material release rates can have on net profits and cycle times, as well as, the operational variables that most influence them: throughput, work-in-process, and operating expenses. Furthermore, this study shows that contrary to conventional wisdom; setups are not the principle driver of production cycle time in the multiple product, multiple operation job shop, and that progressively smaller lot sizes do not assure cycle time or cost improvements. The next section provides an overview of the literature in this area. Section three presents an analytical model that has the objective of maximizing net profits through selection of an optimal lot size for each product. Section four describes the experiment, section five provides an analysis of the results, and section six presents the conclusions.

Cycle time in the semiconductor industry is of great concern and has undergone much evaluation as well. Chen et al. (1988) note the importance of cycle time reduction in the semiconductor industry. They state that the total cycle time for a typical circuit (VLSI) is about 4 months (i.e. 0.334 years), considering all stages of production. For customized circuits, the total lead-time imposed on customers must be at least as large as the total cycle time. If a facility can decrease cycle time, a major competitive advantage exists because the product can be delivered sooner. Furthermore, carrying inventory of standardized products is dangerous. Forecasts of market demand may be highly inaccurate due to the long manufacturing intervals. Also, product life cycles are short in the semiconductor industry; thus, the risk of obsolescence becomes a factor. Finally, there exists a negative correlation between cycle time and yield in wafer fabrication center (Chen et al., 1988). Thus, a shorter cycle time will result in increased yields due to a smaller chance of particle contamination (Atherton and Dayhoff, 1986). These same concerns are also valid for other industries. The research presented in this paper demonstrates the type of cycle time and net profit improvements that can be expected through lot size reduction, as well as establishing the existence of a lower bound on these improvements. The affect of lot sizing and the interaction of multiple products on throughput and work-in-process inventory levels have also been shown. With the selection of the best combination of lot sizes, system output can be increased, and both work-in-process and cycle time can be reduced. Furthermore, with the selection of the optimal combination of lot sizes, net profits can be maximized. With the wrong combination of lot sizes, especially at higher material release rates, the production system can become clogged with work-in-process and throughput will be diminished.