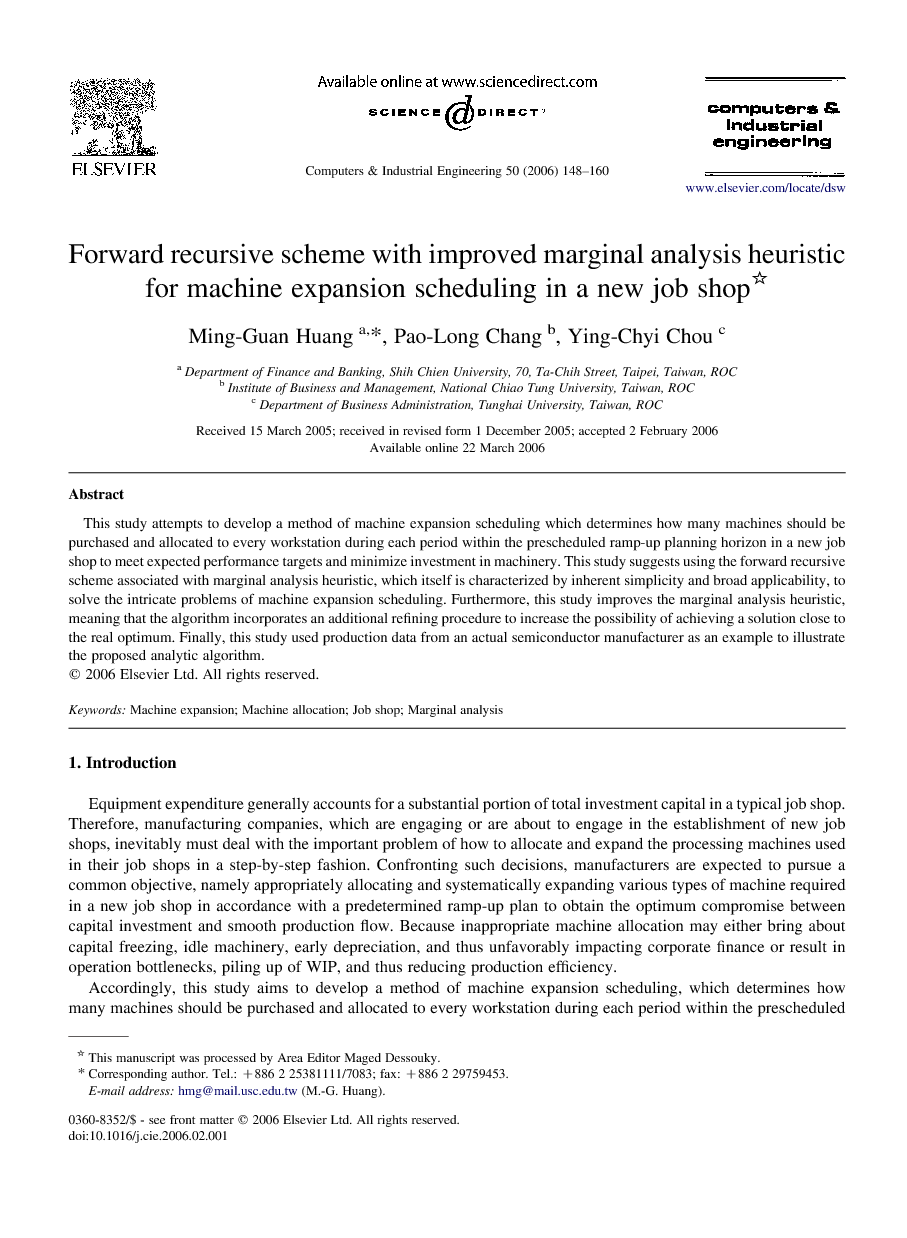 This study attempts to develop a method of machine expansion scheduling which determines how many machines should be purchased and allocated to every workstation during each period within the prescheduled ramp-up planning horizon in a new job shop to meet expected performance targets and minimize investment in machinery. This study suggests using the forward recursive scheme associated with marginal analysis heuristic, which itself is characterized by inherent simplicity and broad applicability, to solve the intricate problems of machine expansion scheduling. Furthermore, this study improves the marginal analysis heuristic, meaning that the algorithm incorporates an additional refining procedure to increase the possibility of achieving a solution close to the real optimum. Finally, this study used production data from an actual semiconductor manufacturer as an example to illustrate the proposed analytic algorithm.

Equipment expenditure generally accounts for a substantial portion of total investment capital in a typical job shop. Therefore, manufacturing companies, which are engaging or are about to engage in the establishment of new job shops, inevitably must deal with the important problem of how to allocate and expand the processing machines used in their job shops in a step-by-step fashion. Confronting such decisions, manufacturers are expected to pursue a common objective, namely appropriately allocating and systematically expanding various types of machine required in a new job shop in accordance with a predetermined ramp-up plan to obtain the optimum compromise between capital investment and smooth production flow. Because inappropriate machine allocation may either bring about capital freezing, idle machinery, early depreciation, and thus unfavorably impacting corporate finance or result in operation bottlenecks, piling up of WIP, and thus reducing production efficiency. Accordingly, this study aims to develop a method of machine expansion scheduling, which determines how many machines should be purchased and allocated to every workstation during each period within the prescheduled ramp-up planning ramp-up horizon in a new job shop to meet expected performance targets for all periods and minimize machinery investment. However, this study faces a significant challenge in the complexity of the combinatorial optimization problem involved in machine allocation. Moreover, the problem is made more difficult by the fact that the decision involves a series of interdependent expanding periods. Owing to this complexity, decision-theoretic models have not been widely applied in practice, constraining the improvement of production and finance performance. While some methods of server allocation have been put forward (e.g. Dallery and Stecke, 1990, Rajandran and Agrawal, 1996, Shanthikumar and Yao, 1987 and Shanthikumar and Yao, 1988; and others), their applicability has been restricted owing to them being focused on specific types of manufacturing or service systems. On the other hand, several developed analytic heuristics could be applied to approximately solve the combinatorial optimization problem of server allocation. Following taking account of the nature of these heuristics, this study suggests applying the marginal analysis heuristic that is characterized by its inherent simplicity and broad applicability to resolve the combinatorial optimization problems of machine allocation. A few important works have examined the characteristics and analytical procedures of the marginal analysis heuristic, including Fox, 1966, Dyer and Proll, 1977, Rolfe, 1971 and Weber, 1980, and so on. Marginal analysis heuristic has been successfully applied to resolve problems in industrial engineering and management. For example, Boxma et al., 1990 and Frenk et al., 1994 applied marginal analysis to solve allocation problems involving the identical and fixed numbers of servers working in a flexible manufacturing system. Furthermore, Connors, Feigin, and Yao (1996) also adopted the same method to allocate tools properly used in a semiconductor manufacturing system. Additionally, Loch and Kavadias (2002) used marginal analysis to beneficially select program portfolios among a number of new product developing programs. However, none of the above studies considered the problem of multi-period expansion. Boxma et al., 1990 and Frenk et al., 1994 have demonstrated that the customary marginal analysis heuristic may lead to undominated solutions, and thus is likely to be subject to the problem of solution quality if the marginal analysis was directly applied. This problem is caused primarily by interaction and dependence among the numbers of machines within workstations, and thus the optimal solution of the previous iteration in the analytic algorithm is not necessarily included in the optimal solution of the rear iteration following the introduction of a new machine. This problem of undomination can be partially remedied via incorporating an additional refining procedure as done in Frenk et al. for lessening the dependent effect and thus increasing the possibility of obtaining a solution close to the real optimal solution. Nonetheless, this study devises another simple refinement adapted from Tabu search algorithm, which could provide with search economy and be relatively easy to implement. These features make the proposed approach especially suitable for solving machine allocation problems involving large, complicated manufacturing systems. Given the above, this study proposes applying the forward recursive scheme associated with the improved marginal analysis heuristic to simultaneously work out the problem of machine allocation and expansion. Where, the improved marginal analysis heuristic suggested by this study is employed to optimize machine allocation in every period. Meanwhile, the forward recursive scheme, which starts during the first period and continues to the final period within the planning horizon, is recommended for the process of machine expansion because it appears more logical and easier to calculate and implement than backward recursion. Notably, machine expansion scheduling requires advance selection of certain desired performance measures as the performance targets and then using these specified measures as search criteria of the analytical algorithm. Consequently, an applicable and reliable performance evaluation system that can accurately gauge the desired performance measures for a given job shop, including cycle time, WIP, throughput, and so on, needs to be embedded into the proposed analytical procedure. If the performance measures resulting from selective performance evaluation system are imprecise, the alternative candidates are likely to compared on an incorrect basis, leading to an imperfect optimal solution. The quality of the solution thus depends partly on the suitability of the performance evaluation system. Although this study does not consider developing performance evaluation methods, some such systems are currently available. These systems almost were on the basis of either production simulation packages with special purposes or on quantitative methods (see Askin and Standridge, 1993 and Buzacott and Shanthikumar, 1993; for an extensive survey). Finally, this study took the method for evaluating manufacturing system performance developed by Chang, Huang, and Chou (1998), which modeled a semiconductor manufacturing system as a soluble queuing network, and used real production data from a semiconductor foundry in the Hsin-Chu Science Park, Taiwan, to illustrate the application of the proposed analytic algorithm.

This study aims to develop a method of machine expansion scheduling, which determines how many machines should be purchased and allocated to every workstation during each period within the ramp-up horizon in a new job shop under a prescheduled ramp-up plan, to meet expected performance targets for all periods while minimizing investment in machinery. Given the crucial importance of machine allocation and expansion in typical job shops, this study proposed an applicable and practicable analytic algorithm, which employs a forward recursive scheme with improved marginal analysis heuristic, to solve this problem, which commonly occurs in manufacturing. The marginal analysis heuristic has the inherent characteristics of simplicity and broad applicability. Furthermore, this study improves upon the customary marginal analysis to enhance solution quality via the refining procedure proposed in this study, which is especially useful for application to allocate machines within large, complicated manufacturing systems. Finally, a numerical example from a real-life semiconductor foundry in Taiwan was used to illustrate the use and workability of the proposed analytic procedure for developing machine expansion scheduling. To this end, the example used the analytic approximations of Chang et al. (1998) to derive the desired performance measures, namely cycle times, under a given system configuration. Two main findings could be drawn from the numerical example. First, the proposed analytical procedure offers quite an effective and practical means of solving the problem of machine allocation and expansion, even for a very complex semiconductor manufacturing system. The analytical procedure thus undoubtedly can be applied to other less complicated manufacturing systems. Second, a considerable saving in procurement cost was brought about as expected by the additional refinement.