عنوان انگلیسی
Mathematical model and genetic optimization for the job shop scheduling problem in a mixed- and multi-product assembly environment: A case study based on the apparel industry
دانلود فوری مقاله + سفارش ترجمه 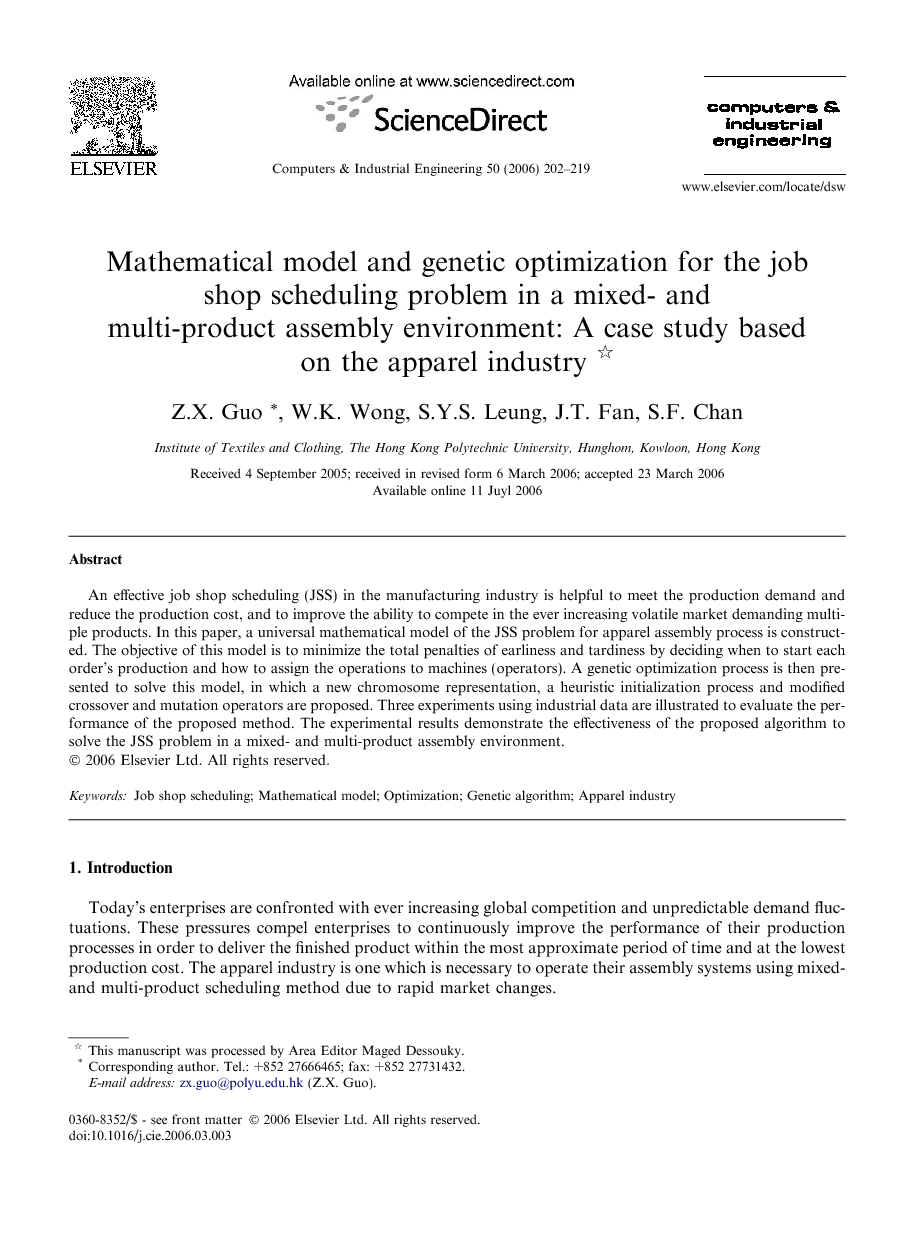 An effective job shop scheduling (JSS) in the manufacturing industry is helpful to meet the production demand and reduce the production cost, and to improve the ability to compete in the ever increasing volatile market demanding multiple products. In this paper, a universal mathematical model of the JSS problem for apparel assembly process is constructed. The objective of this model is to minimize the total penalties of earliness and tardiness by deciding when to start each order’s production and how to assign the operations to machines (operators). A genetic optimization process is then presented to solve this model, in which a new chromosome representation, a heuristic initialization process and modified crossover and mutation operators are proposed. Three experiments using industrial data are illustrated to evaluate the performance of the proposed method. The experimental results demonstrate the effectiveness of the proposed algorithm to solve the JSS problem in a mixed- and multi-product assembly environment.

This paper develops a universal mathematical model of the JSS problem for the PBS and UPS of the apparel assembly process. A means is then demonstrated to improve the effectiveness of JSS in industries requiring the scheduling of both mixed- and multi-product, utilizing the job shop operations of PBS and UPS in the apparel industry where the production scheduling and resource allocation problems are optimized in terms of a genetic optimization process. In the proposed process, a novel representation is proposed which is particularly useful to those JSS problems involving not only the processing of multiple operations on one machine but also the processing of one operation on multiple machines. On the basis of this representation, a heuristic initialization process, modified crossover and mutation operator are developed. Some production tasks from real-world PBS and UPS are effectively scheduled by the proposed method. The scheduling objective addressed in this paper will help apparel enterprises to meet due dates and decrease inventories by optimizing the use of limited resources. Our future research will focus on the effects of various uncertainties on JSS, including unpredictable customer orders, machine breakdown, shortage of materials, and absence of operators, etc.