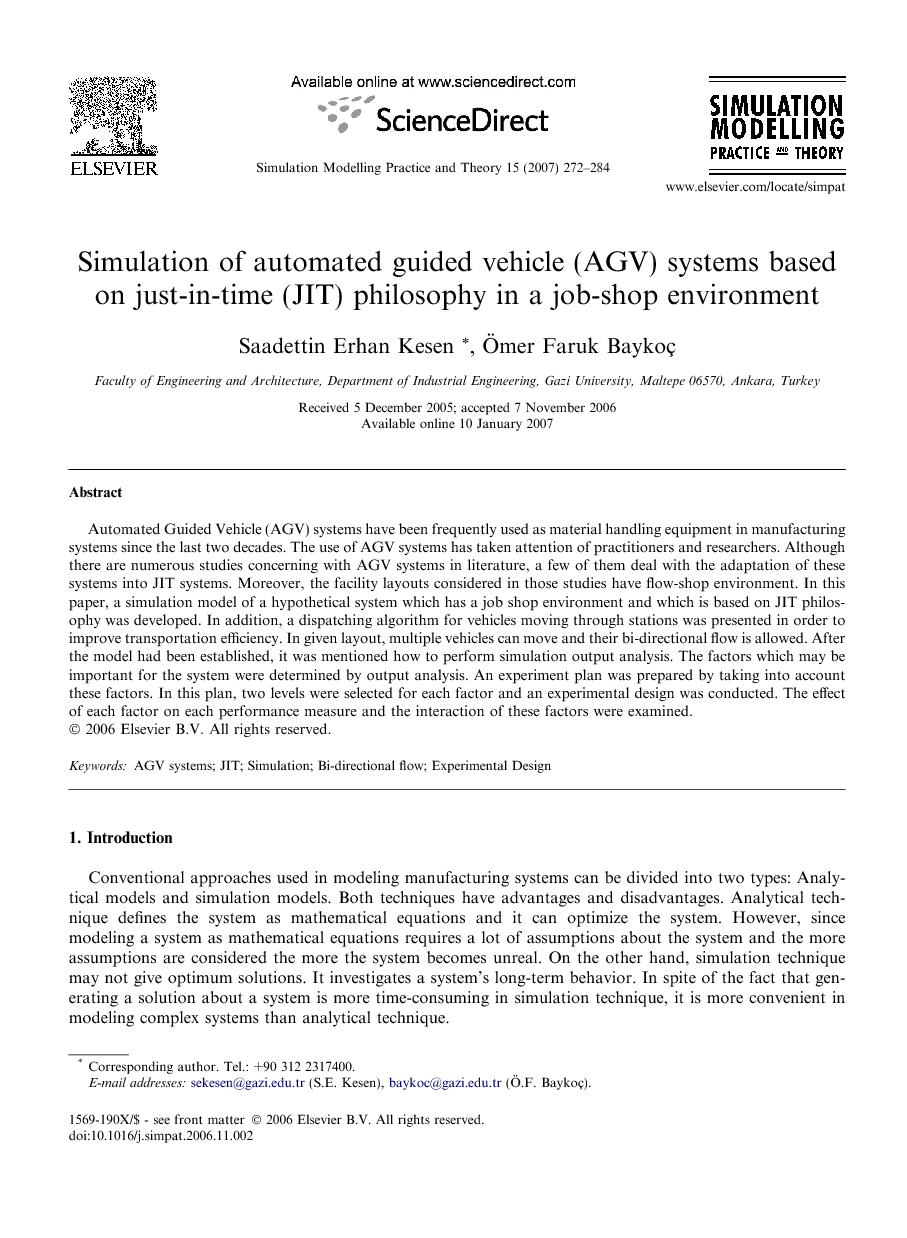 Automated Guided Vehicle (AGV) systems have been frequently used as material handling equipment in manufacturing systems since the last two decades. The use of AGV systems has taken attention of practitioners and researchers. Although there are numerous studies concerning with AGV systems in literature, a few of them deal with the adaptation of these systems into JIT systems. Moreover, the facility layouts considered in those studies have flow-shop environment. In this paper, a simulation model of a hypothetical system which has a job shop environment and which is based on JIT philosophy was developed. In addition, a dispatching algorithm for vehicles moving through stations was presented in order to improve transportation efficiency. In given layout, multiple vehicles can move and their bi-directional flow is allowed. After the model had been established, it was mentioned how to perform simulation output analysis. The factors which may be important for the system were determined by output analysis. An experiment plan was prepared by taking into account these factors. In this plan, two levels were selected for each factor and an experimental design was conducted. The effect of each factor on each performance measure and the interaction of these factors were examined.

Conventional approaches used in modeling manufacturing systems can be divided into two types: Analytical models and simulation models. Both techniques have advantages and disadvantages. Analytical technique defines the system as mathematical equations and it can optimize the system. However, since modeling a system as mathematical equations requires a lot of assumptions about the system and the more assumptions are considered the more the system becomes unreal. On the other hand, simulation technique may not give optimum solutions. It investigates a system’s long-term behavior. In spite of the fact that generating a solution about a system is more time-consuming in simulation technique, it is more convenient in modeling complex systems than analytical technique. In modeling AGV systems, because there are a lot of variables and parameters, simulation technique is extremely useful in modeling these systems. According to Banks et al. [1], Free-path transporters can move through a system without concern for delays caused by other vehicles. Guided transporters move along a fixed path and may contend with each other for space along that path. Especially, if there are multiple vehicles traveling through a system and bi-directional paths are available, vehicle routing problem emerges. Vehicle routing is known as a difficult problem in literature. To solve this problem, different policies should be developed. Also in achieving an acceptable solution to this problem, the structure of considered system plays a crucial role. According to Kimura and Terada [7], multi-stage production processes can be classified into two types: push systems and pull systems. Most of the American and European production systems employ push systems whereas the Japanese JIT systems employ pull systems. As pointed out in Baykoc and Erol [2] the main difference between the two systems is that in the pull system, the material is routed from the preceding stage to the succeeding stage according to the consumption rate of succeeding stage. Although there are numerous studies examining and investigating behaviors of AGV systems, a few of them investigate the relationship between AGV systems and JIT production philosophy. At those studies, facility layouts of systems have a flow-shop environment. Such a job-shop environment, the factors which may be important were determined. This paper aims to examine how these factors affect performance measures specified in the job-shop environment. To accomplish this, experimental design, one of the statistical procedures, was applied. By the aid of experimental design, main and interaction effects among factors and the statistical significances of these effects were clearly considered. In other words, it was desired to show that how this system reacted under different factor settings. In simulation model of considered system, demand arrivals are stochastic and, processing time of each job on each station is deterministic. The effects of four factors on the system performance measures, which are time in system (flow-time), time between consecutive jobs, throughput rate and number of jobs waiting on AGV queue, are tested. Subsequent section considers some simulation studies related to AGV systems in literature.