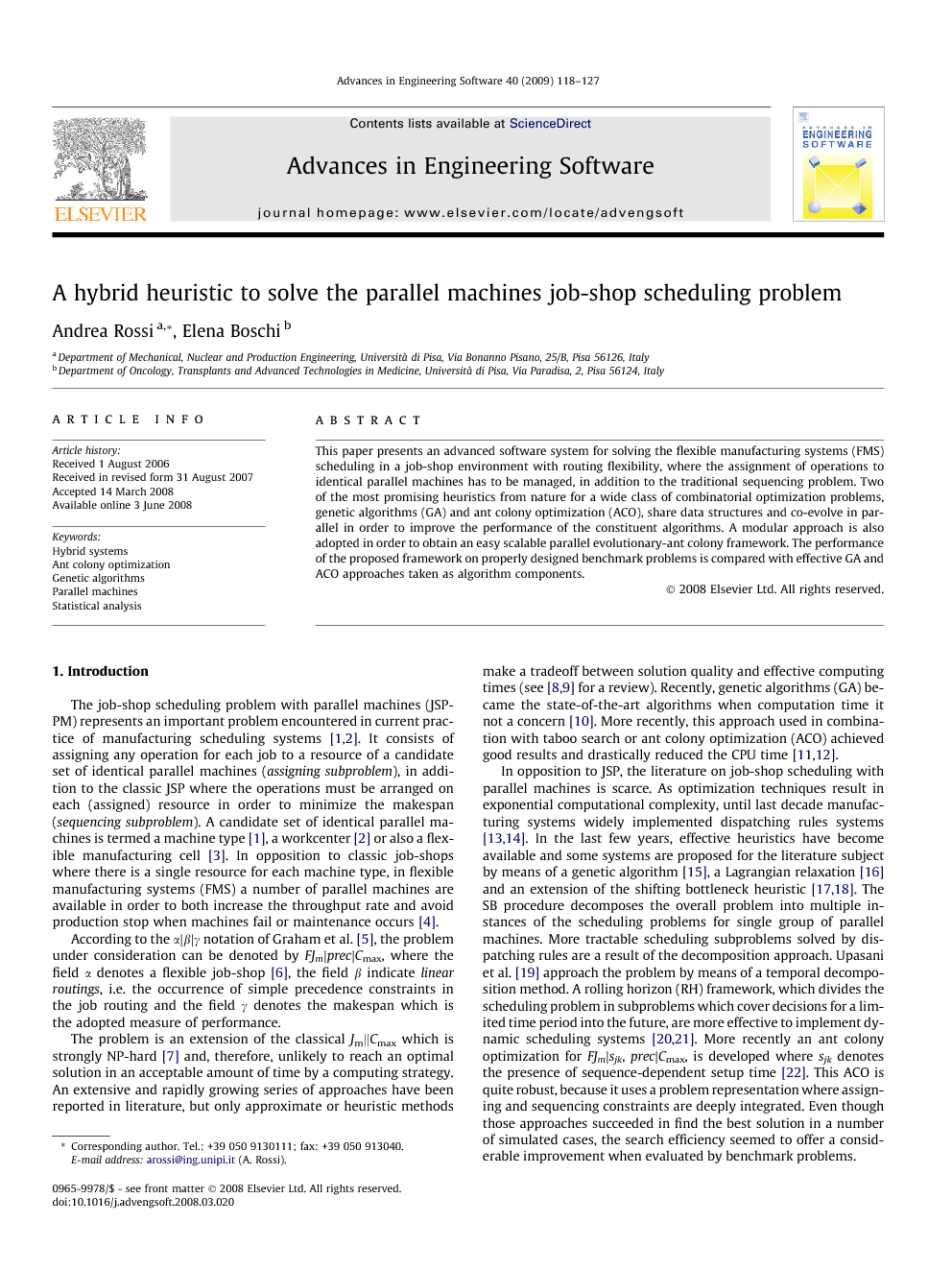 This paper presents an advanced software system for solving the flexible manufacturing systems (FMS) scheduling in a job-shop environment with routing flexibility, where the assignment of operations to identical parallel machines has to be managed, in addition to the traditional sequencing problem. Two of the most promising heuristics from nature for a wide class of combinatorial optimization problems, genetic algorithms (GA) and ant colony optimization (ACO), share data structures and co-evolve in parallel in order to improve the performance of the constituent algorithms. A modular approach is also adopted in order to obtain an easy scalable parallel evolutionary-ant colony framework. The performance of the proposed framework on properly designed benchmark problems is compared with effective GA and ACO approaches taken as algorithm components.

The paper focuses on a challenge distributed-collaborative search algorithm which hybridizes GA and ACO for the job-shop scheduling problem with parallel machines. A number of innovative skills are present in the paper. The first is the use of genetic algorithms and ant colony optimization as a mechanism of collaborative search at the algorithm level. The second aspect concerns the methods of selecting the GA subpopulations and to updating pheromone trails. Finally, the GA counterpart is reinforced in order to tackle stagnation with a method which reinitializes the subpopulations by means of the two-tournament selection. At this stage the system parameter values inherit those of the constituent algorithms. The system is able to find six new optimal solutions and to improve the performance of the constituent algorithms in 77% of proposed benchmarks. Statistical analysis is also employed to better ensure the performance when compared with that of the constituent algorithms. The proposed system performs significantly better than its GA counterpart, while it is very close to the confidence interval of 0.05% of the test statistic which ensures its superiority with respect to the ACO counterpart. As general consideration, the proposed system is a powerful mechanism and an important tool to enhance the searching capability of both genetic algorithms and ant colony systems in the optimization search. As the parameter values which give a good performance for the constituent algorithms are not necessarily good in the hybrid system, it is expected that the proposed system will offer a sharp increase in performance when a similar tool is integrated. Therefore, future work will be directed in two main directions: (i) allowing the system to automatically detect the most performing system parameters as a function of the data entry; (ii) increasing computing speed for real-time response behaviour in dynamic scheduling applications.