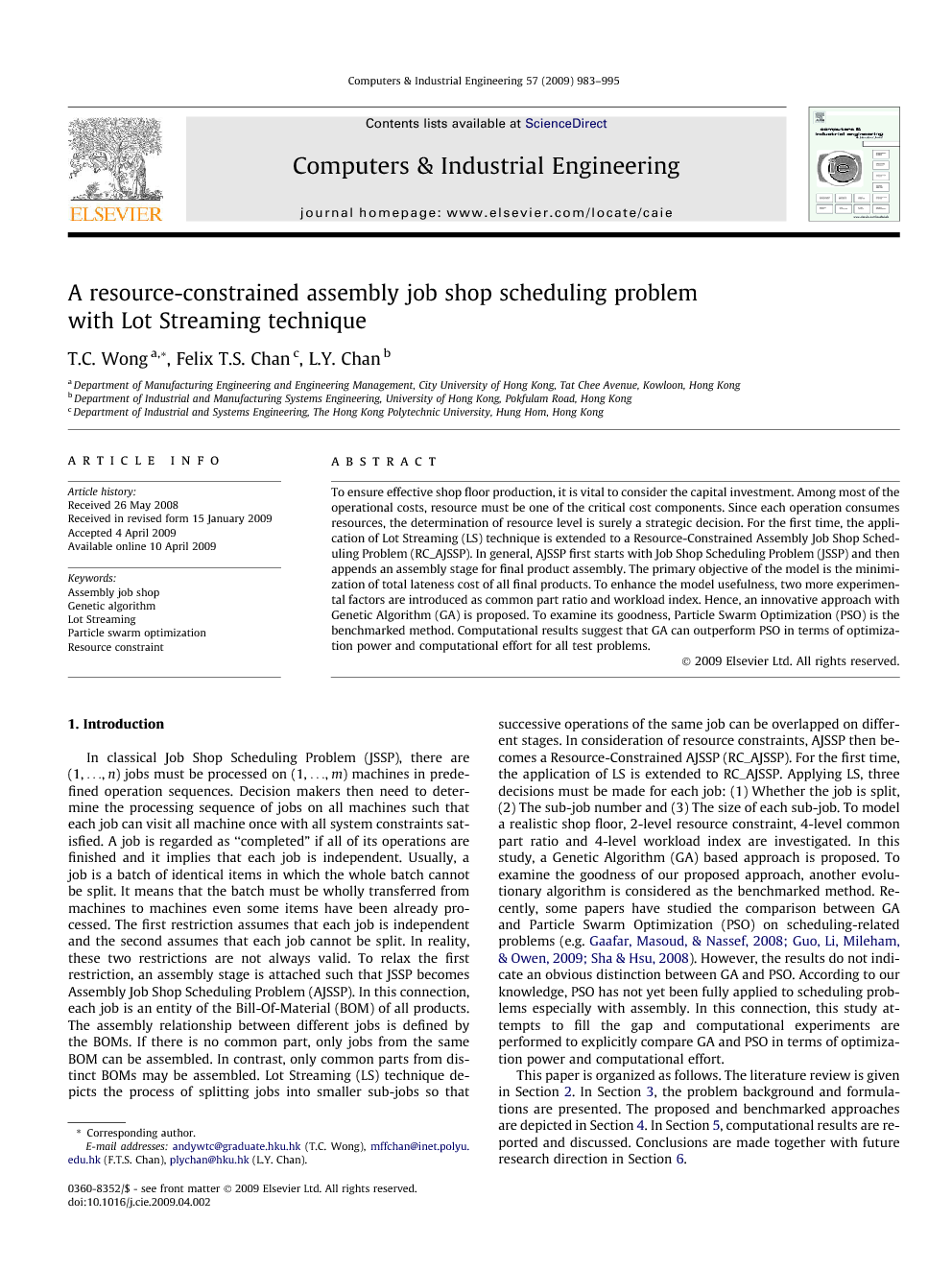 To ensure effective shop floor production, it is vital to consider the capital investment. Among most of the operational costs, resource must be one of the critical cost components. Since each operation consumes resources, the determination of resource level is surely a strategic decision. For the first time, the application of Lot Streaming (LS) technique is extended to a Resource-Constrained Assembly Job Shop Scheduling Problem (RC_AJSSP). In general, AJSSP first starts with Job Shop Scheduling Problem (JSSP) and then appends an assembly stage for final product assembly. The primary objective of the model is the minimization of total lateness cost of all final products. To enhance the model usefulness, two more experimental factors are introduced as common part ratio and workload index. Hence, an innovative approach with Genetic Algorithm (GA) is proposed. To examine its goodness, Particle Swarm Optimization (PSO) is the benchmarked method. Computational results suggest that GA can outperform PSO in terms of optimization power and computational effort for all test problems.

In classical Job Shop Scheduling Problem (JSSP), there are (1, …, n) jobs must be processed on (1, …, m) machines in predefined operation sequences. Decision makers then need to determine the processing sequence of jobs on all machines such that each job can visit all machine once with all system constraints satisfied. A job is regarded as “completed” if all of its operations are finished and it implies that each job is independent. Usually, a job is a batch of identical items in which the whole batch cannot be split. It means that the batch must be wholly transferred from machines to machines even some items have been already processed. The first restriction assumes that each job is independent and the second assumes that each job cannot be split. In reality, these two restrictions are not always valid. To relax the first restriction, an assembly stage is attached such that JSSP becomes Assembly Job Shop Scheduling Problem (AJSSP). In this connection, each job is an entity of the Bill-Of-Material (BOM) of all products. The assembly relationship between different jobs is defined by the BOMs. If there is no common part, only jobs from the same BOM can be assembled. In contrast, only common parts from distinct BOMs may be assembled. Lot Streaming (LS) technique depicts the process of splitting jobs into smaller sub-jobs so that successive operations of the same job can be overlapped on different stages. In consideration of resource constraints, AJSSP then becomes a Resource-Constrained AJSSP (RC_AJSSP). For the first time, the application of LS is extended to RC_AJSSP. Applying LS, three decisions must be made for each job: (1) Whether the job is split, (2) the sub-job number and (3) the size of each sub-job. To model a realistic shop floor, 2-level resource constraint, 4-level common part ratio and 4-level workload index are investigated. In this study, a Genetic Algorithm (GA) based approach is proposed. To examine the goodness of our proposed approach, another evolutionary algorithm is considered as the benchmarked method. Recently, some papers have studied the comparison between GA and Particle Swarm Optimization (PSO) on scheduling-related problems (e.g. Gaafar et al., 2008, Guo et al., 2009 and Sha and Hsu, 2008). However, the results do not indicate an obvious distinction between GA and PSO. According to our knowledge, PSO has not yet been fully applied to scheduling problems especially with assembly. In this connection, this study attempts to fill the gap and computational experiments are performed to explicitly compare GA and PSO in terms of optimization power and computational effort. This paper is organized as follows. The literature review is given in Section 2. In Section 3, the problem background and formulations are presented. The proposed and benchmarked approaches are depicted in Section 4. In Section 5, computational results are reported and discussed. Conclusions are made together with future research direction in Section 6.

In this paper, an innovative GA-based approach has been developed and proposed to solve RC_AJSSP with LS technique. To further enhance the complexity of the research problem, two more experimental factors have been investigated as 4-level common part ratio and 4-level workload index. An experiment has been launched to investigate the performance differences between GA and PSO. Based on the same working mechanism, GA and PSO have been compared on a number of test problems. Computational results suggested that ES is always the best LS strategy. Also, GA with ES (GA-ES) can always outperform PSO-ES for all test problems in terms of optimization power and computational effort. The data analysis has also shown the negative impacts of WI on the effect of LS to AJSSP and RC_AJSSP. However, no significant observation has been noted with the impact of CPR and this would be an open question. According to our knowledge, there is no similar study to RC_AJSSP with LS under various system conditions. In this connection, this study may provide some useful insights about the application of LS technique to RC_AJSSP. In order to further improve the model, more complicated product structure and bigger test problems will be investigated. The model objective function will be improved from single to multi-objective level such that the conflicting relationships between several system objectives could be examined. Also, some other AI techniques will be investigated such as Simulated Annealing, Ant Colony Optimization, etc.