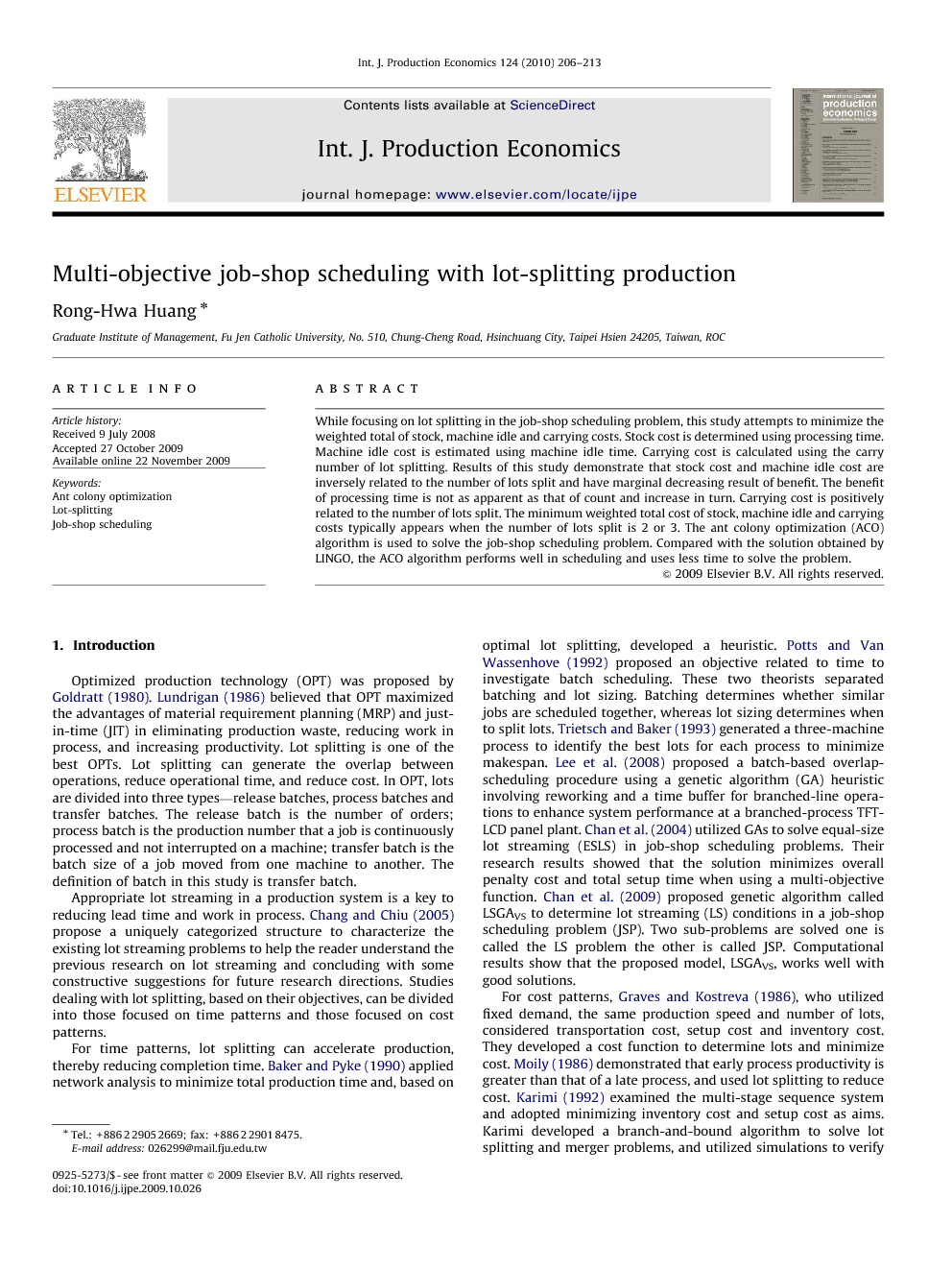 While focusing on lot splitting in the job-shop scheduling problem, this study attempts to minimize the weighted total of stock, machine idle and carrying costs. Stock cost is determined using processing time. Machine idle cost is estimated using machine idle time. Carrying cost is calculated using the carry number of lot splitting. Results of this study demonstrate that stock cost and machine idle cost are inversely related to the number of lots split and have marginal decreasing result of benefit. The benefit of processing time is not as apparent as that of count and increase in turn. Carrying cost is positively related to the number of lots split. The minimum weighted total cost of stock, machine idle and carrying costs typically appears when the number of lots split is 2 or 3. The ant colony optimization (ACO) algorithm is used to solve the job-shop scheduling problem. Compared with the solution obtained by LINGO, the ACO algorithm performs well in scheduling and uses less time to solve the problem.

Optimized production technology (OPT) was proposed by Goldratt (1980). Lundrigan (1986) believed that OPT maximized the advantages of material requirement planning (MRP) and just-in-time (JIT) in eliminating production waste, reducing work in process, and increasing productivity. Lot splitting is one of the best OPTs. Lot splitting can generate the overlap between operations, reduce operational time, and reduce cost. In OPT, lots are divided into three types—release batches, process batches and transfer batches. The release batch is the number of orders; process batch is the production number that a job is continuously processed and not interrupted on a machine; transfer batch is the batch size of a job moved from one machine to another. The definition of batch in this study is transfer batch. Appropriate lot streaming in a production system is a key to reducing lead time and work in process. Chang and Chiu (2005) propose a uniquely categorized structure to characterize the existing lot streaming problems to help the reader understand the previous research on lot streaming and concluding with some constructive suggestions for future research directions. Studies dealing with lot splitting, based on their objectives, can be divided into those focused on time patterns and those focused on cost patterns. For time patterns, lot splitting can accelerate production, thereby reducing completion time. Baker and Pyke (1990) applied network analysis to minimize total production time and, based on optimal lot splitting, developed a heuristic. Potts and Van Wassenhove (1992) proposed an objective related to time to investigate batch scheduling. These two theorists separated batching and lot sizing. Batching determines whether similar jobs are scheduled together, whereas lot sizing determines when to split lots. Trietsch and Baker (1993) generated a three-machine process to identify the best lots for each process to minimize makespan. Lee et al. (2008) proposed a batch-based overlap-scheduling procedure using a genetic algorithm (GA) heuristic involving reworking and a time buffer for branched-line operations to enhance system performance at a branched-process TFT-LCD panel plant. Chan et al. (2004) utilized GAs to solve equal-size lot streaming (ESLS) in job-shop scheduling problems. Their research results showed that the solution minimizes overall penalty cost and total setup time when using a multi-objective function. Chan et al. (2009) proposed genetic algorithm called LSGAVS to determine lot streaming (LS) conditions in a job-shop scheduling problem (JSP). Two sub-problems are solved one is called the LS problem the other is called JSP. Computational results show that the proposed model, LSGAVS, works well with good solutions. For cost patterns, Graves and Kostreva (1986), who utilized fixed demand, the same production speed and number of lots, considered transportation cost, setup cost and inventory cost. They developed a cost function to determine lots and minimize cost. Moily (1986) demonstrated that early process productivity is greater than that of a late process, and used lot splitting to reduce cost. Karimi (1992) examined the multi-stage sequence system and adopted minimizing inventory cost and setup cost as aims. Karimi developed a branch-and-bound algorithm to solve lot splitting and merger problems, and utilized simulations to verify algorithm effectiveness. Low et al. (2004) determined the benefit of each lot-splitting situation, including same batch size and different batch size, in a job-shop environment. They then constructed a mathematical programming model to determine the optimal solution and compared the efficiency of their statistical analysis method with same batch size and different batch size. The objective in this study is to minimize the sum material processing cost, setup time cost and inventory cost. In discussing lot splitting, one should consider additional costs due to lot splitting, such as setup cost when each batch passes a machine. This study considers the carrying cost of every batch. When a batch is carried from one machine to another, this is regarded as one carry. As the number of batches increases, carrying time increases. In actual production, a plant may change carrying containers in a timely manner due to the increased number of batches, the smaller size of each batch, or may use the same carrying containers regardless of batch size, such when using the same pallet or carrying car. This study is based on the use of a carrying car. We assume each carry has fixed costs, regardless of batch size. This study uses ant colony optimization (ACO), and generates a heuristic algorithm to rapidly solve the lot-splitting problem in the job-shop scheduling problem. Drorigo (1992) first developed ACO. In the ACO algorithm, artificial ants are created by a program that simulates the natural behavior of ants. These artificial ants solve problems based on three principal characteristics: (1) ants prefer routes with high amounts of pheromone; (2) pheromone accumulates faster on short routes than on long routes; and (3) ants can communicate indirectly via the pheromone. Furthermore, artificial ants can identify superior routes (exploitation) and unsearched combinations of routes (exploration) to acquire improved solutions. Application of the ant system includes a traveling salesman, quadratic assignment, flowshop scheduling, and job-shop scheduling (Colorni et al., 1994; Gajpal and Rajendran, 2006; Lin et al., 2008; Huang and Yang, 2008). While measuring scheduling performance principles, this study considers multiple objectives in scheduling performance such as “work-in-process inventory cost,” which is flow time multiplied by a given cost weight, “machine idle cost,” which is machine idle time (MIT) multiplied by a cost weight, and transport cost, which is derived by the number of batches. When considering lot-splitting production, it can decrease the total completion time, flow time and machine idle time, and then reduce the production cost. But lot-splitting production will increase the carrying cost because of the number of batches increased. Hence, this study combines the total cost of work-in-process inventory cost, machine idle cost, and carrying cost as the measurement for order scheduling in this study.