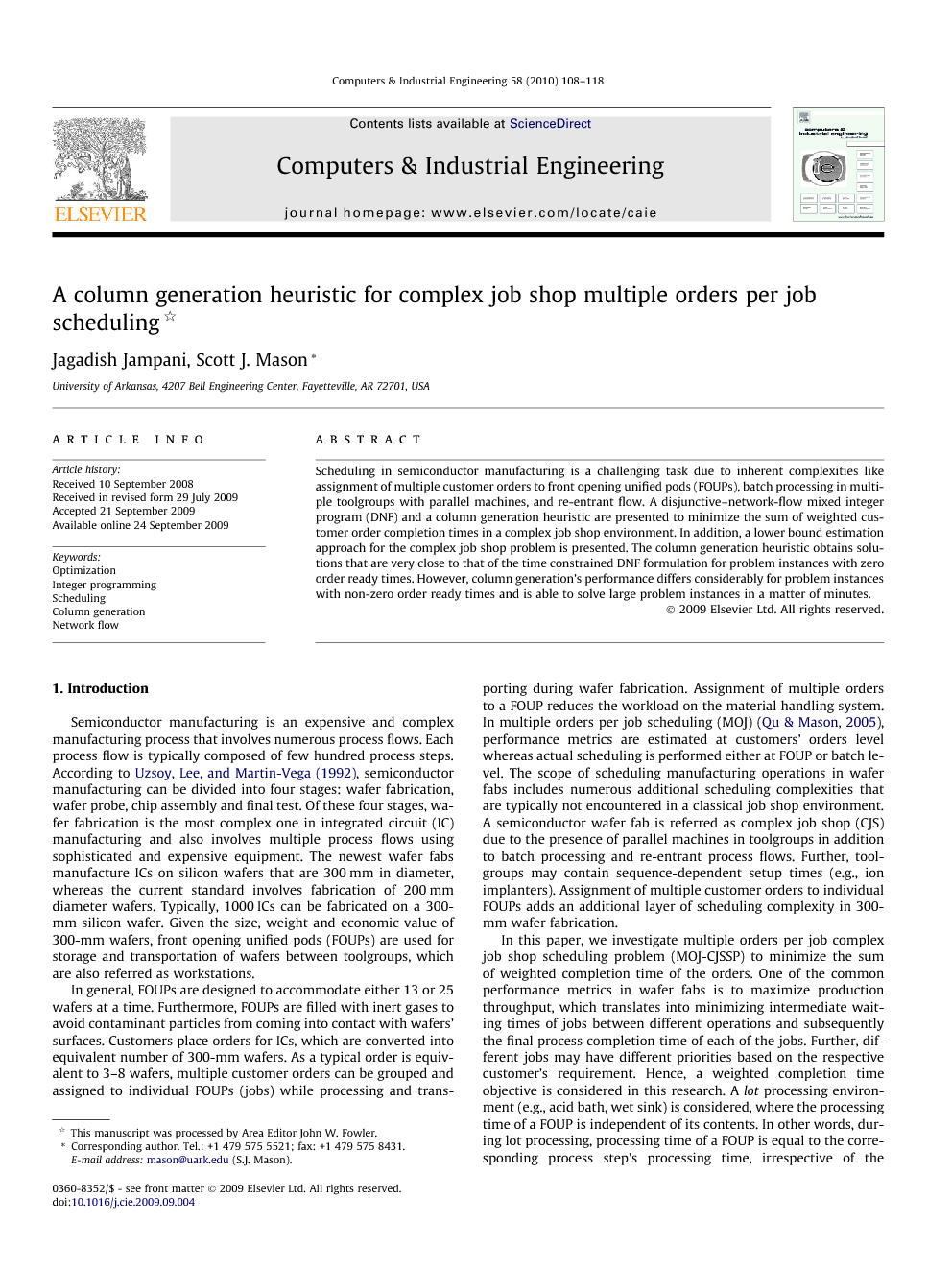 Scheduling in semiconductor manufacturing is a challenging task due to inherent complexities like assignment of multiple customer orders to front opening unified pods (FOUPs), batch processing in multiple toolgroups with parallel machines, and re-entrant flow. A disjunctive–network-flow mixed integer program (DNF) and a column generation heuristic are presented to minimize the sum of weighted customer order completion times in a complex job shop environment. In addition, a lower bound estimation approach for the complex job shop problem is presented. The column generation heuristic obtains solutions that are very close to that of the time constrained DNF formulation for problem instances with zero order ready times. However, column generation’s performance differs considerably for problem instances with non-zero order ready times and is able to solve large problem instances in a matter of minutes.

In this research, multiple orders per job complex job shop scheduling problem with an objective of minimizing the sum of weighted completion times of the orders is addressed. Complex job shop scheduling problem includes the complexities involved in semiconductor manufacturing like assignment of orders to FOUPs, batch processing on the available machines in different toolgroups and re-entrant flows based on the process’s recipe. Disjunctive–network-flow formulation and column generation heuristic approaches are introduced to address the MOJ-CJSSP. In the experimental study, a mini-fab model and a range of problem instances are used to analyze the effectiveness of the presented approaches. From the computational results, it is observed that column generation’s solutions are on average within 2% and 13% of the DNF model’s solutions in problem instances without and with non-zero order ready times, respectively. Furthermore, a lower bound estimation approach is presented to analyze the solutions’ quality. Future research includes developing more effective solution approaches to improve the solution quality of the problem instances with non-zero orders’ ready times. Further, multiple orders per job processing in an item processing environment can be explored. In an item processing environment, the processing time of a FOUP is dependent on the number of assigned wafers. During wafer fabrication, orders visit both lot and item processing toolgroups during different process steps. But, in this research, only a set of lot processing toolgroups was considered. To address any large wafer fab scheduling problem, it is expected that the problem has to be decomposed into multiple mini-fabs. The presented MIP and CG can be applied to the decomposed mini-fabs with only lot processing toolgroups. Both the lot and item processing mini-fabs can be optimized individually and the solutions of the decomposed sub-problems can be concatenated together to obtain the final solution. This decomposition and concatenation process involves significant complexity and is an area for future research. In addition, this research can be further extended to address problems with sequence-dependent setup times and compatible and incompatible batching, where customer orders are segregated into different families.