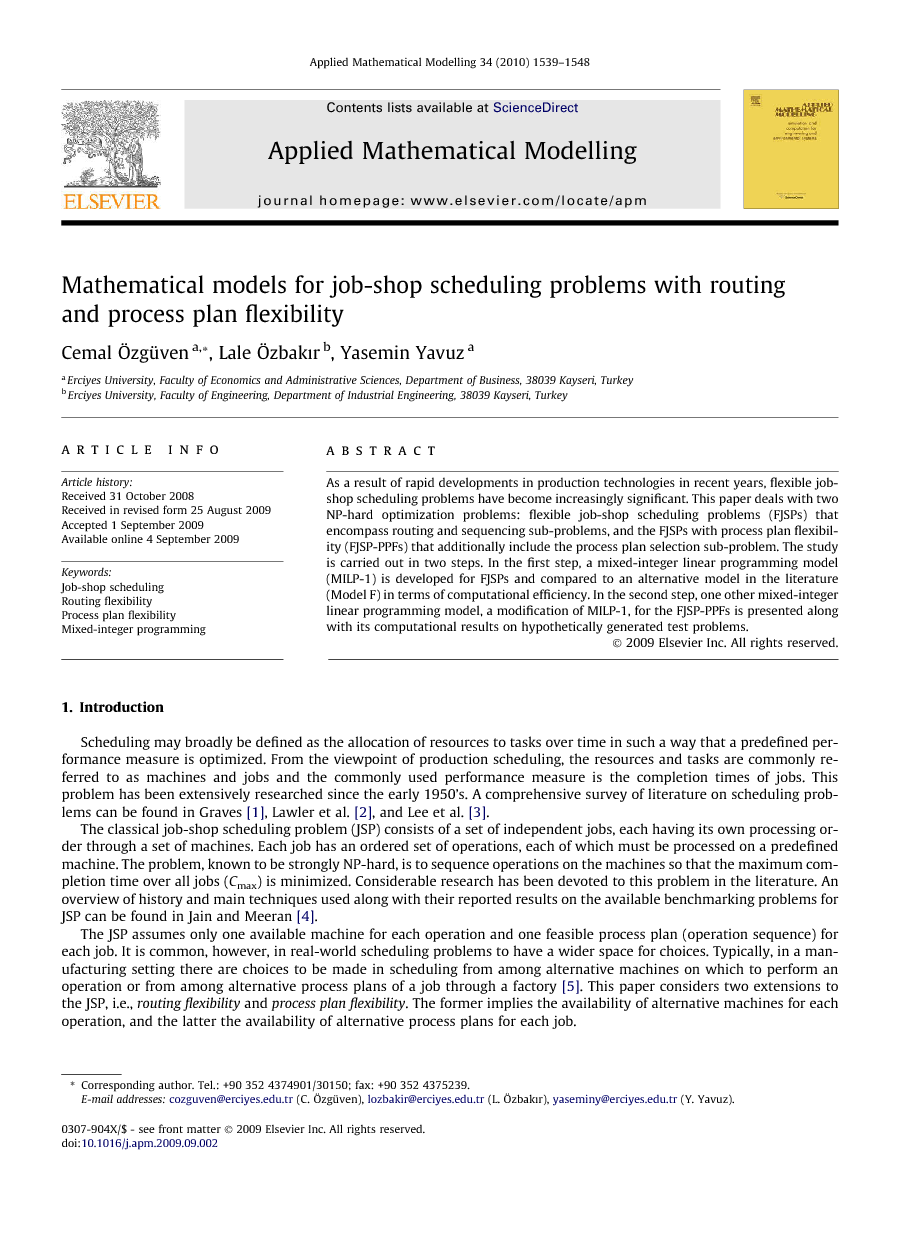 As a result of rapid developments in production technologies in recent years, flexible job-shop scheduling problems have become increasingly significant. This paper deals with two NP-hard optimization problems: flexible job-shop scheduling problems (FJSPs) that encompass routing and sequencing sub-problems, and the FJSPs with process plan flexibility (FJSP-PPFs) that additionally include the process plan selection sub-problem. The study is carried out in two steps. In the first step, a mixed-integer linear programming model (MILP-1) is developed for FJSPs and compared to an alternative model in the literature (Model F) in terms of computational efficiency. In the second step, one other mixed-integer linear programming model, a modification of MILP-1, for the FJSP-PPFs is presented along with its computational results on hypothetically generated test problems.

This study started with the FJSP, the generalized form of the JSP. In the first step, a mixed-integer linear programming model (MILP-1) is developed for the FJSPs. MILP-1 is then compared to the only alternative model we found in the literature and its superiority over Model F in terms of model size, CPU time and Cmax value is displayed. In the second step, process plan flexibility is incorporated into FJSP, and MILP-1 is modified accordingly to give rise to MILP-2, for which there appears to be no comparable mathematical model in the literature. Hypothetical test problems that involve routing and process plan flexibility are used for testing MILP-2. The computational results on a variety of test problems with different sizes and flexibility levels are presented and evaluated. Makespan is adopted as the single performance measure in MILP-1 due to the fact that it is the single measure used in the model that MILP-1 is compared with in this paper, namely Model F. Since it is an extension of MILP-1, we chose to retain the makespan as the single measure in MILP-2. It must however be mentioned that additional measures such as total tardiness, the number of tardy jobs and the load balance of the machines can readily be incorporated into MILP-2. The authors of this paper are planning as a future study to develop a general framework model that embodies sequence-dependent setup times and process plan costs along with routing and process plan