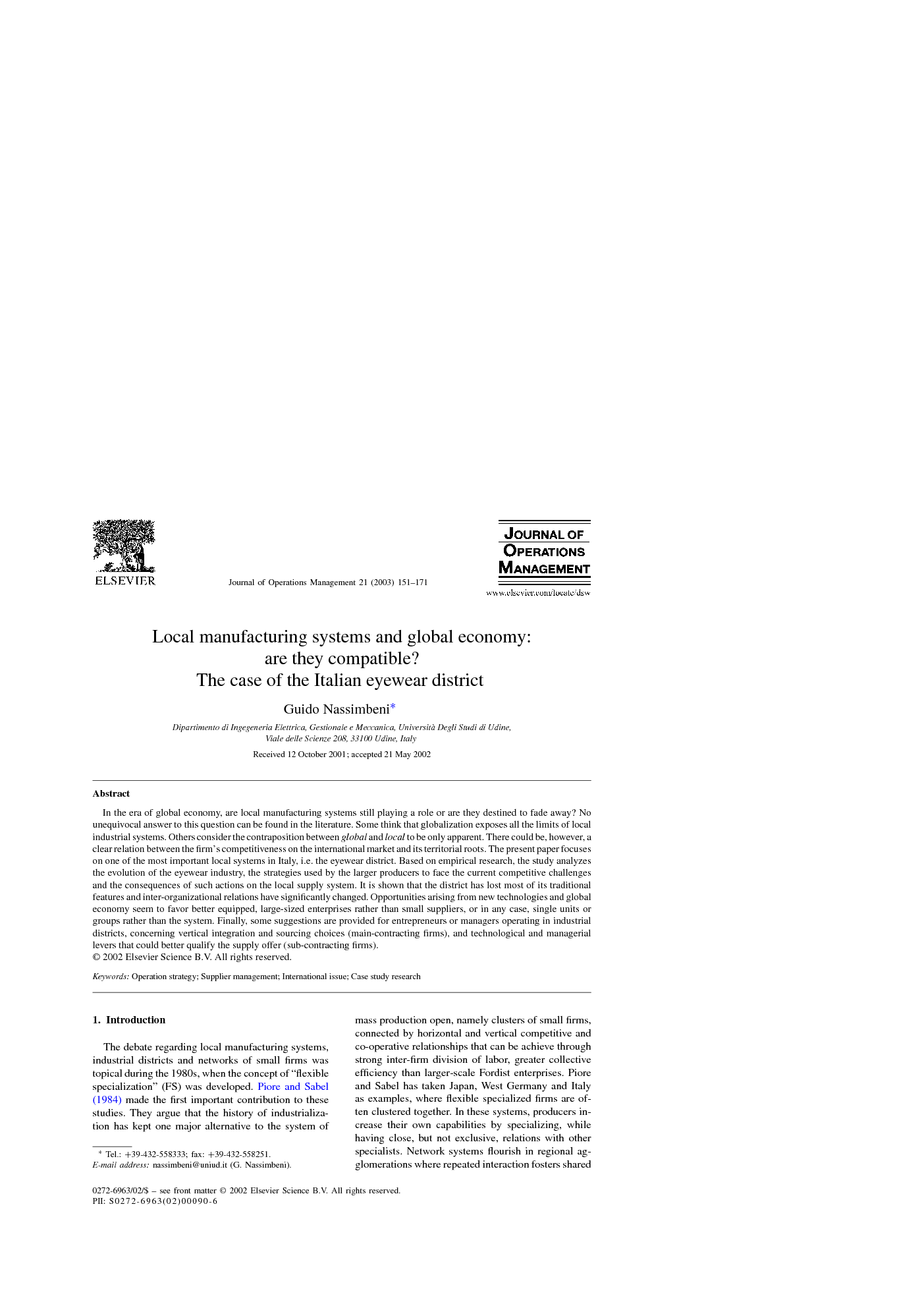 In the era of global economy, are local manufacturing systems still playing a role or are they destined to fade away? No unequivocal answer to this question can be found in the literature. Some think that globalization exposes all the limits of local industrial systems. Others consider the contraposition between global and local to be only apparent. There could be, however, a clear relation between the firm’s competitiveness on the international market and its territorial roots. The present paper focuses on one of the most important local systems in Italy, i.e. the eyewear district. Based on empirical research, the study analyzes the evolution of the eyewear industry, the strategies used by the larger producers to face the current competitive challenges and the consequences of such actions on the local supply system. It is shown that the district has lost most of its traditional features and inter-organizational relations have significantly changed. Opportunities arising from new technologies and global economy seem to favor better equipped, large-sized enterprises rather than small suppliers, or in any case, single units or groups rather than the system. Finally, some suggestions are provided for entrepreneurs or managers operating in industrial districts, concerning vertical integration and sourcing choices (main-contracting firms), and technological and managerial levers that could better qualify the supply offer (sub-contracting firms).

The debate regarding local manufacturing systems, industrial districts and networks of small firms was topical during the 1980s, when the concept of “flexible specialization” (FS) was developed. Piore and Sabel (1984) made the first important contribution to these studies. They argue that the history of industrialization has kept one major alternative to the system of mass production open, namely clusters of small firms, connected by horizontal and vertical competitive and co-operative relationships that can be achieve through strong inter-firm division of labor, greater collective efficiency than larger-scale Fordist enterprises. Piore and Sabel has taken Japan, West Germany and Italy as examples, where flexible specialized firms are often clustered together. In these systems, producers increase their own capabilities by specializing, while having close, but not exclusive, relations with other specialists. Network systems flourish in regional agglomerations where repeated interaction fosters shared identities and mutual trust while at the same time intensifying competitive rivalries. It appears that the flexible specialization model is one of the consequences of overtaking Fordism–Taylorism. However, for some time the future of local systems and their real effectiveness as an alternative to Fordism has been questioned. In the era of global economy, are local systems still playing a role or are they destined to fade away? The issue is crucial, especially for a country like Italy where, local systems have been and still are a fundamental part of the industrial system. However, no unequivocal answer to this question can be found in the literature. Some scholars believe that globalization reveals all the limits of local industrial systems. These limits could be due to the district enterprise, for example, because of general under-sizing, it is difficult for it to obtain adequate technology and financial aid, consequently there is a delay in the introduction of new technologies and other radical innovations, and the sales marketing systems are weak. Other limits are vice versa attributable to the network, the agglomeration of these units, whose external economies seem to be progressively weakening. Many local systems blame the excessive dispersion of added value and the difficulty in developing combined and coherent strategic moves. Globalization (of the markets, competition, work distribution, and informative networks) urges district enterprises to pass beyond the local borders, recommending collaboration over an extended geographical area and modifying the district values and rules. Other researchers consider the contraposition between global and local only apparent. There could be a clear relation between the firm’s competitiveness on the international market and its territorial roots, since the local system constitutes an irreplaceable sourcing area for new competencies, creativity, and variety. Becattini (1999), one of the most influential Italian scholars, writes about “re-blooming” of industrial districts, whose number and profit rate seem to have grown in the last few decades. A series of studies and empirical evidence supports this perspective ( Porter, 1990, Porter, 1998, Signorini, 1994 and Fabiani et al., 1998). The future of industrial districts, or more generally, the aspects and problematics of local manufacturing systems, though central to the subject, have rarely been discussed by Operations Management (OM) researchers. Industrial districts are specific manufacturing systems that are gradually being transformed by current changes in competitive environments. In this paper, first the literature concerning the evolution and prospects of local manufacturing systems is reviewed. Next, according to the OM literature on manufacturing strategies and typologies, the industrial districts are characterized. The challenges posed by globalization to the assumptions underlying the flexible specialization model are pointed out. Then the study focuses on one of the most important local systems in Italy, i.e. the eyewear district. It produces more than 80% of the eyewear, which is one of the leading sectors in the Italian “fashion” system with an output whose value is approximately € 1.75 billion. This district is passing through a phase of transformation. In the past, the district formula enabled Italian producers to achieve cost advantages, and mix and volume flexibility. Today it is difficult for such a formula to satisfy the global market which requires the producers to shorten product development time, produce new models faster and more frequently, and better differentiate the product (especially quality and design) from that of international competitors, who are stronger in terms of innovation (Japan) and costs (south-east Asia). The local system is often inadequate to such an extent that various producers are internalizing some processes or rationalizing the supplier base, so as to achieve greater control of quality, times and costs. As a result, relations in the district, and kind and type of local sub-contracting firms involvement are gradually changing. Based on an empirical research, the evolution of the eyewear industry and the strategic response of large producers to present-day changes are analyzed. Particular attention is given to supply policies and their effects on the local sub-contracting system. In addition, the characteristics, technological and managerial profiles of the local supply system are examined to determine weaknesses. Finally, entrepreneurs or managers operating in the industrial districts are given some indications about vertical integration and sourcing choices (main-contracting firms), and technological and managerial tools and practices (sub-contracting firms). The paper is arranged as follows: Section 2 reviews some of the main issues arising from the debate on local manufacturing systems and their evolution. A specific subsection is devoted entirely to the key OM aspects that characterize local manufacturing systems. Then the research objectives are introduced (Section 4), followed by the methodology (Section 5) and the results of the empirical research on the main-contractors’ (Section 6) and sub-contractors’ (Section 7) sides. The last two sections contain an interpretative model of the temporal evolution of the district, hypotheses on future developments, the implications for entrepreneurs and managers, and concluding remarks.

The eyewear industry has undergone major changes in the recent years. These have generally aided the larger companies with sufficient strategic planning capabilities, financial resources and managerial expertise to face present challenges. The transformations have, however, shown up all the limits of the smaller district enterprises. Leading firms are re-engineering the main processes so that they can offer better quality and time to market. This restructuring means, either internalization of production, or rationalization and selection of sub-contracting relationships. Main-contractors require a pool of suppliers with advanced design and manufacturing equipment and tools suited for the synchronized management of the production. This investigation demonstrates that “preferred” suppliers are superior in terms of technological profile, design expertise, instruments, and investment capability. These characteristics are lacking in most local suppliers. The transformations taking place in the eyewear districts are paralleled in other Italian districts, for example the hierarchization process, subsequent development through internal or external lines, and gradual impoverishment of the local system (Carminucci and Casucci, 1997). Similarities can be found also in some Italian enterprises that in the past made wide use of the local production network, such as Benetton (Camuffo et al., 2001). Is the district formula destined to decline? The industry and the district are still changing so a verdict is not possible. However, the transfer of production to the countries with a lower work-force cost, even if still at the experimental stage, has given dubious results. And although a certain volume of supplies comes from outside the district (far east), this mainly concerns non-critical parts and components of cheaper product lines. It is still possible that technical-productive traditions and geographic proximity between the leading firms and their local sub-contractors will play a role. Geographic proximity also means cultural affinity, a common language, and more frequent and direct interactions. However, it is beyond doubt that the inter-firm relations currently developing in the district are distant from the “Marshallian” concepts. The relational “atmosphere” and co-operative spirit that cemented the “canonical” district seem to have been surpassed by vigorous competitive attitudes, and crushed by the rigid supplier selection criteria of the leading firms. Nevertheless the best sub-contractors still complement the operations of the leading firm thereby perpetuating a territorial concentration of eyewear manufacturers. On the other hand, concentration alone is not enough to qualify a group of enterprises as an industrial district, at least not in the “canonical” sense of the term.