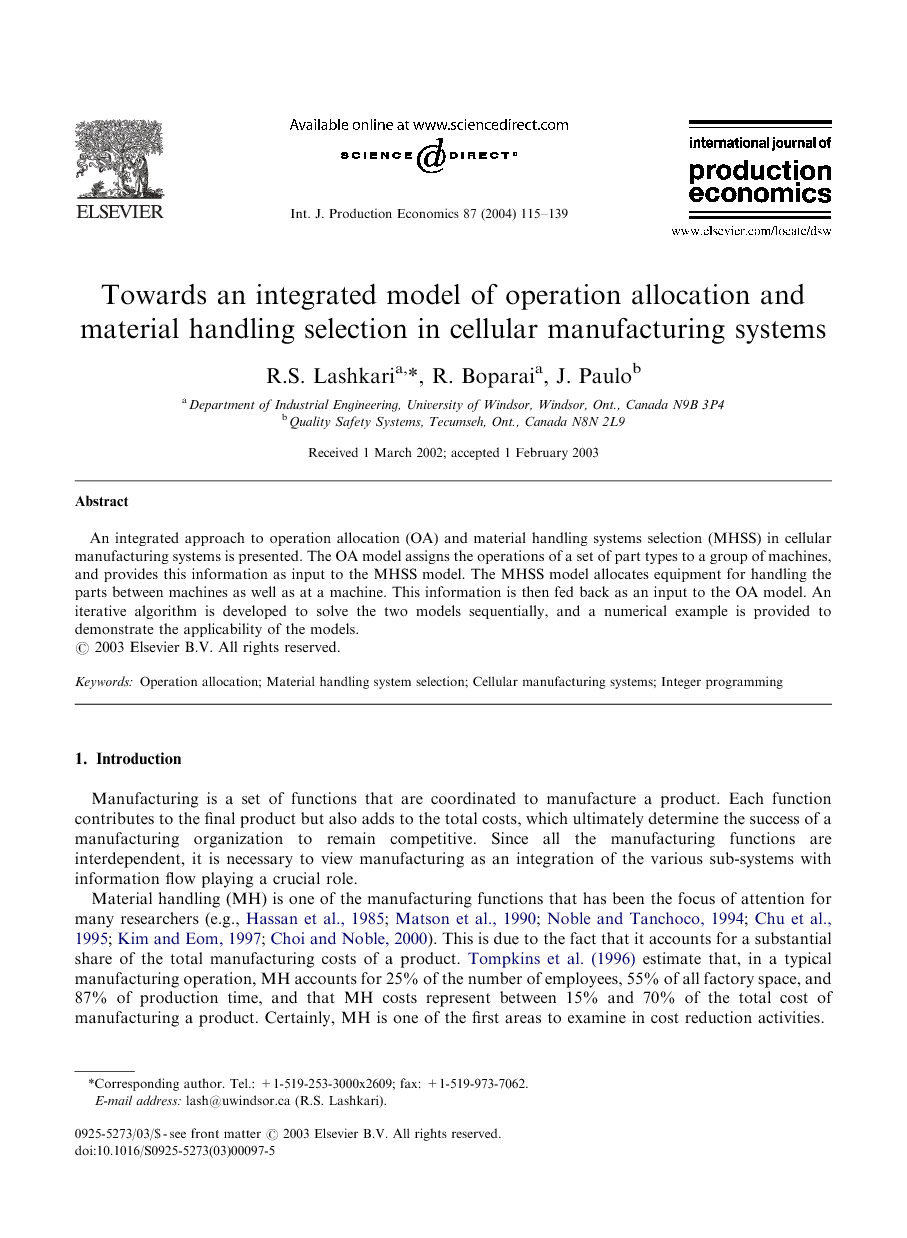 An integrated approach to operation allocation (OA) and material handling systems selection (MHSS) in cellular manufacturing systems is presented. The OA model assigns the operations of a set of part types to a group of machines, and provides this information as input to the MHSS model. The MHSS model allocates equipment for handling the parts between machines as well as at a machine. This information is then fed back as an input to the OA model. An iterative algorithm is developed to solve the two models sequentially, and a numerical example is provided to demonstrate the applicability of the models.

Manufacturing is a set of functions that are coordinated to manufacture a product. Each function contributes to the final product but also adds to the total costs, which ultimately determine the success of a manufacturing organization to remain competitive. Since all the manufacturing functions are interdependent, it is necessary to view manufacturing as an integration of the various sub-systems with information flow playing a crucial role. Material handling (MH) is one of the manufacturing functions that has been the focus of attention for many researchers (e.g., Hassan et al., 1985; Matson et al., 1990; Noble and Tanchoco, 1994; Chu et al., 1995; Kim and Eom, 1997; Choi and Noble, 2000). This is due to the fact that it accounts for a substantial share of the total manufacturing costs of a product. Tompkins et al. (1996) estimate that, in a typical manufacturing operation, MH accounts for 25% of the number of employees, 55% of all factory space, and 87% of production time, and that MH costs represent between 15% and 70% of the total cost of manufacturing a product. Certainly, MH is one of the first areas to examine in cost reduction activities. In recent years, increased demand for flexibility in manufacturing systems has led to the development of flexible and cellular manufacturing systems (FMS and CMS). Such systems provide a high degree of flexibility to manufacturing operations, but the benefits they promise cannot be fully achieved until all the manufacturing functions are integrated into the design of the system. This subject has drawn a great deal of attention from the research community (e.g., Nadoli and Rangaswamy, 1993; Rembold and Tanchoco, 1994; Noble et al., 1998). As a key component of manufacturing systems, MH predominantly interacts with the facility layout and system control/scheduling problems. The material handling system (MHS) design problem as a whole requires that the logical and physical aspects of material flow be combined by means of MH equipment and that the design be justified from both performance and economic perspectives. Since MHS is an integrating component of a manufacturing system, all complexity inherent in the manufacturing operations is transferred to the MHS. Associated with the MHS design problem is the complexity of the economic justification process. The design is of no value if it is economically infeasible. Therefore, the MHS design problem must include economic considerations. However, much of the recent research relegates the economics of the design to a secondary issue that is evaluative in nature (Gupta and Dutta, 1994). This work represents the second step in an attempt at integrating the MHS design into the overall design of a CMS, which centers around the selection of machines and the allocation of operations to the machines. The current work takes into account the various MH operations that take place during manufacturing, both at the processing machines and in-between. It attempts to determine a set of MH equipment compatible with the required MH operations and the characteristics of the part types. It is an attempt at integrating the operation allocation (OA) problem and the material handling systems selection (MHSS) problem as first proposed by Paulo (2002) and Paulo et al. (2002). Section 2 presents a literature review of some of the relevant work published in recent years that deal with the OA and the MHSS problems. In Section 3 the OA and MHSS models are developed and an algorithm to solve them is presented. To demonstrate the applicability of the models, a numerical example and a discussion of its solution are presented in Section 4. Finally, a discussion of the implementation of the model and some concluding remarks are presented in Section 5.

In this paper, we have developed and presented an iterative approach to solve the operation allocation and MH system selection problems in cellular manufacturing systems. The model formulations presented are useful as a planning tool to generate some of the design features of a manufacturing system. The present application of the models is limited to a small FMS or a single cell, but it may be modified to accommodate multiple cell formulation. The objectives are to select groups of machines, load those machines to manufacture a given set of part types, and select a set of compatible as well as economical MHS to handle the parts at or in-between the machines. An algorithm is presented to solve the models in three steps. Each iteration consists of solving the model P(OA), followed by solving the model P(MHSS), and then modifying the available choices of MH equipment for part–process combinations and returning to P(OA). The steps are repeated until the solutions from the two models converge. In the first step, P(OA) determines the optimal assignment of the operations of the part types to machines, and selects a set of MH equipment to transport the parts from one machine to the next. The assignments are made so as to minimize the total costs of operations, machine setup and MH (transportation). The assignments constitute the input values to P(MHSS). In the second step, P(MHSS) is solved to determine the most compatible MH equipment to perform all the MH operations–sub-operations required by the part types when visiting the machines. The MH equipments are chosen based on their ability to perform the necessary MH functions and their ability to handle the part types with certain key product characteristics. In the third step, the assignments of MH equipment, determined by P(MHSS), are made available to P(OA) which will be used as the starting point of the next iteration to find a minimum-cost OA solution. The iterations continue until a balance is achieved between the two objectives of minimizing the total costs and maximizing the compatibility index. A numerical example shows that the models can be successfully used as a tool for solving the OA and MH system selection problems. The computational time required to solve the models is fairly high. For the numerical example presented, which has more than 30,000 variables and over 3000 constraints, the solution was reached in over an hour of computer time on a PC (P-III 500 OMHz). The time will increase for larger problems. Given that these are planning models, and not operational models that require execution daily or hourly, the authors believe that the computational times are acceptable. The current methodology is a further step towards the integration of the OA and MH functions in cellular manufacturing systems. It should be pointed out that the ultimate goal of this project is to develop a single model which incorporates the OA and the MHSS problems within a unified framework. The current implementation, however, offers some flexibility in arriving at a common solution that represents a trade-off between the cost and compatibility of MH equipment with the part types.