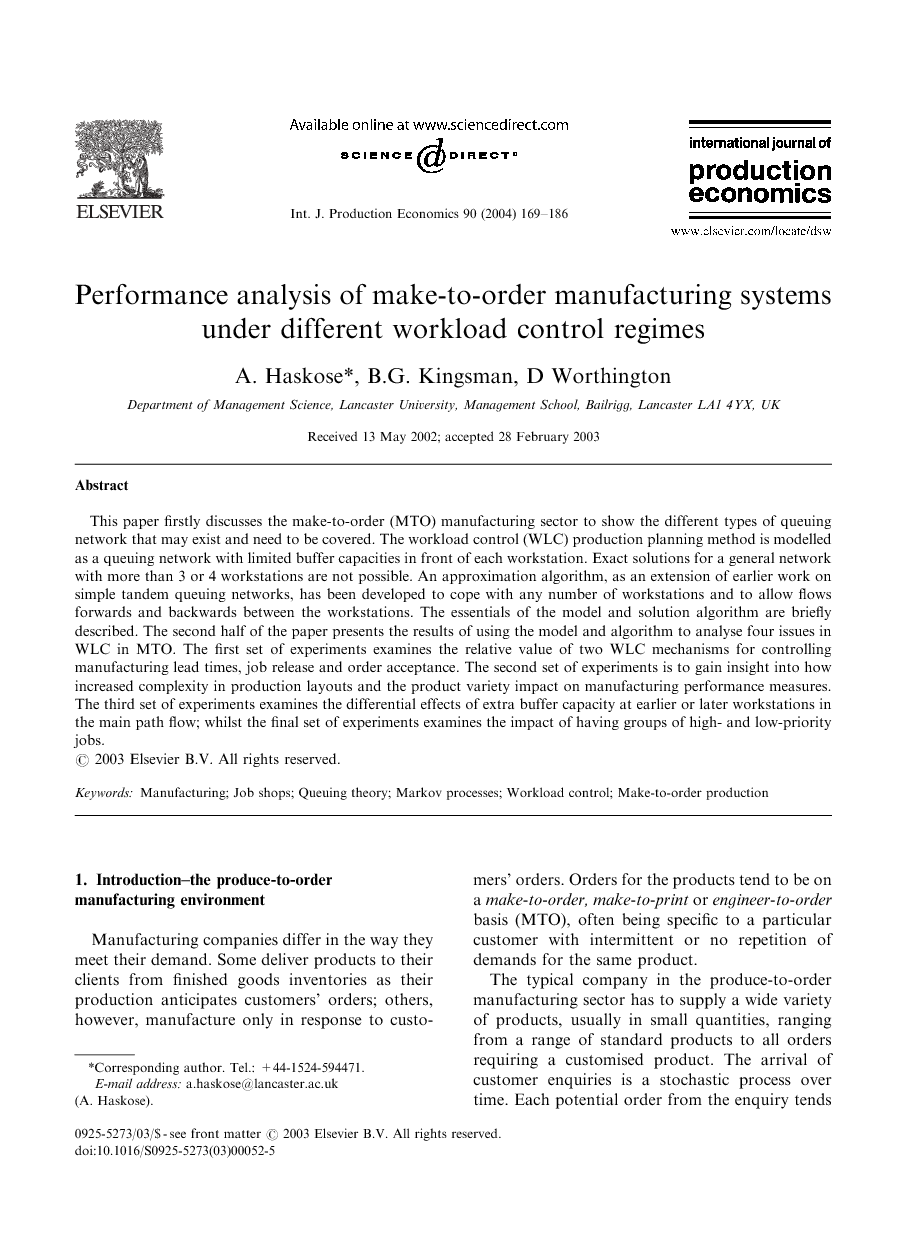 This paper firstly discusses the make-to-order (MTO) manufacturing sector to show the different types of queuing network that may exist and need to be covered. The workload control (WLC) production planning method is modelled as a queuing network with limited buffer capacities in front of each workstation. Exact solutions for a general network with more than 3 or 4 workstations are not possible. An approximation algorithm, as an extension of earlier work on simple tandem queuing networks, has been developed to cope with any number of workstations and to allow flows forwards and backwards between the workstations. The essentials of the model and solution algorithm are briefly described. The second half of the paper presents the results of using the model and algorithm to analyse four issues in WLC in MTO. The first set of experiments examines the relative value of two WLC mechanisms for controlling manufacturing lead times, job release and order acceptance. The second set of experiments is to gain insight into how increased complexity in production layouts and the product variety impact on manufacturing performance measures. The third set of experiments examines the differential effects of extra buffer capacity at earlier or later workstations in the main path flow; whilst the final set of experiments examines the impact of having groups of high- and low-priority jobs.

This paper has shown how MTO manufacturing in its widest sense can be modelled as an arbitrary queuing network with limited buffer capacities to store jobs in front of each workstation. This makes it immediately apparent that WLC ideas are an obvious way to plan and manage such operations. The paper has also briefly presented an approximation model and algorithm for finding analytically the steady-state solutions for any form of arbitrary queuing network. This means that many more alternative options and situations can be analysed in a limited time period than if one uses a simulation approach. Applications of the model have been described for four situations: • the comparative impacts of control at the order acceptance and job release stages on manufacturing lead times, work-in-process and capacity utilisation; • the impact on the performance measures of increased complexity in the production layouts and the product variety; • the relative effects of increasing the buffer capacity at later rather than earlier work stations in the main path flow; • the impact of having high- and low-priority jobs. An obvious extension to the research is to explore the differences found between the more complex job shops and the simple tandem system for larger increases in buffer sizes and increases at more than one interior workstation. Running these further experiments for the simpler job shop (ff) where jobs can only feed forward and for the more complicated job shop, fb(2), with more feedback should provide insight into how far it is the existence of feedback that suggests having larger buffers at the end stations rather than the earlier ones is better. The results presented are only specific for the particular cases studied. However, they provide insight into the general behaviour that could be expected. They demonstrate the value of the model to explore the behaviour of MTO manufacturing issues in general. It is particularly appropriate for exploring WLC issues and for estimating in advance what planning norms to use for any new situation once the desired performance objectives have been set. The results obtained in this research, albeit provisional at this stage, suggest that as the job shop layout becomes more complex, job shops behave very differently to simpler tandem systems. Clearly, the task of WLC in networks of these types is not simple, and would be better if undertaken with the aid of models capable of predicting the non-obvious consequences of management actions.