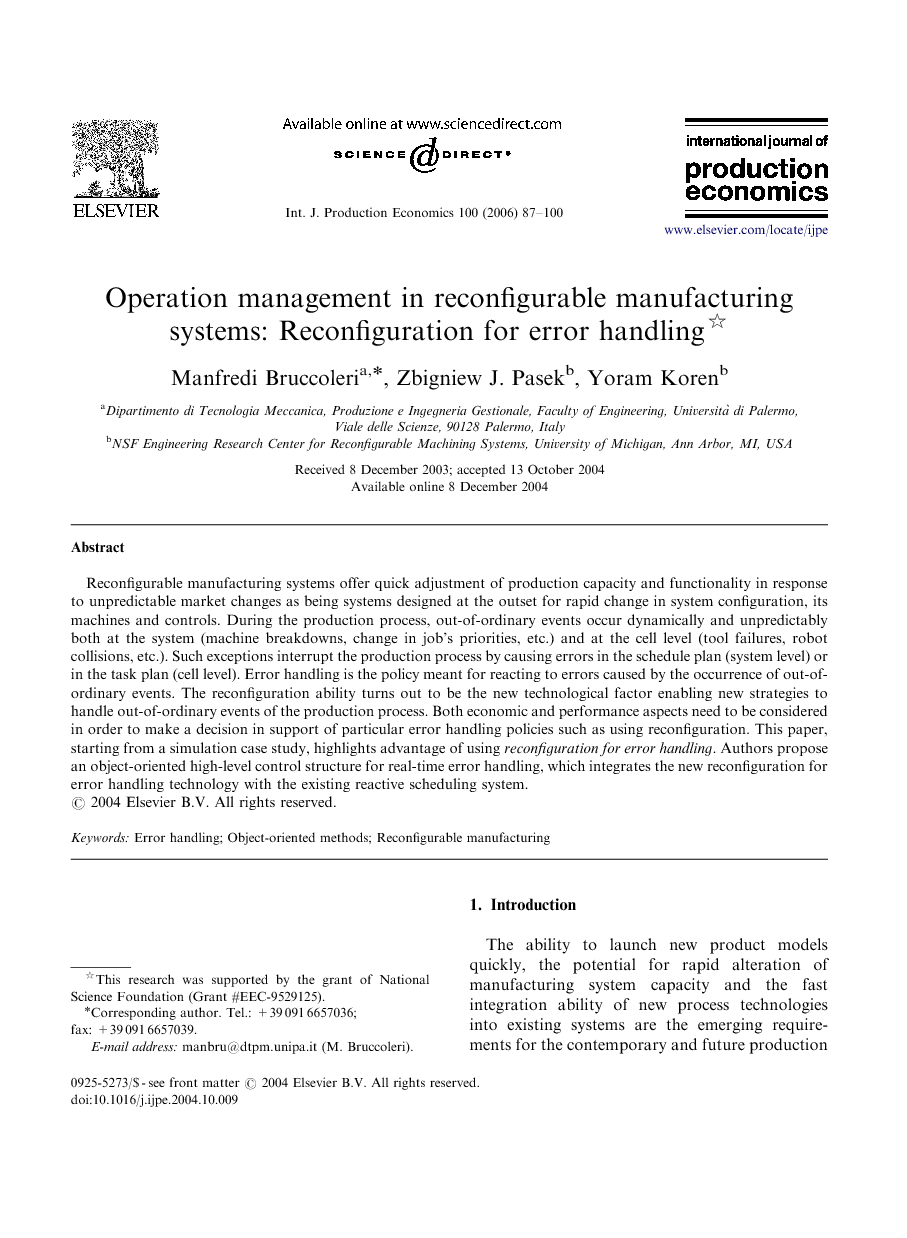 Reconfigurable manufacturing systems offer quick adjustment of production capacity and functionality in response to unpredictable market changes as being systems designed at the outset for rapid change in system configuration, its machines and controls. During the production process, out-of-ordinary events occur dynamically and unpredictably both at the system (machine breakdowns, change in job's priorities, etc.) and at the cell level (tool failures, robot collisions, etc.). Such exceptions interrupt the production process by causing errors in the schedule plan (system level) or in the task plan (cell level). Error handling is the policy meant for reacting to errors caused by the occurrence of out-of-ordinary events. The reconfiguration ability turns out to be the new technological factor enabling new strategies to handle out-of-ordinary events of the production process. Both economic and performance aspects need to be considered in order to make a decision in support of particular error handling policies such as using reconfiguration. This paper, starting from a simulation case study, highlights advantage of using reconfiguration for error handling. Authors propose an object-oriented high-level control structure for real-time error handling, which integrates the new reconfiguration for error handling technology with the existing reactive scheduling system.

The ability to launch new product models quickly, the potential for rapid alteration of manufacturing system capacity and the fast integration ability of new process technologies into existing systems are the emerging requirements for the contemporary and future production facilities. Reconfigurable manufacturing systems (RMSs) are at the moment widely considered as one of the promising key technologies to enable responsiveness in the new production era known as mass customization. It is true that the flexibility offered by flexible manufacturing systems (FMSs) certainly allows to manufacture a variety of products in the same systems, but it is not the only key to success. In order to remain competitive under unpredictable and rapid changing market conditions, flexibility must be coupled with responsiveness and cost efficiency, as well as high reliability, scalability, and ability for easy software/hardware upgrades ability (Mehrabi et al., 2000). RMSs offer such features allowing quick adjustment of production capacity and functionality by rearranging or changing its modular components. Koren et al. (1999) define RMS as a manufacturing system designed at the outset for rapid changes in structure, as well as in hardware and software components, in order to quickly adjust production capacity and functionality within a part family in response to sudden changes in market or in regulatory requirements. An RMS is basically a mix of CNC machines, dedicated machines, and reconfigurable machine tools (RMTs). RMTs are modular machines with a flexible structure that allows changes of its resources (e.g. adding a new axis), equipped with reconfigurable controllers integrated in open-architecture environment. An RMS can be easily reconfigured at a system level (e.g. changing the layout configuration), machine level (e.g. adding a new spindle), and control level (e.g. integrating a new software module) (Koren et al., 1999). An exception can be thought of as a difference between the actual and the expected state of the production system. Machine breakdowns, changes in job priorities, dynamic introduction of new jobs, order cancellations, increases in job arrival rates, changes in the mix of parts, and reworks due to quality problem, are all examples of exceptions. Exception occurrence is usually unpredictable. However, predictable events, such as planned preventive maintenance, can also be considered exceptions as they interrupt the production process. Unless some strategy to deal with the exception is implemented, the production system is forced to stop its operation whenever an exception occurs. Otherwise, damages to the system itself or errors in the product may occur. Exception handling is the policy meant for countering unwanted effects of exceptions and for recovering from errors caused by exception occurrences. As the literature review shows, a considerable effort has been made to investigate the field of exception handling for the scheduling or task planning process. Most frequently, the adopted approach to exception handling is based on strategies which are enabled by the system routing flexibility. The issue treated in this paper is, instead, to understand how the reconfigurability feature of RMSs could be also used together with the routing flexibility in the exception-handling process. This would make the RMSs surely more cost effective. In RMS, however, reactive scheduling decisions, task planning recoveries, and error handling policies are naturally more complex since the use of hardware reconfiguration in these systems for handling exceptions is secondary. In fact, the reconfiguration ability of these systems could be used in exceptional cases, as production process errors, even though it cannot be considered a source of flexibility for ordinary operations. The research presented in this paper explores such potential directions and its focus is on understanding whether the reconfiguration ability of RMSs can be used and coupled with the routing flexibility in the error handling process, further increasing its cost-effectiveness. In order to make decisions regarding reconfiguration for error handling, economic and performance considerations have to be carried out and a real-time decision support system is needed. Such system has to be coupled with the existing scheduling system (scheduler) at the system level and ultimately with the sequence controller (task planner) at the cell level. For these reasons, a modular and object-oriented (OO) architecture is needed for operation management issues such as error handling in RMS (Bruccoleri et al., 2003b). The proposed reconfiguration for error handling at the system level is addressed in Section 2, while Section 3 addresses the same problem at the cell level by providing a literature review on error recovery strategies in robotized cells, stating the explored problem, analyzing the error handling issue in a manufacturing transfer line case study. The proposed control model is shown in Section 4. Conclusions and further developments are reported in Section 5.

The work presented in this paper investigated operation management issues related to reconfigurable manufacturing systems. Specifically, motivated by the results obtained by using reconfiguration for error handling in scheduling systems, the aim here was to explore the same policy at a cell level. Specifically, it was meant to explore potential of a new operation management approach for handling out-of-ordinary events. This approach is based on the reconfiguration feature of RMSs. Although reconfiguration cannot be considered as a flexibility feature in terms of ordinary scheduling operations, it can be used instead as a routing flexibility enabling technology in exceptional cases, as production process errors, such as machine breakdowns, unexpected job arrivals or canceling, tool breakages, robot collisions, sensor damages, and so forth. Decisions concerning this problem are very complex, as it involves many variables such as the reconfiguration time, the cost associated with reconfiguration, the cost associated with the delay, the time for repairing the machine, the machine availability, the number of tasks in the canceled order, and so forth. From a deep literature analysis, the problem that surfaced was how to deal with a machine breakdown in a reconfigurable system that does not allow any routing flexibility. In this case, error handling essentially matches with making the decision about if and how a reconfigurable machine should be reconfigured to make the system able to perform those operations that cannot be temporarily performed due to the occurrence of the breakdown of another, associated machine. The complexity of such a decision-making process depends mostly on both performance and economic concerns involved in the problem. An imaginary manufacturing environment has been presented in order to draw attention to the complexity of the above-mentioned decision process. However and mainly, it represents a simple example of how advantages can be achieved by using reconfiguration to handle machine breakdowns. Also, it emphasizes how these advantages are achieved only under particular system constructive characteristics and under specific economic assumptions. The authors proposed a high-level object-oriented control architecture for error handling aided by reconfiguration and presented it by using the unified modeling language notation. It relies on the new idea of using reconfiguration for error handling and integrates it with the existing scheduling or task planning system.