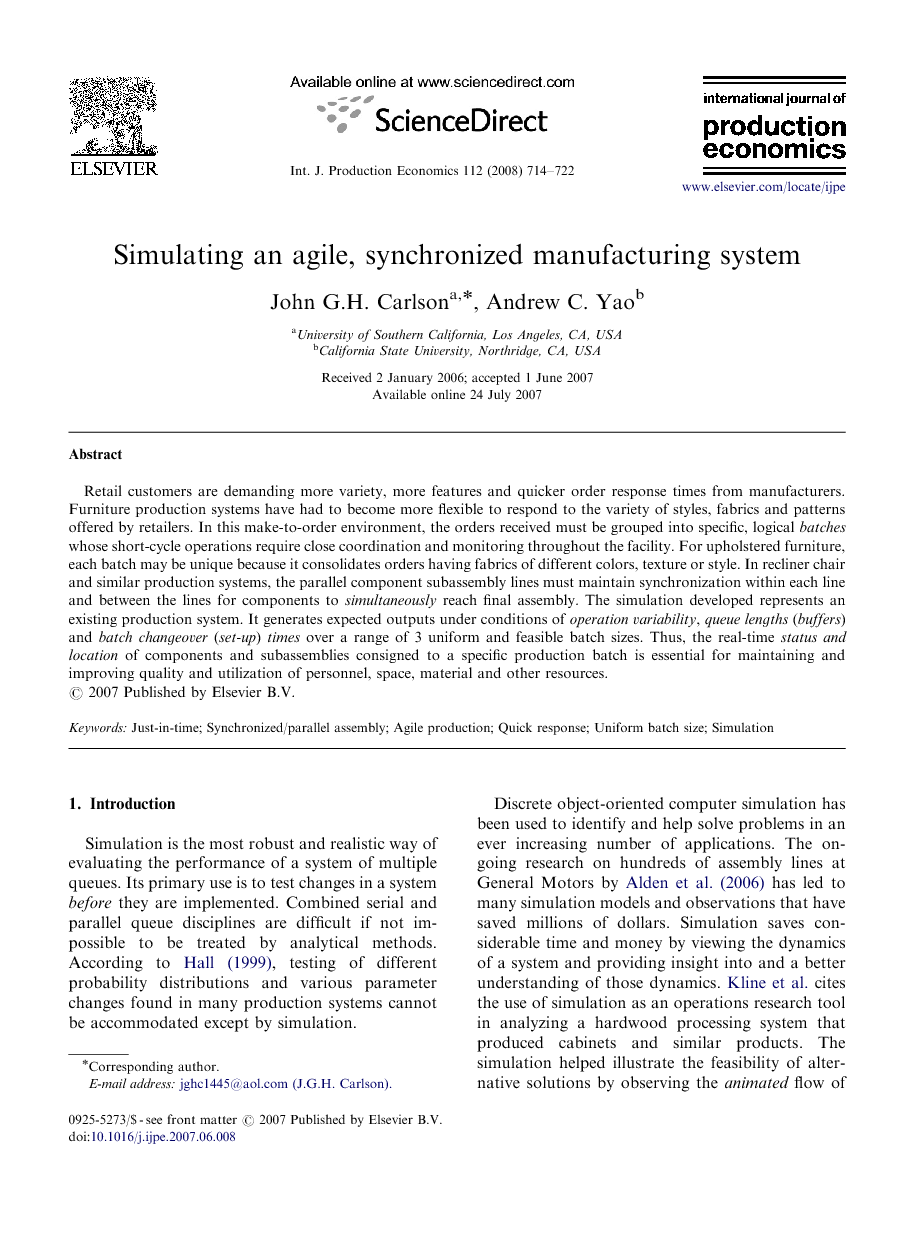 Retail customers are demanding more variety, more features and quicker order response times from manufacturers. Furniture production systems have had to become more flexible to respond to the variety of styles, fabrics and patterns offered by retailers. In this make-to-order environment, the orders received must be grouped into specific, logical batches whose short-cycle operations require close coordination and monitoring throughout the facility. For upholstered furniture, each batch may be unique because it consolidates orders having fabrics of different colors, texture or style. In recliner chair and similar production systems, the parallel component subassembly lines must maintain synchronization within each line and between the lines for components to simultaneously reach final assembly. The simulation developed represents an existing production system. It generates expected outputs under conditions of operation variability, queue lengths (buffers) and batch changeover (set-up) times over a range of 3 uniform and feasible batch sizes. Thus, the real-time status and location of components and subassemblies consigned to a specific production batch is essential for maintaining and improving quality and utilization of personnel, space, material and other resources.

Simulation is the most robust and realistic way of evaluating the performance of a system of multiple queues. Its primary use is to test changes in a system before they are implemented. Combined serial and parallel queue disciplines are difficult if not impossible to be treated by analytical methods. According to Hall (1999), testing of different probability distributions and various parameter changes found in many production systems cannot be accommodated except by simulation. Discrete object-oriented computer simulation has been used to identify and help solve problems in an ever increasing number of applications. The ongoing research on hundreds of assembly lines at General Motors by Alden et al. (2006) has led to many simulation models and observations that have saved millions of dollars. Simulation saves considerable time and money by viewing the dynamics of a system and providing insight into and a better understanding of those dynamics. Kline et al. cites the use of simulation as an operations research tool in analyzing a hardwood processing system that produced cabinets and similar products. The simulation helped illustrate the feasibility of alternative solutions by observing the animated flow of products through the processes. Simulation can also offer genuine excitement by pre-testing ideas and introducing realistic “what-if” changes in the parameters. As Keller et al. (1991) and Spedding and Sun (1999) concluded, simulation can also be useful in enhancing a cost accounting system by evaluating manpower, space and equipment requirements. Enormous amounts of money continue to be spent by companies and industries to improve small-lot production. McRainey (1977) observed, as have others, that manufacturers are constantly being challenged by the demands of the distribution systems for quick response and just-in-time (JIT) requirements of customers. Manufacturers and certainly their marketing personnel, seek small-lot production with processes changed over quickly from one product to another to better serve customers. However, as Katayama and Bennett (1999) conclude per the classical economic models, i.e. EOQ/EMQ, an emphasis on agility must simultaneously focus on changeover costs when producing in smaller lots. Whitehead (2000) restates an underlying principle from the JIT concept that agile, small-lot systems can exist in concert with lean manufacturing systems. Both focus on reducing waste through lower inventory investment, space savings, better material handling, and reduced changeover and processing times. Thus small-lot sizes are fundamental to flexible JIT systems and enhance superior customer service. The simulation study from Baykoc and Erol (1998) examined the performance of a multi-item, multi-line, multi-stage JIT system and demonstrated how the systems react under different circumstances. The variability of processing time and arrival demands of subsequent operations were studied. Sianesi (1998) demonstrated that the flexibility inherent in JIT production applied to “mixed-model” systems reduces WIP inventories in make-to-order environments. The system described in this study is more complex in that the subassemblies are produced on separate but parallel lines and linked to a specific mixed-product batch. Also the operations must be synchronized within a relatively narrow time interval. Delays of any component batches may cause all production to slow or stop. The time for a unit or batch in the system will depend on the maximum of the various operation and waiting times and not just on their sum. This leads to more complicated queue disciplines. It is a requirement to finish each of the dependent operations at the same time. There is little value by completing an operation or a batch early only to wait for other parallel operations to be completed. In fact, it may be disruptive and wasteful of costly resources of space, personnel and equipment. Simulation models do require empirical data, yet reasonable estimates or sample data are helpful in identifying the empirical data needed. In the system studied, estimates were used to help develop the simulation model and generate results approximating an existing production system. Stopwatch studies or video tape gathering of real-time data may discover other variables for which the simulation model does not accommodate. On the other hand, the model verifies the fundamental logic employed in managing the system and points towards areas where constant improvement, the company credo, can enhance profitability. Large lots may appear more economical but smaller lots or batch sizes leads to less waste of space, inventory investment and better customer service. Statistical analysis of empirical data may add refinement to the results but being able to manipulate the model and ask “what-ifs” appears to offer more of a contribution to understanding a complex system. To represent an actual, interactively constrained production system by a discrete event, animated model is a challenge. The ability of a simulation to visually represent the flow, delays and projected throughput helps understand some of the requirements for maintaining, controlling, improving and managing a fairly complex JIT system. The simulation model designed makes a number of realistic assumptions in order for production to respond to the need for small-batch production. The simulation objective: • To discover the effect on throughputs for selected standard batch quantities as a function of operation time variability, batch changeover times and WIP buffers.

The graphs and data demonstrate that further reduction in batch size would reduce production output. Reducing the queue size from 2 to 1 buffer (batch) would have a very small impact on output. However, synchronized output from an interactive set of manually controlled assembly line operations demands a buffered system. Less operation time variability and less changeover time between batches would increase output as would be expected. Without cost data such as cost of space, alternative material handing methods and estimated cost benefits of shorter delivery cycles, an economic model on the order of EMQ (economic manufacturing quantity) would not contribute to understanding the real system. The synchronization required between parallel subassembly lines can be extreme in the sense that if one subassembly line became a bottleneck at any of its operations, all the other assembly lines would be affected. If this requirement is relaxed such that synchronization is necessary only at the last of the subassembly operations, as in the simulation model presented, throughput will increase. However, synchronization at each interim stage offers better control of quality and suggests opportunities for product improvements and improved production methods. It can help avoid delays and can anticipate problems. In the production system described, the tradeoffs are between small-lot flexibility to better serve customers plus closer control of quality and production methods versus economies-of-scale such as cutting larger batch quantities and less lost time from fewer changeovers and less material handling. Smaller batch sizes and resulting larger variability would make the system much more sensitive to disruptions. With smaller batches also, troubles may be detected earlier and fewer batches would be impacted until problems are resolved. The production system described is comparable to other JIT (just-in-time) systems used so successfully in the automotive and other industries. There are instances in JIT systems that the best lot quantity is found by trial and error and dependent on what the system could tolerate in terms of changeover delays, processing times, buffers and material handling. A simulation model that accurately represents a real system and is quick and easy to use can avoid expensive and distracting experimentation on the production floor. Simulation helps understand the real system and allow users to explore alternatives. The simulation in this case helped understand the impact of batch size and variability on system performance. It also demonstrated the importance of buffers to protect system performance. The batch size is the key to an integrated, flexible, synchronized parallel customer-oriented assembly system. Small batches can better accommodate changes in schedules, changes in methods, changes in materials handling and changes in product configuration. A cost-effective production schedule is contingent on consolidating customer orders into batches that also recognize the distribution system. Small batches can reduce delivery time, thereby improving sales. Retailers and customers have become less tolerant of long delivery times, delays or postponements. In furniture production, synchronizing all activities with the cutting operation, maintaining complete on-line visibility of the factory floor plus giving immediate attention to problems has become a requirement. Long-term and short-term system balancing requires constant review of the facilities, methods, technologies, and education in JIT and quality management principles and techniques. A real-time visual monitoring system may be helpful to digest the comprehensive data generated in real time. Further studies into production systems represented by this simulation can be entertained. The economic and behavioral impact of reduction in the lot sizes could include studies of within-lot learning, applicable communication technologies, etc. Mixed model production algorithms could be expanded to assist in the dynamic decision-making of batch constituents in complex batch-oriented, labor-intensive, market-oriented environments depicted by this simulation.