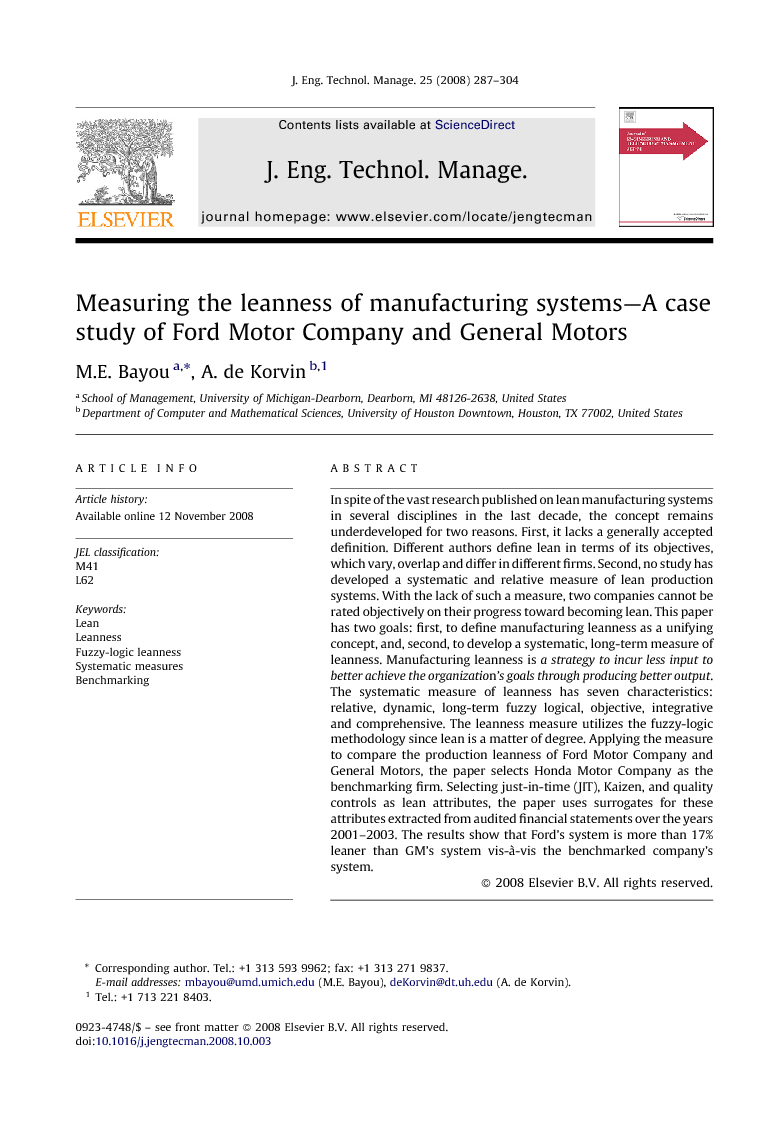 In spite of the vast research published on lean manufacturing systems in several disciplines in the last decade, the concept remains underdeveloped for two reasons. First, it lacks a generally accepted definition. Different authors define lean in terms of its objectives, which vary, overlap and differ in different firms. Second, no study has developed a systematic and relative measure of lean production systems. With the lack of such a measure, two companies cannot be rated objectively on their progress toward becoming lean. This paper has two goals: first, to define manufacturing leanness as a unifying concept, and, second, to develop a systematic, long-term measure of leanness. Manufacturing leanness is a strategy to incur less input to better achieve the organization’s goals through producing better output. The systematic measure of leanness has seven characteristics: relative, dynamic, long-term fuzzy logical, objective, integrative and comprehensive. The leanness measure utilizes the fuzzy-logic methodology since lean is a matter of degree. Applying the measure to compare the production leanness of Ford Motor Company and General Motors, the paper selects Honda Motor Company as the benchmarking firm. Selecting just-in-time (JIT), Kaizen, and quality controls as lean attributes, the paper uses surrogates for these attributes extracted from audited financial statements over the years 2001–2003. The results show that Ford’s system is more than 17% leaner than GM’s system vis-à-vis the benchmarked company’s system.

For decades, manufacturers have sought to optimize operations, supply chains and capital assets (Pagatheodrou, 2005, p. 13). Facilitated by advances in information technology, the pursuit of optimization has intensified the demand for speed, flexibility, waste elimination, process control, people utilization and global reach to gain competitive advantages (James-Moore and Gibbons, 1997, Allway and Corbett, 2002 and Pagatheodrou, 2005). Recently, achieving this goal has become increasingly complex due to the fast moving global market, budget cuts and capacity down sizing (Pagatheodrou, 2005, p. 12). Hence, lean manufacturing2 has become the key approach to managing this complexity (Liker, 1998). The Toyota Production System (TPS), the pioneering approach to manufacturing leanness, has become the basis for much of the optimization movement that has dominated manufacturing developments since the last decade (Liker, 1998 and Hall, 2004). In spite of the vast research published on lean manufacturing, the concept of leanness is underdeveloped for two reasons: (a) it is often loosely defined in terms of its objectives, and (b) it lacks a holistic, unifying measure. The objectives vary, overlap and differ in their emphasis in different firms, e.g., on lean production versus lean behavior (Emiliani, 2000). Several studies have defined a portfolio of tools or techniques to implement lean manufacturing (Rother, 1998, Hines and Taylor, 2000, Emiliani, 2000 and Sullivan et al., 2002). These studies, however, fall short of developing a systematic measure of manufacturing leanness. For example, these studies lack the mechanism by which they can determine whether Ford Motor Company’s production system is leaner than General Motors’s production system, and by how much. Manufacturing leanness is a concept that unifies the various practices of promoting lean. Since these practices measure different objects, e.g., inventory size, quality defects, Kaizen and asset reduction (Emiliani, 2000), management needs a unifying measure of the effects of these practices, a measure that meaningfully integrates the changes in these practices into one indicator, a scalar. Accordingly, using this leanness scalar, two competing companies could be compared to determine the relative degrees of their manufacturing leanness. A systematic measure of this sort can help management and other stakeholders (a) simplify the task of lean assessment by collapsing the effect of several associative practices that seek waste reduction and output improvement, (b) identify and analyze the effect of cost cutting programs, (c) add a strategic long-term evaluative tool to the short-term financial indicators for the assessment of corporate performance. The proposed measure of manufacturing leanness in this paper can help achieve these benefits since it formulates leanness as (1) a fuzzy concept because leanness is a matter of degree, e.g., a firm can become slightly lean, moderately lean or highly lean, (2) relative across time for the same entity, (3) relative across firms in an industry, (4) integrative of the multitude of different practices used to achieve leanness, (5) comprehensive by associating resources used in production to the organization goals, (6) long-term for studying the lean effect over a number of years and (7) objective since it uses audited data. The research problem of this paper is succinctly stated as follows: developing and applying a systematic measure of manufacturing leanness. The balance of the paper is organized as follows. The second section defines and explains the basic concept of leanness. The third section describes the algorithm of developing the leanness measure. The fourth section describes the variables, data and the required computations for measuring manufacturing leanness of American automakers versus their Japanese counterparts. The limitations of the study and suggestions for future research are presented in the fifth section. Finally, a summary and conclusions are presented in the last section.

The burgeoning research studies on lean production system have emphasized that the Toyota production system approach to lean is the key to growth and survival amid the increasing global competition, fast changes in manufacturing and service logistics and economic recessions. However, these studies fall short of delivering a systematic measure of leanness by which companies can be compared across time and with each others regarding the degree of leanness of their production systems. In addition, the concept of leanness is underdeveloped because many studies define lean in terms of its objectives, which vary, overlap and differ among firms and among researchers. This paper defines leanness as a dynamic, relative and long-term concept. Accordingly, it develops a relative measure of lean, which has the following characteristics: relative, dynamic, long-term, integrative, holistic and objective. Using a fuzzy-logic methodology, this case study lists the steps of an algorithm and applies it to the automobile industry. The measure compares the production systems of Ford Motor Company and General Motors using Honda Motor Company’s system as a benchmark over the years 2001–2003, using their audited consolidated financial statements and other pertinent information reported in the SEC Form 10-K for Ford and GM and Form 6-K for Honda. The results of analyzing several propositions over the period 2001–2003 show that on a scale from 0.0 to 1.0, the production systems of Ford and GM are 0.197 and 0.230, respectively, as compared to Honda’s system, which is set at 0.000 as the frame of reference. Therefore, our belief that Ford’s system is leaner than GM’s system is supported by 0.46[0.197/(0.197 + 0.230)]. The results also indicate that Ford’s system is more than 17% leaner than GM’s system over the 3-year period.