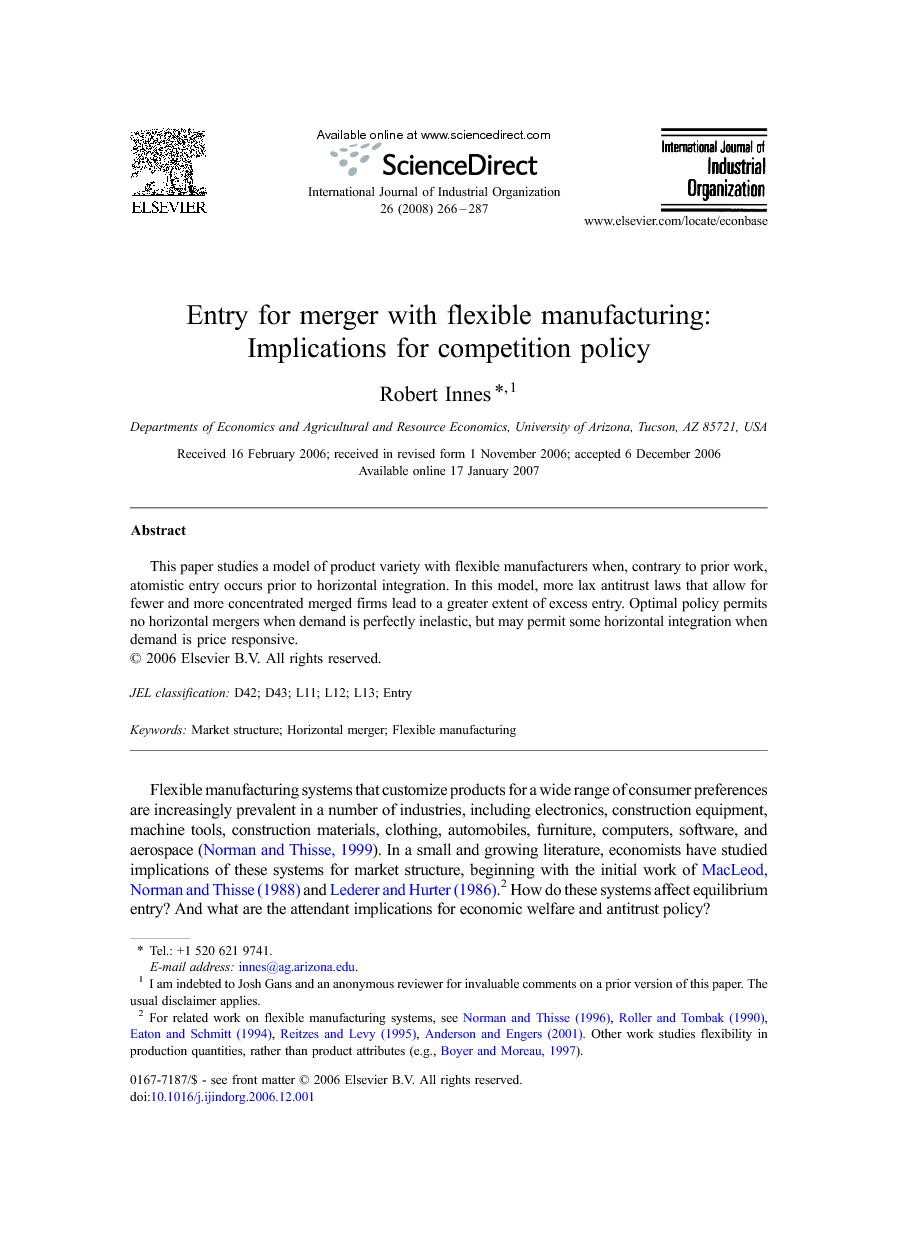 This paper studies a model of product variety with flexible manufacturers when, contrary to prior work, atomistic entry occurs prior to horizontal integration. In this model, more lax antitrust laws that allow for fewer and more concentrated merged firms lead to a greater extent of excess entry. Optimal policy permits no horizontal mergers when demand is perfectly inelastic, but may permit some horizontal integration when demand is price responsive.

Spatial models of product variety often imply that free entry produces excess entry and that market concentration, by reducing entry, can yield efficiency dividends (Lancaster, 1990 and Salop, 1979). In the context of a spatial model of flexible production, this paper explores the robustness of such conclusions to an entry process in which concentration occurs by merger, after product proliferation by atomistic entrants. The main message imparted by this alternative model of entry is very simple: Because more concentrated markets are more profitable, and because prospective entrants can anticipate obtaining a share of profits from post-entry mergers, concentration tends to spur more entry, not less. Hence, the problem of excess entry is exacerbated, not mitigated, by allowing more market concentration. As noted in the Introduction, food markets fit the description for flexible production quite well. Beyond heuristic evidence that new food products are predominantly launched by small (atomistic) firms – as accords with our model of entry-for-merger – there is also empirical evidence that the positive predictions of this model are borne out in these markets. Specifically, recent work by Roder et al. (2000) and Bhattacharya and Innes (2006) documents that higher levels of market concentration are associated with significantly higher numbers of new food product introductions.27 This paper also identifies a more subtle implication of entry-for-merger games. Despite the adverse entry promotion and price-raising effects of mergers, some horizontal integration can increase economic welfare when demands are price responsive. The reason is that there are price-cutting effects of integrated firms' product location choices. Hence, to the extent that it applies in practice, our model argues against an antitrust policy that allows for substantial monopolization of a market, but may also argue for some horizontal concentration, despite an absence of scale economies in production. Of course, as with any model, we have made a number of stylizations to develop our argument, focusing (for example) on flexible technologies with identical producers, uniformily distributed consumers, and atomistic entrants. It is likely, however, that our qualitative conclusions are robust to a variety of generalizations, some of which we discuss in Section 4 above. For example, allowing for a non-uniform distribution of consumers will affect the spatial distribution of stores, with outlets more concentrated in locations of high demand. Nevertheless, for exactly the same reasons as in our simpler model, competition is still likely to spur excess entry. And mergers of contiguous outlets are still likely to worsen the extent of excess entry by rewarding each entrant with a share of gains to merger.