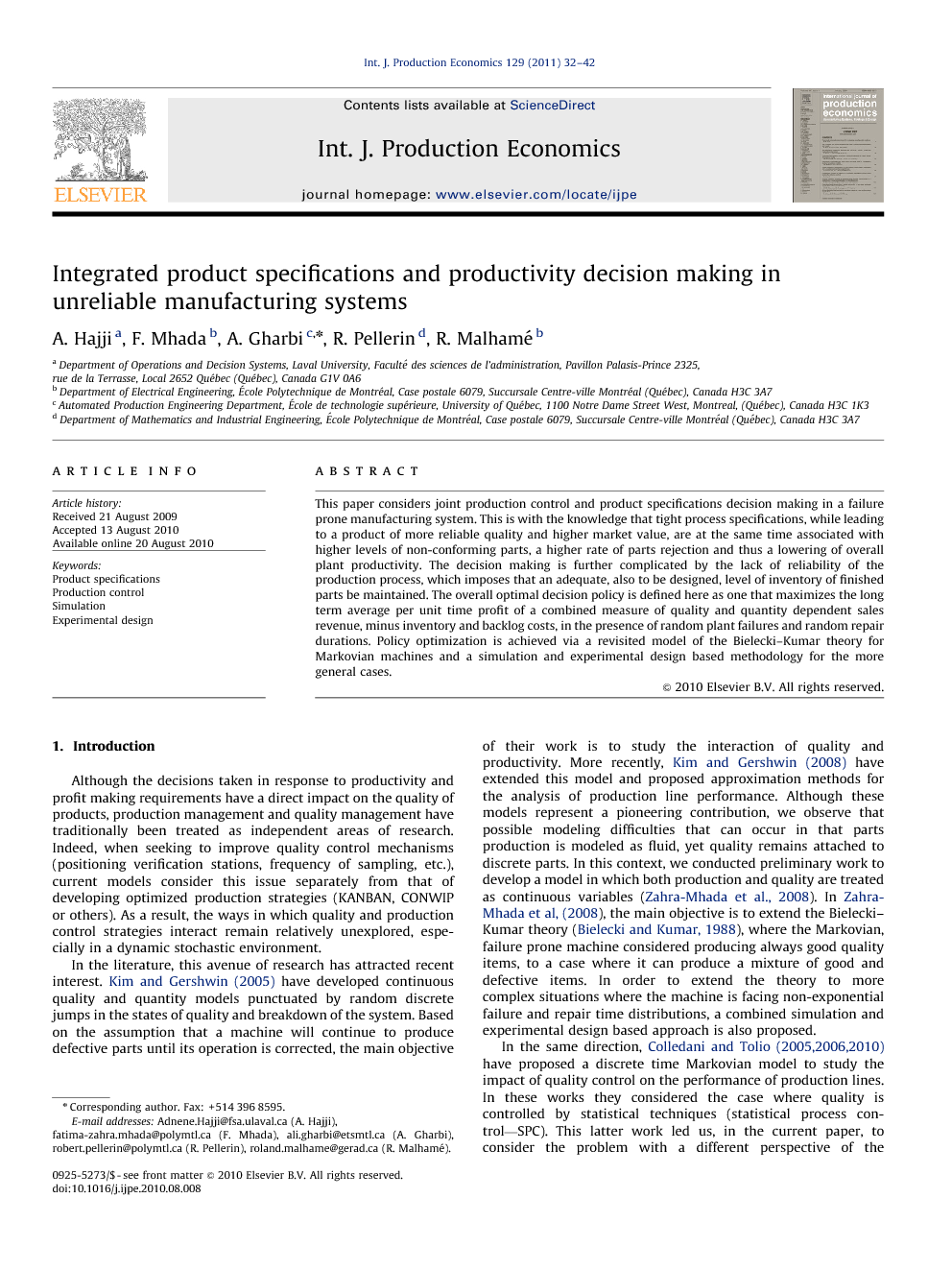 This paper considers joint production control and product specifications decision making in a failure prone manufacturing system. This is with the knowledge that tight process specifications, while leading to a product of more reliable quality and higher market value, are at the same time associated with higher levels of non-conforming parts, a higher rate of parts rejection and thus a lowering of overall plant productivity. The decision making is further complicated by the lack of reliability of the production process, which imposes that an adequate, also to be designed, level of inventory of finished parts be maintained. The overall optimal decision policy is defined here as one that maximizes the long term average per unit time profit of a combined measure of quality and quantity dependent sales revenue, minus inventory and backlog costs, in the presence of random plant failures and random repair durations. Policy optimization is achieved via a revisited model of the Bielecki–Kumar theory for Markovian machines and a simulation and experimental design based methodology for the more general cases.

Although the decisions taken in response to productivity and profit making requirements have a direct impact on the quality of products, production management and quality management have traditionally been treated as independent areas of research. Indeed, when seeking to improve quality control mechanisms (positioning verification stations, frequency of sampling, etc.), current models consider this issue separately from that of developing optimized production strategies (KANBAN, CONWIP or others). As a result, the ways in which quality and production control strategies interact remain relatively unexplored, especially in a dynamic stochastic environment. In the literature, this avenue of research has attracted recent interest. Kim and Gershwin (2005) have developed continuous quality and quantity models punctuated by random discrete jumps in the states of quality and breakdown of the system. Based on the assumption that a machine will continue to produce defective parts until its operation is corrected, the main objective of their work is to study the interaction of quality and productivity. More recently, Kim and Gershwin (2008) have extended this model and proposed approximation methods for the analysis of production line performance. Although these models represent a pioneering contribution, we observe that possible modeling difficulties that can occur in that parts production is modeled as fluid, yet quality remains attached to discrete parts. In this context, we conducted preliminary work to develop a model in which both production and quality are treated as continuous variables (Zahra-Mhada et al., 2008). In Zahra-Mhada et al, (2008), the main objective is to extend the Bielecki–Kumar theory (Bielecki and Kumar, 1988), where the Markovian, failure prone machine considered producing always good quality items, to a case where it can produce a mixture of good and defective items. In order to extend the theory to more complex situations where the machine is facing non-exponential failure and repair time distributions, a combined simulation and experimental design based approach is also proposed. In the same direction, Colledani and Tolio, 2005, Colledani and Tolio, 2006 and Colledani and Tolio, 2010 have proposed a discrete time Markovian model to study the impact of quality control on the performance of production lines. In these works they considered the case where quality is controlled by statistical techniques (statistical process control—SPC). This latter work led us, in the current paper, to consider the problem with a different perspective of the interdependence of production and finished products’ quality governed by the product specification limits after a 100% fully reliable inspection plan. Hence, an unreliable system producing a mixture of good and defective items, where the design of the product specifications and the production control strategies involving an economic decision making process is considered. In the literature many works have addressed the issue of optimizing the design of product specifications in a quality decision making process. The reader is referred to Kapur and Cho (1994), Phillips and Cho (1998) and Pan and Pan (2009) for more details on this issue. It is important also to note that several other researchers have studied the interaction between manufacturing activities (production & maintenance) and quality decision making; however it was only in a deterministic context. Integrated models were proposed and the benefits of such an approach were established. In particular, the reader is referred to Ben Daya and Rahim (2000) and Ben Daya (2002). In the context of a failure prone manufacturing system, our objective here is to find an “optimal” combined product specification limits, and production control strategy within a (parameterized) class of policies combining the hedging inventory level parameter of the Bielecki–Kumar theory (Bielecki and Kumar, 1988), and the engineering Lower and Upper specification limits of the product. Optimality is defined here as a long term average per unit time measure of quality and quantity dependent revenue from sales, minus inventory and backlog costs. A comparative study is carried out to assess the benefits of the proposed integrated decision making process versus a more traditional disjoint product design specifications and production control strategy design process. Following the lead of Gharbi and Kenne (2000) in the combined use of control theoretic analysis for candidate decision rules parameterization and simulation-based experimental design approaches for parameter optimization of production in manufacturing systems, we apply a similar hybrid methodology for the study of the joint product specification and production control for non-exponentially distributed machine failure and repair times. As a first step, a running net profit function is constructed relating current per unit time sales minus current finished parts stock/backlog per unit time costs to the parameters of the selected production and product design strategies acting as control factors. For each configuration of input factor values, a simulation model is used to determine the corresponding output, more specifically, the long term average system profit. An input–output data set is then generated through the simulation model. The experimental design is used to determine significant factors and/or their interactions, and the response surface methodology is applied to the input–output data obtained in order to estimate, first, an approximation of the objective function and, second, the related optimum. Details on the combination of analytical approaches and simulation-based statistical methods can be found in Gharbi and Kenne (2000) and in the references they provide. The reminder of the paper is organized as follows. Section 2 presents the statement of the problem. Section 3 presents the case study considered and an analytical solution for the basic cases governed by exponential distributions. The simulation-based experimental design methodology proposed for the more general cases is developed in Section 4. We present associated numerical results in Section 5. A comparative study between the integrated (production and product design) versus dissociated (production or product design) control strategies is detailed in Section 6. Section 7 contains concluding remarks.

In this paper we studied the joint production control and economic product design in a failure prone manufacturing system. More specifically, we have jointly considered, in a dynamic stochastic context, the engineering vision in terms of product specification and the production vision in terms of quality and production control. To determine the parameters of the best control policy within the class of hedging control policies, an analytical approach valid for exponential machines was first developed; it produces new insights concerning the dependence between the optimal hedging point on the rate β of non-conforming parts (see Fig. 5). The analytical approach was then contrasted with an experimental approach based on simulation modeling, design of experiment and response surface methodology. For a particular illustrative case study, we were able to show that the profit under a joint production–quality and product design strategy could increase up to 5% relative to that resulting from completely dissociated decision making strategies. It is interesting to note that the simulation based approach offers a versatile procedure to control manufacturing systems at the operational level as it is capable of handling more general non-exponential machines than allowed by the analytical method. Furthermore, its application can be significantly enhanced, thanks to an adequate initialization in the design parameter space as obtained from the analysis based on exponential machine failure and repair assumptions. More complex production and inspection architectures will be considered in the future.