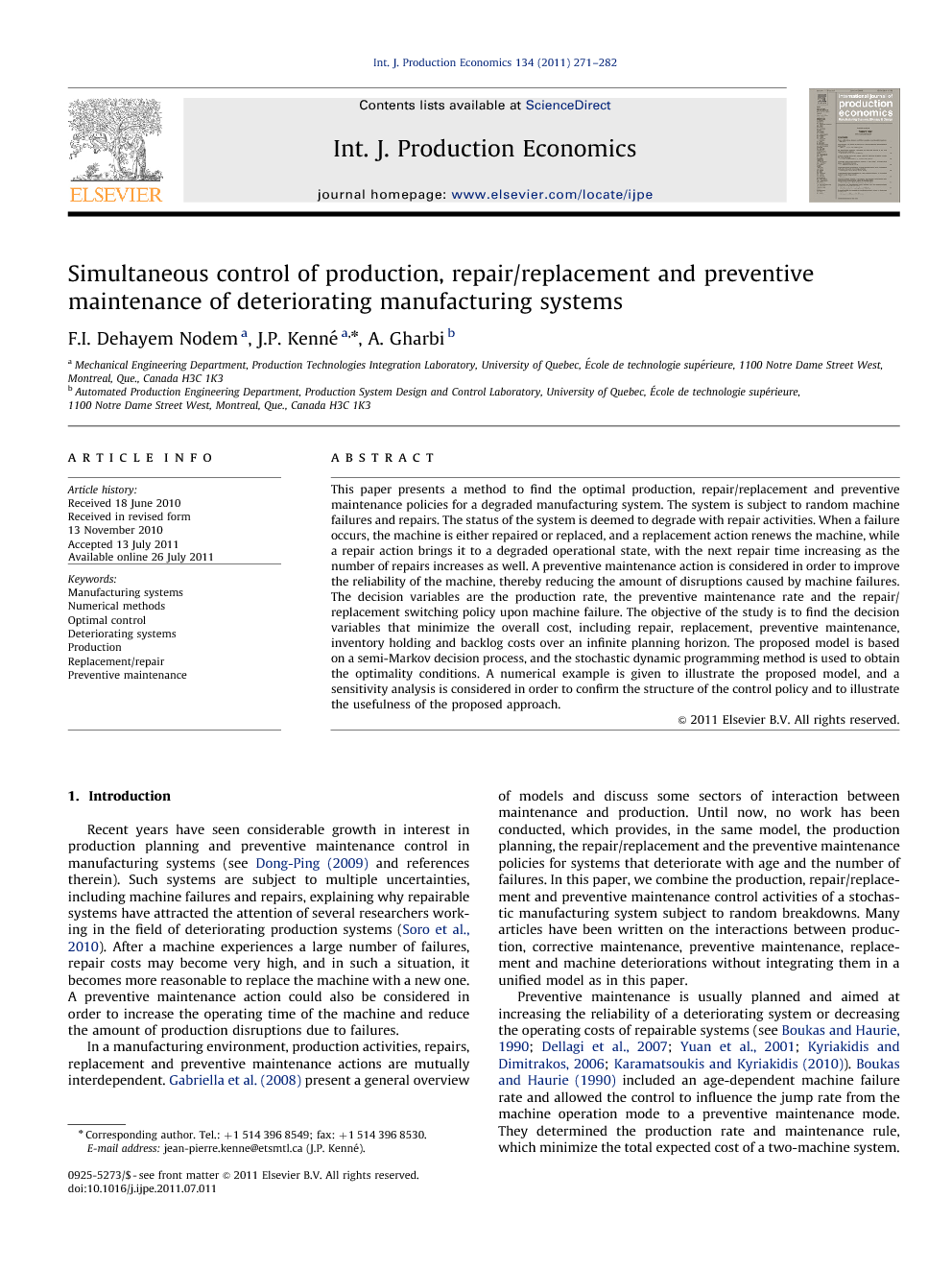 This paper presents a method to find the optimal production, repair/replacement and preventive maintenance policies for a degraded manufacturing system. The system is subject to random machine failures and repairs. The status of the system is deemed to degrade with repair activities. When a failure occurs, the machine is either repaired or replaced, and a replacement action renews the machine, while a repair action brings it to a degraded operational state, with the next repair time increasing as the number of repairs increases as well. A preventive maintenance action is considered in order to improve the reliability of the machine, thereby reducing the amount of disruptions caused by machine failures. The decision variables are the production rate, the preventive maintenance rate and the repair/replacement switching policy upon machine failure. The objective of the study is to find the decision variables that minimize the overall cost, including repair, replacement, preventive maintenance, inventory holding and backlog costs over an infinite planning horizon. The proposed model is based on a semi-Markov decision process, and the stochastic dynamic programming method is used to obtain the optimality conditions. A numerical example is given to illustrate the proposed model, and a sensitivity analysis is considered in order to confirm the structure of the control policy and to illustrate the usefulness of the proposed approach.

This paper examined a production, repair/replacement and preventive maintenance planning problem in manufacturing systems. The objective of the study was to determine how to produce while the machine is in operation, when to replace versus repair the machine if a failure occurs, and when to perform a preventive maintenance, if any, in order to minimize the overall incurred cost. Our formulation included machine mode and control dependent jump rates, and allowed us to present the increasing probability of failures due to machine aging and increasing repair time resulting from imperfect repair activities. We used reset functions, which permit repair and preventive maintenance activities aimed at restoring the machine’s age, and replacement, which provides a new machine. Thus, we extended the repair and replacement switching age control model to the case where production and preventive maintenance rates are controlled. Due to the fact that the repair activities of the machine depend on the repair history, we proposed the use of a semi-Markov decision process to determine optimal policies. We provided a numerical example, and through a couple of sensitivity analyses, we showed that the structure of the results obtained is maintained. The study presented in this paper is limited to small system consisting of one machine producing one part type. For a more complex manufacturing system consisting of m machines, producing k different part types, the control policy depends on 6×m×k parameters. The solution of HJB equations (as in Eq. (B.1)) is almost impossible for large m and k since the dimension of the numerical scheme to be implemented increases exponentially with the complexity of the system. For the aforementioned problem (i.e., for large m and k), a combination of the control theory (hierarchical approach) and the simulation-based experimental design, as in Gharbi and Kenné (2003), can be used to obtain a near optimal control policy, and this could result in the possible development of a more general model in production planning, which includes capacity limits, multi-product management and uncertainties on product demands.