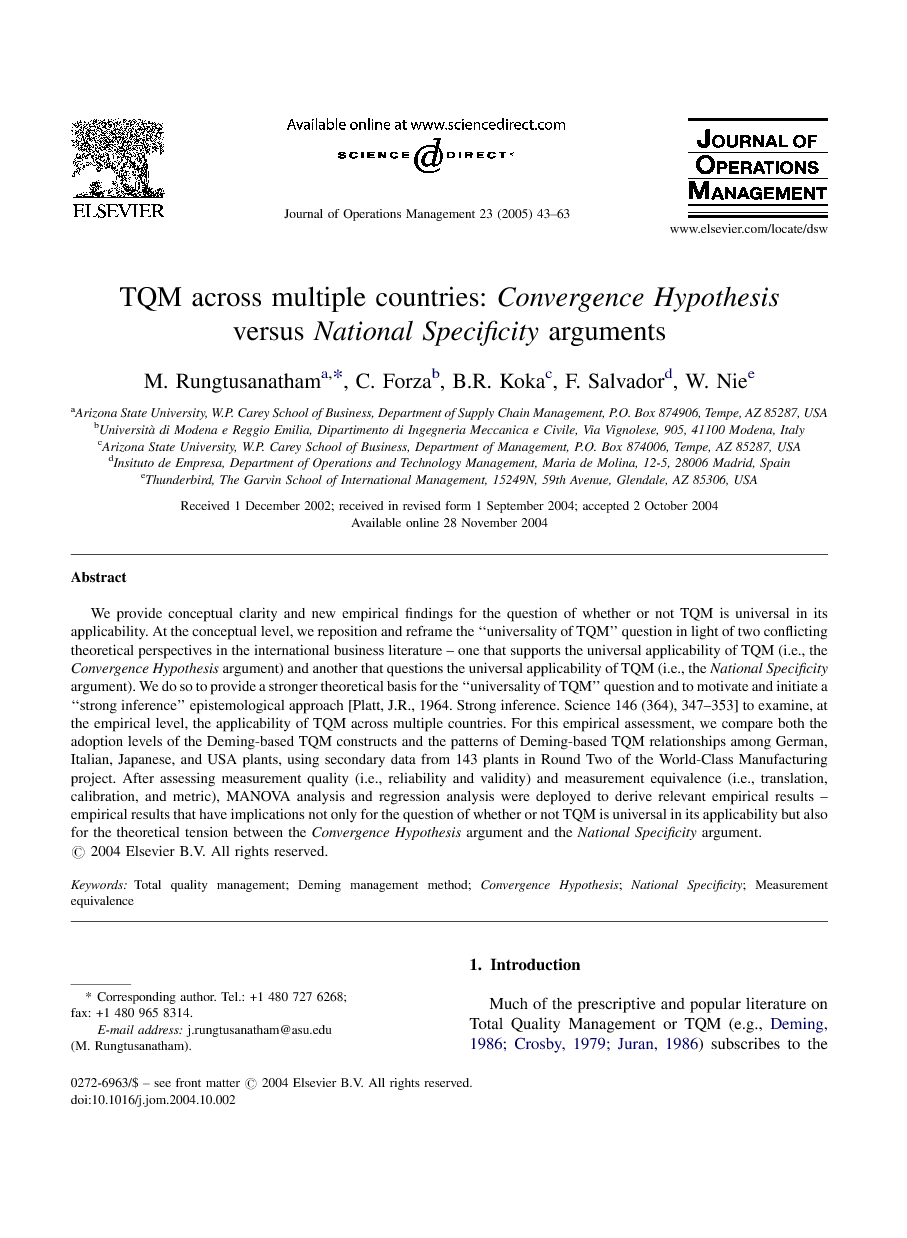 Much of the prescriptive and popular literature on Total Quality Management or TQM (e.g., Deming, 1986, Crosby, 1979 and Juran, 1986) subscribes to the perspective that TQM is “universal” in its applicability (Dawson, 1994). This perspective appears to underlie not only the institutionalization of numerous quality awards at the international and national levels (e.g., European Quality Award, the Malcolm Baldrige National Quality Award) but also the continuing emphasis on certification schemes (e.g., QS 9000, IS 9000) that mirror one another in both content and process (Uzumeri, 1997). Perpetuating and supporting this perspective have been several streams of related research, including documentations of successful organizational adoptions of TQM globally (e.g., Birch and Pooley, 1995, Jenner et al., 1998, Mitki and Shani, 1995 and Sohal et al., 1989), cross-national comparative studies concluding in favor of mimicking TQM practices across countries (e.g., Dahlgaard et al., 1998, Ebrahimpour, 1985 and Yavas, 1995), and writings encouraging firms in developing countries to adopt TQM (e.g., Lahke and Mohanty, 1994 and Lee et al., 1992). Mitki and Shani (1995, p. 169), for example, concluded that TQM contains “a universal set of management practices and principles that goes beyond cultural boundaries”. Yet, not everyone adheres to this “universality of TQM” perspective. These scholars question the “one size fits all” presumption of TQM (Newman and Nollen, 1996, p. 753) and argue that differences in sociopolitical and socioeconomic factors should and would inhibit the cross-cultural transferability and applicability of TQM concepts, principles, and practices (Goonatilake, 1998, Mersha, 1997, Roney, 1997, Rungtusanatham et al., 1998 and Yoshida, 1989). Roney (1997), for example, documented the cultural, sociopolitical, and socioeconomic barriers that impeded the smooth transfer of TQM from a USA-based company to its facility in Poland.

7. Conclusions That management theory and practices are culturally bound, as Hofstede (1980b) has asserted, may be too strong and too general a statement, particularly in the case of TQM. As demonstrated in this paper, TQM is a comprehensive management paradigm with many definitional elements and relationships that appear to transcend cultural and national boundaries. While convergence across all four countries under investigation with respect to the applicability of TQM was not supported, we must, however, exercise caution in making this conclusive statement, since a country-to-country, case-by-case examination reveals some support for the Convergence Hypothesis argument, particularly between Japan and the USA with respect to TQM. Interestingly, while there has been considerable theorizing as to the prospect of convergence for management theory to date, empirical findings supporting the Convergence Hypothesis side of the debate has been rare, with much of the empirical findings tending to side with the National Specificity argument (e.g., Kelley et al., 1987 and Ralston et al., 1997). With the observed similarities in the applicability of TQM between Japan and the USA and, to a lesser extent, between Germany and Italy, the current study may, very well, be one of only a handful to provide some preliminary evidence that the adoption of certain management practices (in this case, TQM) across different countries (e.g., Japan and the USA; Germany and Italy) can possibly follow indistinguishable patterns. As we continue with this line of scientific inquiry, instead of debating whether or not TQM, in its entirety, is applicable across various settings, we should, perhaps, be asking more specifically about which TQM constructs and TQM relationships are applicable/not applicable across which countries, as well as how and why such would be the case. Future research, in this respect, can focus, for example, on the adoption of specific definitional and/or relational elements of TQM in developing countries, countries with centrally planned economies, and/or countries transforming from a planned economy to a market economy.