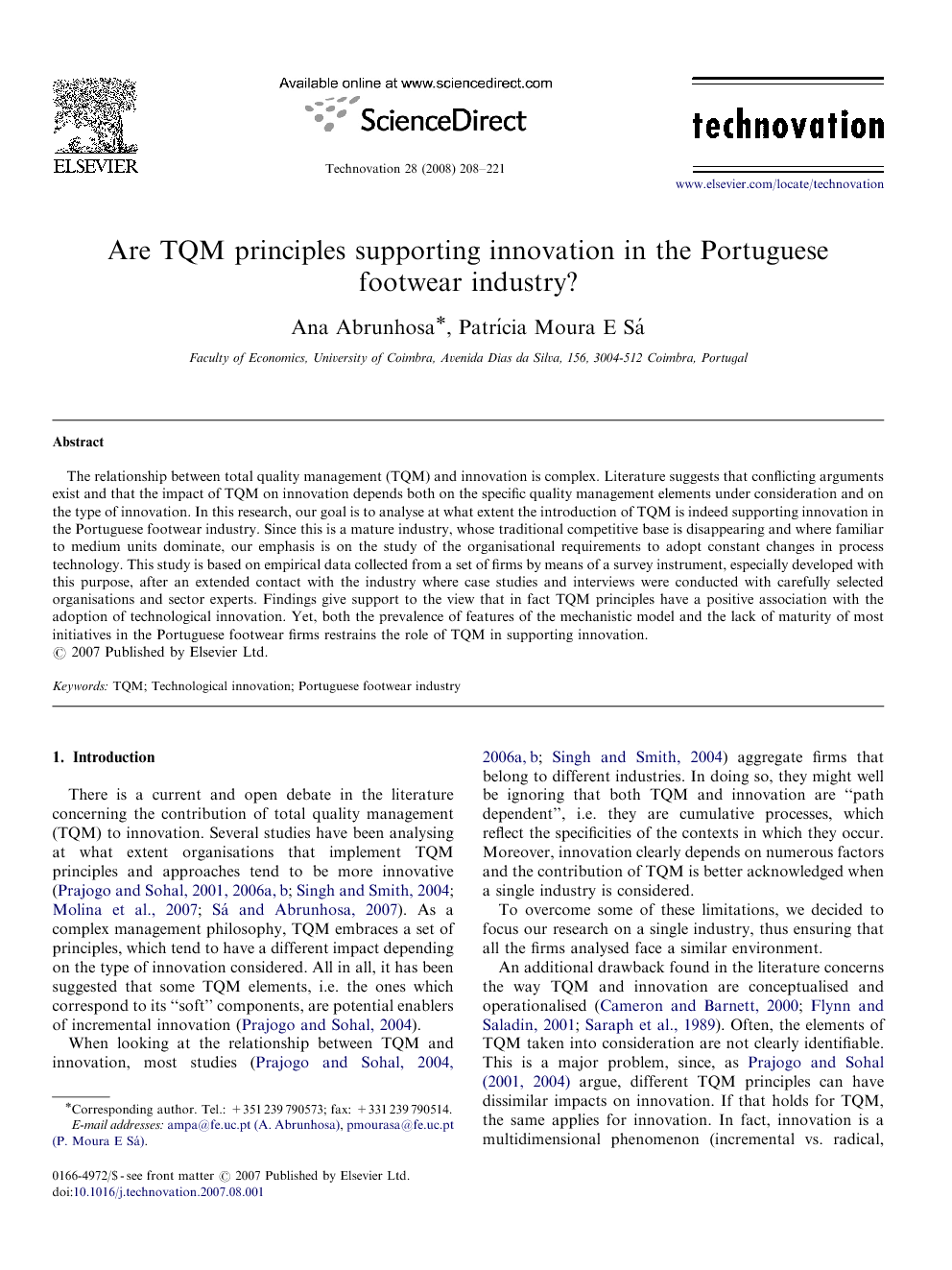 The relationship between total quality management (TQM) and innovation is complex. Literature suggests that conflicting arguments exist and that the impact of TQM on innovation depends both on the specific quality management elements under consideration and on the type of innovation. In this research, our goal is to analyse at what extent the introduction of TQM is indeed supporting innovation in the Portuguese footwear industry. Since this is a mature industry, whose traditional competitive base is disappearing and where familiar to medium units dominate, our emphasis is on the study of the organisational requirements to adopt constant changes in process technology. This study is based on empirical data collected from a set of firms by means of a survey instrument, especially developed with this purpose, after an extended contact with the industry where case studies and interviews were conducted with carefully selected organisations and sector experts. Findings give support to the view that in fact TQM principles have a positive association with the adoption of technological innovation. Yet, both the prevalence of features of the mechanistic model and the lack of maturity of most initiatives in the Portuguese footwear firms restrains the role of TQM in supporting innovation.

This paper has investigated the role of TQM in supporting innovation in the Portuguese footwear sector, which is clearly a traditional and mature industry. As an industry that is facing a process of dynamic transformation, it must look for new competitive factors to maintain and gain competitiveness in the new global market. In this regard, technology by itself may not be sufficient. It must be complemented with new forms of innovation, namely organisational innovation, which is associated with the implementation of the “soft” elements of TQM. Yet, the relationship between TQM and innovation is rather controversial, as several previous studies indicate: the impact of different TQM dimensions in the various types of innovation is difficult to generalise. In this sense, we have concentrated on those TQM elements that are potentially more supportive of the kind of innovation that applies to the industry under analysis (incremental technological/process innovation). As our findings indicate, TQM is a holistic philosophy that calls for the simultaneous implementation of its key principles. The correlations found among its elements are high, suggesting that they complement each other. The results obtained in this study tend to support most of our proposed relationships between the TQM dimensions chosen and (technological) innovation. Thus, the hypotheses concerning the impact of communication, teamwork and supportive people management practices on innovation were confirmed. In the remaining cases, the strength of the relationships was low, making the regression coefficients not statistically significant. Yet, it is important to notice that the relatively weak associations between certain TQM dimensions and innovation adoption do not imply that those principles do not play an important role in driving innovation. Moreover, the Portuguese footwear industry is still dominated by the features of the mechanistic model (e.g. high centralisation, functional structure, vertical hierarchy, specialisation), mainly at the shopfloor level, even if there are some signs of the introduction of certain practices that belong to the organic paradigm (e.g. communication, shared beliefs, polyvalence).