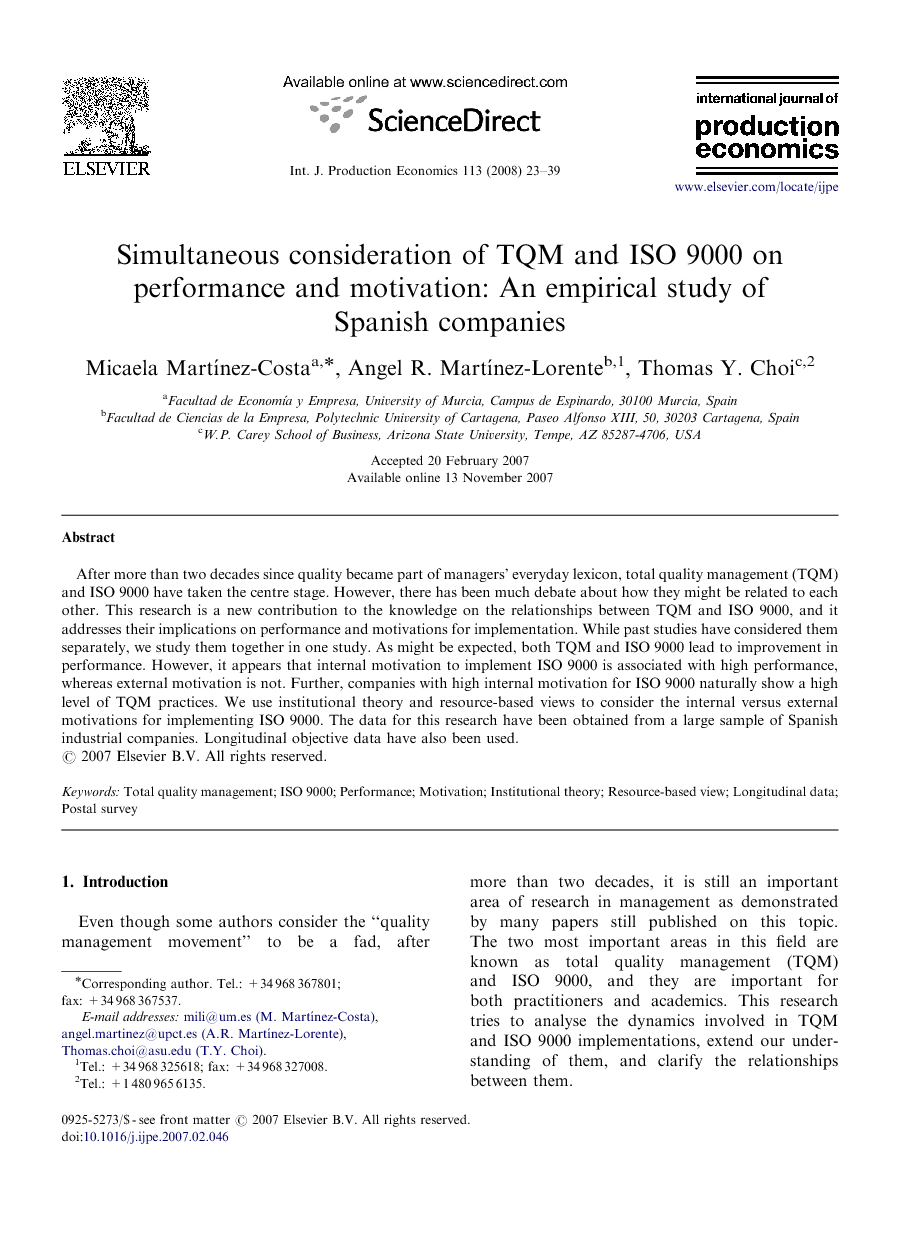 After more than two decades since quality became part of managers’ everyday lexicon, total quality management (TQM) and ISO 9000 have taken the centre stage. However, there has been much debate about how they might be related to each other. This research is a new contribution to the knowledge on the relationships between TQM and ISO 9000, and it addresses their implications on performance and motivations for implementation. While past studies have considered them separately, we study them together in one study. As might be expected, both TQM and ISO 9000 lead to improvement in performance. However, it appears that internal motivation to implement ISO 9000 is associated with high performance, whereas external motivation is not. Further, companies with high internal motivation for ISO 9000 naturally show a high level of TQM practices. We use institutional theory and resource-based views to consider the internal versus external motivations for implementing ISO 9000. The data for this research have been obtained from a large sample of Spanish industrial companies. Longitudinal objective data have also been used.

Even though some authors consider the “quality management movement” to be a fad, after more than two decades, it is still an important area of research in management as demonstrated by many papers still published on this topic. The two most important areas in this field are known as total quality management (TQM) and ISO 9000, and they are important for both practitioners and academics. This research tries to analyse the dynamics involved in TQM and ISO 9000 implementations, extend our understanding of them, and clarify the relationships between them. Studies analysing the impact of quality management on company performance have been conducted by many scholars, and largely they have considered TQM and ISO 9000 separately. Most of the studies regarding the TQM's effect on performance have indicated a positive correlation with performance and/or customer satisfaction (Shetty, 1993; Choi and Eboch, 1998; Easton and Jarrell, 1998; Adams et al., 1999; Terziovski and Samson, 1999 and Terziovski and Samson, 2000; Hendricks and Singhal, 1996, Hendricks and Singhal, 2001a and Hendricks and Singhal, 2001b). Regarding ISO 9000, researchers such as Corbett et al. (2005) recently found a positive financial impact of ISO 9000. However, for a long time, there was no general agreement regarding the effects of ISO 9000 on the company performance. There were some optimistic views (Docking and Dowen, 1999: Gupta, 2000; Romano, 2000; Withers and Ebrahimpour, 2001), and there were also pessimistic findings (Terziovski et al., 1997; Simmons, 1999; Lima et al., 2000; Hua et al., 2000; Aarts and Vos, 2001; Singels et al., 2001; Wayhan et al., 2002). A few papers indicated the salience of the source of the implementation motivation on outcome variables; whether the source is the internal drive for improvement or the reaction to external requirement matters on how much the company benefits from implementing TQM or ISO 9000. For instance, in their study of TQM implementation at parts supplier plants, Choi and Eboch (1998) pointed out that when the motivation for implementing TQM comes from external sources (i.e., industrial customers), the impact on customers satisfaction is much stronger and direct compared with the impact on internal plant performance results. The literature regarding ISO 9000 also pointed out the importance of implementation motivation. Companies applying ISO 9000 by external motivation such as customer pressure or as a promotional tool saw fewer benefits from it than those companies that were convinced of ISO 9000's possibilities to improve management practices and, consequently, performance (Huarng, 1998; Van der Wiele et al., 2000; Withers and Ebrahimpour, 2001; Singels et al., 2001). In this regard, the source of motivation, whether internal or external, refers to where the firm wants the implementation of TQM or ISO 9000 to have an effect—we call it external motivation if the firms want the implementation to have an effect on external perception of the firm, and we call it internal motivation if the firms want the implementation to have an effect on internal business processes.