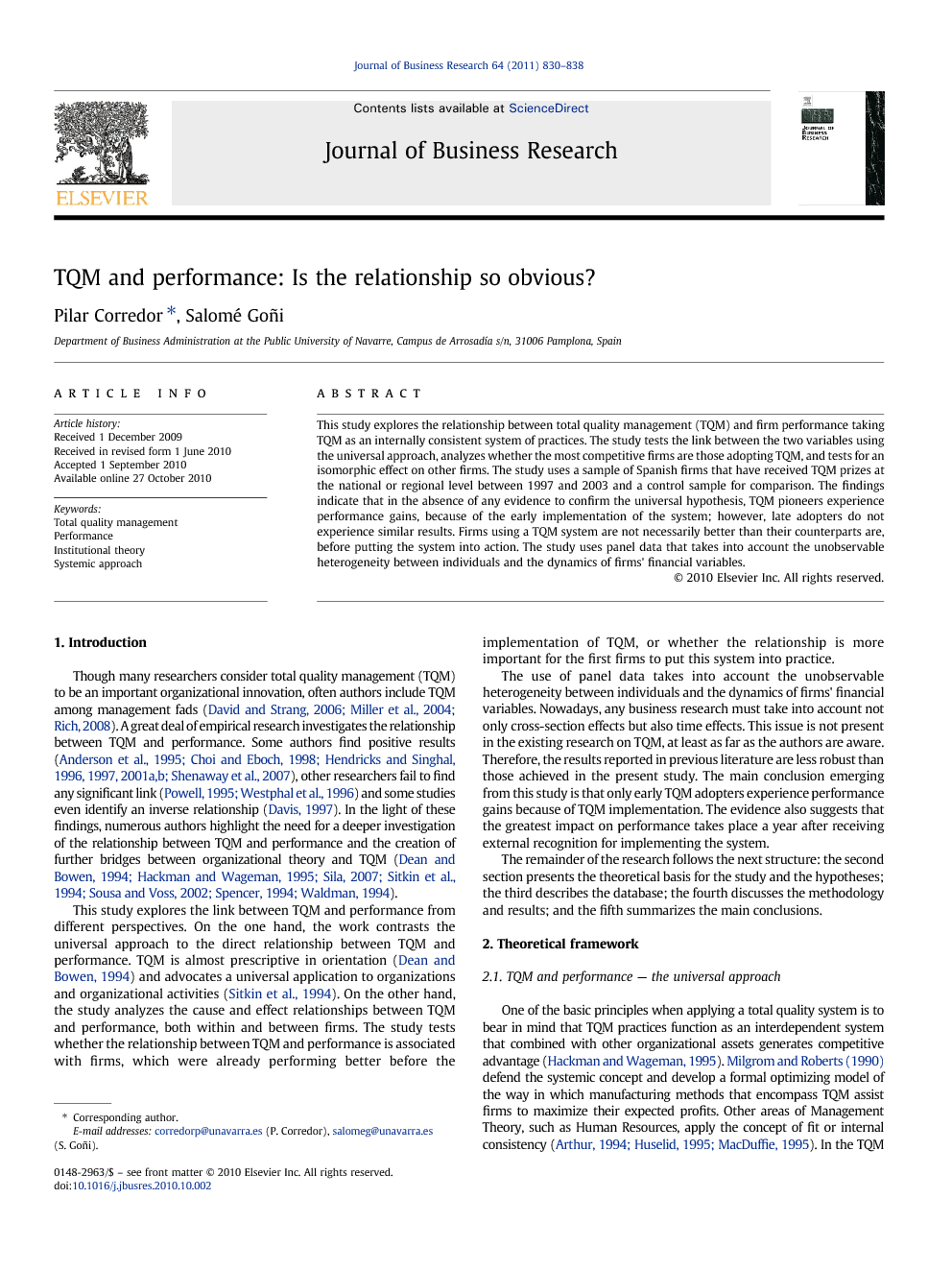 This study explores the relationship between total quality management (TQM) and firm performance taking TQM as an internally consistent system of practices. The study tests the link between the two variables using the universal approach, analyzes whether the most competitive firms are those adopting TQM, and tests for an isomorphic effect on other firms. The study uses a sample of Spanish firms that have received TQM prizes at the national or regional level between 1997 and 2003 and a control sample for comparison. The findings indicate that in the absence of any evidence to confirm the universal hypothesis, TQM pioneers experience performance gains, because of the early implementation of the system; however, late adopters do not experience similar results. Firms using a TQM system are not necessarily better than their counterparts are, before putting the system into action. The study uses panel data that takes into account the unobservable heterogeneity between individuals and the dynamics of firms' financial variables.

Following TQM as a global business management system, firms apply a set of principles and practices in order to obtain a competitive advantage. Much research analyzes the impact of the various TQM practices on firm performance. The present study, however, uses a systemic approach. For the system to function effectively, the firm's organizational culture must undergo a global change, involving the introduction of a set of principles and practices. The study analyzes the TQM–performance relationship from the universal approach and examines the cause–effect relationship between TQM and performance within and between firms. The research addresses the question of whether TQM-adopting firms are already more efficient before deciding to introduce this organizational innovation into their management framework. The study also explores two further issues. The first is whether pioneer firms adopt this organizational innovation as a means to gain competitive advantage. The second is whether an isomorphic effect among other firms exists. This effect could be due to the success and relevance of TQM in the business world, or to the wide publicity and advertising given to cases where the introduction of the system has resulted in competitive advantage for the firm in question. The most important contribution is the use of panel data. This approach allows for unobservable individual heterogeneity and controls for possible macroeconomic effects on firm performance, which increases the robustness of the results. The main conclusions emerging from this study cast doubt on previous research findings that claim that the implementation of this type of management system invariably leads to performance gains. The results are consistent with studies that question the universal view of TQM and signal the need to include more factors in the analysis. Only pioneer TQM adopters experience performance gains because of implementation and present a higher average performance level than the control firms. This finding confirms that a desire to improve performance often drives early adopters of organizational innovations. The evidence also suggests that the greatest impact on performance takes place a year after receiving external recognition for implementing the system. This implies a long-term effect, taking into account that the firms fully develop the system after an interval of at least two years before receiving the award.