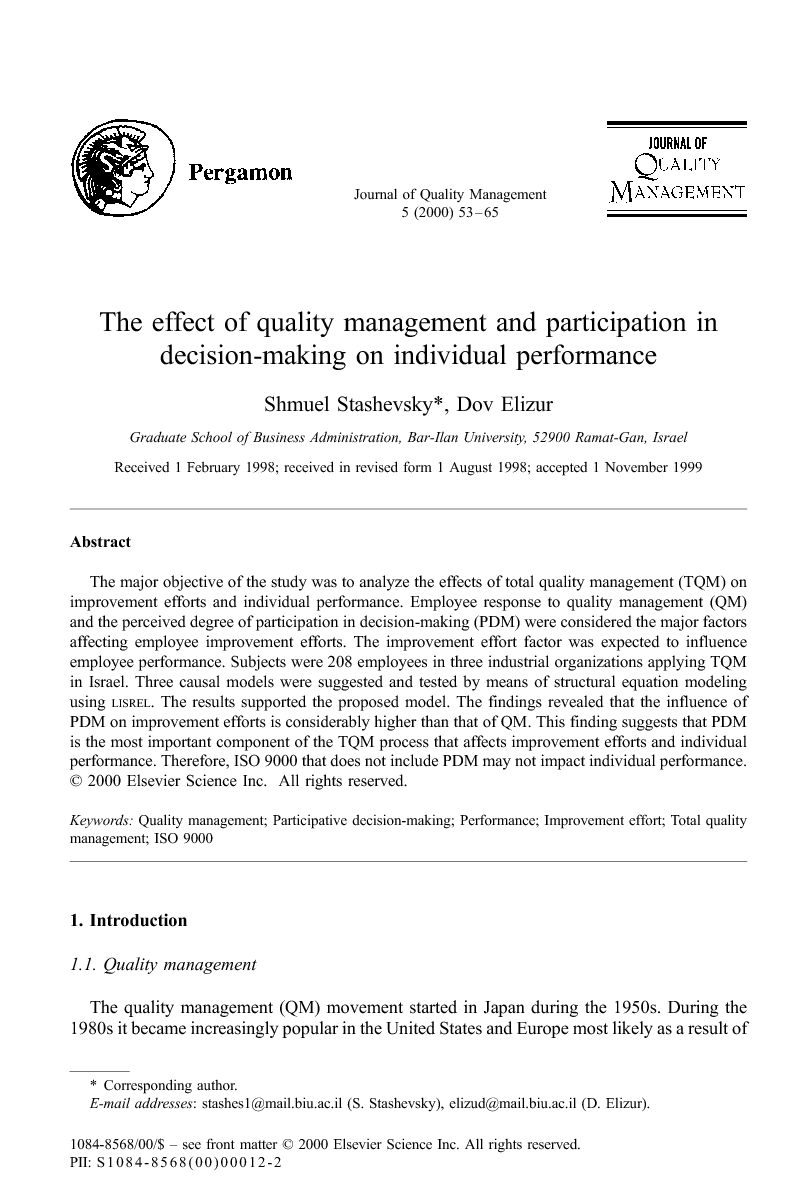 1.1. Quality management The quality management (QM) movement started in Japan during the 1950s. During the 1980s it became increasingly popular in the United States and Europe most likely as a result of the success of Japanese firms in a number of global markets (Lawler, 1994). During the 1990s, QM is fast becoming one of the main issues in many organizations and is usually referred to as total quality management (TQM). A report, based on a survey of Fortune 1000 companies, concluded that 76% of the companies implemented TQM programs (Lawler et al., 1995). TQM is a management philosophy embracing all activities through which the needs and expectations of the customer and the community and the objectives of the organization are satisfied in the most efficient and cost effective way by maximizing the potential of all employees in a continuing drive for improvement (BS.4778: Part 2, 1991). The three main principles of TQM are customer focus, continuous improvement, and teamwork (Dean & Bown, 1994). People are the key element in achieving these principles (Kanji et al., 1995). TQM pushed the development and the enormous spread of the ISO 9000 quality standards. Adopting these standards enable an organization to demonstrate to its customers that its processes are both capable and under control, and there is effective control over procedures and systems (Dale, 1994). For many organizations attaining ISO 9000 certification is a necessity in order to survive (Meegan & Taylor, 1997). Both ISO 9000 and TQM focus on quality, but ISO 9000 lacks the participative decision-making (PDM) and the continuous improvement principles, two basic principles of TQM. The present study attempts to examine the contribution of these two variables within the QM context. The scholarly published material on quality programs is rather limited (Shani & Rogberg, 1994). Most of the research on TQM has been performed from the manager's point of view. Research on employee responses is scarce. The present study attempts to fill in the gap by focusing on the employees and their responses. Specifically, the study attempts to tease apart PDM from the quality effort and estimate the impact of this component on employee improvement effort. The following sections briefly review the major topics of importance to the study. 1.2. Participation in decision-making PDM is one of the basic principles of TQM and is considered a key factor in TQM success (e.g., Deming, 1982, Deming, 1986 and Stone & Eddy, 1996). PDM is usually defined as mutual influence of supervisors and subordinates in organizations Vroom, 1960, Mitchell, 1973 and Wagner & Gooding, 1987. PDM is a motivational program designed for improving performance and work satisfaction (Cotton, 1993). There is empirical evidence that employees consider PDM as the major motive for participating in TQM (Kowalski & Walley, 1993). On the other hand, doubts have been raised concerning the practicality of combining TQM and PDM Randeniya et al., 1995, Watson & Korukonda, 1995 and Wilkinson & Willmott, 1996. The present study attempts to examine the relative effects of QM and PDM on individual organizational outcomes. 1.3. Total quality management and performance Improving employee performance is the main purpose of organizational improvement programs. Organizations usually rely on supervisors' assessments as a measure of employee performance Cardy & Dobbins, 1996 and Viswesvaran et al., 1996. Empirical studies on the relationship between TQM and performance have usually been done at the organizational level, rather than at the individual level, which is the focus of the present study. Further, many studies were based on managerial impressions rather than performance as the dependent measure. The sample size in many studies has been limited. Most empirical studies have found TQM to have positive effects on organizational performance Moreno-Luzon, 1993, Mann & Kehoe, 1994, Wilkinson et al., 1994, Lawler et al., 1995 and Radovilsky et al., 1996. However, some studies have found considerably high failure rates in applying TQM (Harari, 1993). It can be concluded that when TQM is well implemented it can help an organization improve itself and, in the process, better serve its community and its own members (Hackman & Wageman, 1995). 1.4. Participation in decision-making and performance The impact of PDM on performance has been thoroughly studied since the 1940s. Nevertheless, the findings of meta-analysis studies have been ambiguous. Some of them claim that there is almost no impact (Wagner, 1994), while others claim that the impact is statistically significant Sagie, 1994 and Wagner et al., 1997. Multivariate studies, where PDM was accompanied with other programs, found higher effects as compared with studies including PDM only Guzzo et al., 1985 and Sagie, 1994. The present study examines the effect of PDM on performance in the context of quality improvement program. 1.5. Improvement effort Continuous improvement effort is one of the major objectives of TQM. It is typically assumed in the quality literature that continuous improvement effort will lead to improved job performance. Improvement effort is the immediate expected outcome of improvement programs (Boaden, 1996). There is theoretical support for the practical expectation that effort is critical to job performance. For example, the concept of effort plays an important role in expectancy theory of motivation to work Vroom, 1964 and Porter & Lawler, 1968. According to the model suggested by Porter and Lawler (1968) effort leads to increased performance. This relationship is moderated, however, by the ability the person has to do the job and the clarity of understanding a person has concerning what the job consists of. We propose to define improvement effort as a continuous voluntary exertion by a person to accomplish the tasks in the best possible way.

Three alternative models describing the main factors affecting improvement efforts and individual performance were suggested. The first model assumes that QM by itself is the major influencing factor. The second model suggests that PDM is the main influencing factor, while the third model assumes that QM and PDM jointly provide the strongest effect on improvement effort and individual performance. The three alternative models were analyzed by structural equation modeling. Path analysis was performed to check the goodness-of-fit of the three models to the empirical data. The integrative model that postulates a combined effect of QM with PDM was found to be the preferred model. The integrative model with the β coefficients of the relationships is presented in Fig. 4.The results indicate that both QM and PDM affect improvement effort and consequently individual performance. However, the relative impact of PDM is much stronger than that of QM (β: 0.46 vs. 0.16). The same result can be observed in Table 1: The correlation coefficient between QM and individual performance is positive but very low (0.09), indicating a positive but non-significant relationship. The correlation coefficient between PDM and individual performance, on the other hand, is 0.25, indicating a considerably stronger relationship at a P<0.001 level of significance. These findings indicate that improvement effort, and consequently, individual performance, are affected mainly by PDM and less by QM. Since this study is the first to examine these relationships from the individual perspective, further research is called for. However, improving individual performance does not necessarily imply immediate improvement in organizational performance, since there are many other intervening factors which may have an impact on organizational results (Goodman et al., 1994). Some support for the present findings can be found in a study involving British employees of manufacturing firms implementing new manufacturing strategies, including TQM (Parker et al., 1997). The authors concluded that interventions designed to empower employees, such as self-managed teams, may enhance employees' sense of authority and improve the implementation of new manufacturing processes. TQM together with PDM constitutes a multivariate program. Such a program may be expected to have a stronger effect on individual performance than each of the elements by itself Guzzo et al., 1985 and Sagie, 1994. The correlation coefficients found in this study between PDM and individual performance are higher than the average in meta-analyses of studies on PDM (e.g., Wagner, 1994). Our findings concerning the relationships between QM, PDM, and performance at the individual perspective are supported also by the results of a study at the organizational level. A comprehensive survey of Fortune 1000 companies revealed that applying TQM together with PDM had a strong relationship with organizational performance (Lawler et al., 1995). There are limitations of this study that require consideration in future research. The study was conducted in Israel with samples of Israeli employees. In Israel, a dynamic developing country, perhaps people are more inclined to participate in change programs, and are rather interested to be involved in decision-making. In more conservative societies, however, it may be that people are more ready to accept decisions and follow instructions. Thus, it is advisable to replicate the study in other cultures to see whether similar results will be obtained. Similarly, there may be differences in responses to change programs like QM between types of organizations, and types of jobs. The study was conducted in industrial organizations. It might be that in other sectors, such as the service and the public sectors, employee attitudes toward QM and their response to PDM would be different. The sample characteristics, 68% rank and file employees and 32% middle-level managers, might cause a bias because the PDM level as well as performance assessments are supposed to be higher for managers as compared to regular employees. Replication of the study with wider samples that would enable analysis by job types and hierarchical levels would be helpful to clarify this issue. The study opens wide opportunities for continuing research. Other variables that are not included in the model can contribute to more comprehensive understanding. Such variables may include work attitudes, such as job satisfaction and organizational commitment, as well as an important outcome variable of the TQM philosophy — customer satisfaction. QM can be divided into several components, such as use of quantitative tools and teamwork. Additional variables influencing individual behavior can be included in the model, such as the various organizational referents: management, the superior, and the colleagues. It may also of interest for further research to examine the relationships between the study variables and individual background data, such as gender, education, age, experience, and seniority. Based on the results of this study it may be concluded that PDM is critical for successful application of TQM in organizations. TQM without Participation is like a body without soul. Therefore, attaining ISO 9000 certification without implementing a PDM program might not improve individual performance. Implementing quality programs jointly with PDM appears to lead to better individual results as compared to implementing each of these programs by itself. Improvement effort was found to have strong impact on individual performance. The practical conclusion is that programs that succeed in motivating employees to improvement efforts can lead to higher individual performance.