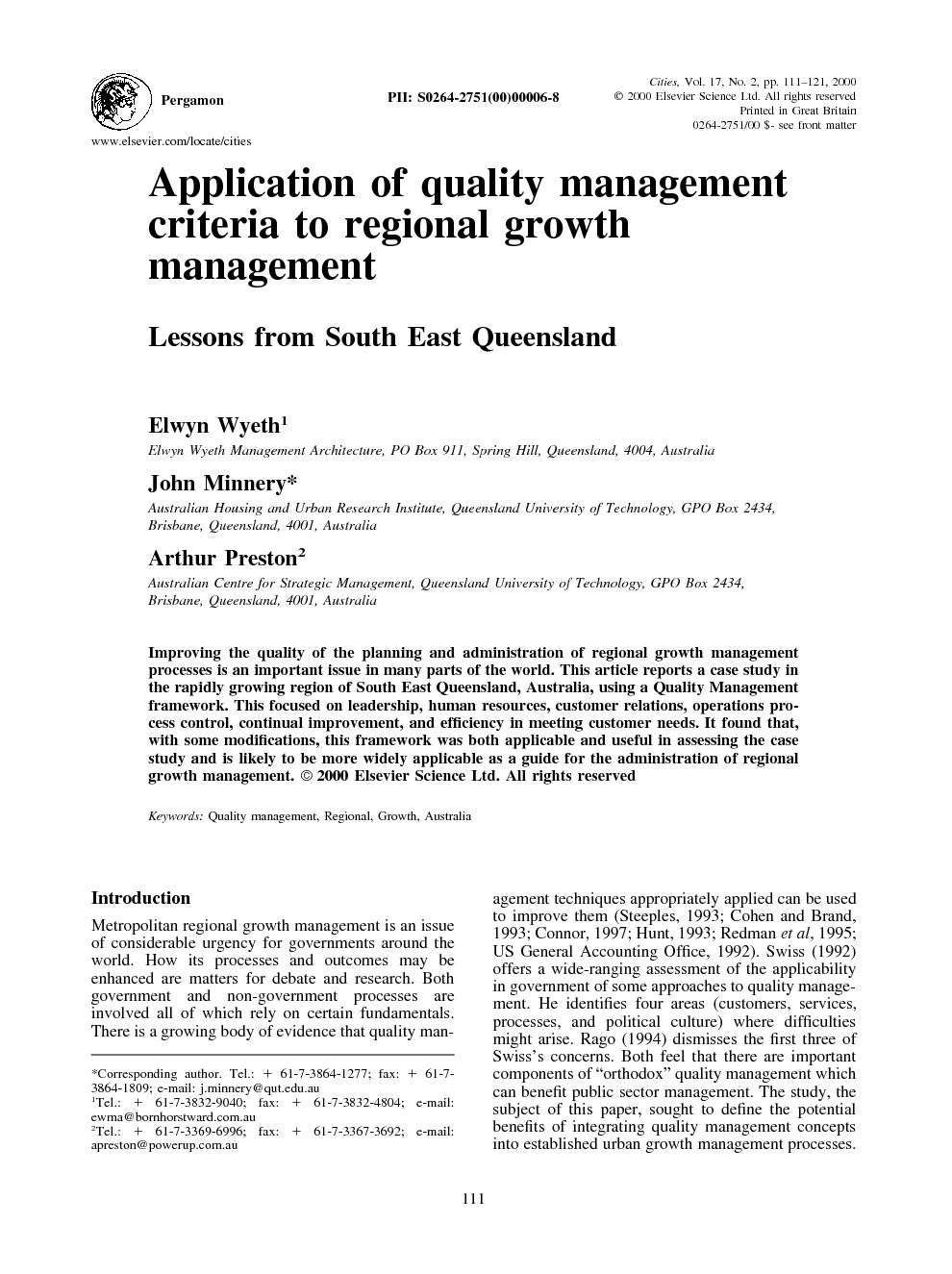 Improving the quality of the planning and administration of regional growth management processes is an important issue in many parts of the world. This article reports a case study in the rapidly growing region of South East Queensland, Australia, using a Quality Management framework. This focused on leadership, human resources, customer relations, operations process control, continual improvement, and efficiency in meeting customer needs. It found that, with some modifications, this framework was both applicable and useful in assessing the case study and is likely to be more widely applicable as a guide for the administration of regional growth management. Gadget timed out while loading

Regional planning is experiencing a resurgence in Europe, the Americas and the Asia-Pacific (Brenner, 2002, Söderbaum and Shaw, 2003, Wolfe, 2003 and McGrath-Champ, 2005), with city-regions such as Milan-Lombardy, Barcelona-Catalonia, the San Francisco Bay Area, and Tokyo-Nagoya-Osaka leading the way. Wallis (2006) believes we are witnessing the rapid emergence of a global system of regions. However, regional planning is not a new concept, Wheeler (2002) having described five broad eras. These included: ecological regionalism in the early 20th century (e.g., Geddes, 1915/1949 and Mumford, 1925); regional science in the late 1940s (e.g., Friedmann and Alonso, 1964 and Isard, 1975); Marxist regionalism of the late 1960s (e.g., Harvey, 1973 and Castells, 1977); public choice regionalism during the 1960s; and the current era of new regionalism (e.g., Storper, 1995, Keating, 1998, Amin, 1999, Lovering, 1999, Hettne and Söderbaum, 2000 and MacLeod, 2001), which emerged in the 1990s in response to the impacts of globalization and metropolitan growth (e.g., suburban sprawl, traffic congestion, loss of biodiversity, declining quality of life, and growing social and equity issues). While key concepts related to new regionalism continue to be debated (Lovering, 1999, Lovering, 2001 and Wheeler, 2002), the focus to date has been on approaches emphasizing economic drivers and growth management (Storper, 1995, Storper, 1997, Dredge, 2005 and Rannie and Grobbelaar, 2005), with lesser concern for social capital and democracy (Scott, 1996, Scott, 1998, Putman, 1993, Hirst, 1997 and Smyth et al., 2004), territorial government (Harvie, 1994, Harding et al., 1996, Keating, 1997 and Keating, 1998) and political issues (Paasi, 1991, Keating, 1998, Amin, 1999, Deas and Ward, 2000 and MacLeod, 2001) within regions. Within these conceptual differences there has been a growing interest in regional environmental sustainability (Thackway and Cresswell, 1995, Sattler and Williams, 1999 and Shaw, 2000) as new regionalism espouses the need to integrate environmental, economic and social concerns to achieve more sustainable regional outcomes. However, in practice, the outcomes of new regionalism indicate that it continues to privilege economic growth over environmental concerns, especially biodiversity conservation (Chatterton, 2002). The majority of studies of regionalism have been concerned with macro-regions (world regions) such as the European Union (Tomaney and Ward, 2000 and Haughton and Counsell, 2004), the Association of South-East Asian Nations (Harvie and Lee, 2002 and Chandra, 2004) and Southern African Development Community (Shaw, 2000). However, Söderbaum (2003) and Dredge (2005) call for the study of regionalism at meso (i.e., national and state) and micro (i.e., within a state) scales. South East Queensland (SEQ or “the Region”) (Fig. 1) is a suitable case study to critically analyse new regionalism as played out at the micro-regional level. It has an area of about 2.25 million ha, stretches 250 km from north to south and 100 km from east to west and includes the cities of Brisbane, Toowoomba and the Gold Coast. It consists of 18 local governments organised into four sub-regional groups and is the fastest growing region in Australia, with a total population projected to grow to between 3.5 and 4 million people by 2026 (OUM, 2005). Around 22% of Australia's total population growth in 2000 occurred in SEQ (EPA, 2003).The Region's urban structure is polycentric with growth focused on Brisbane (the State's capital), the Gold Coast and several other smaller coastal settlements (e.g., Caloundra and Maroochydore) and extending inland to include the cities of Ipswich and Toowoomba (Fig. 1). A 200 km city extending along the eastern seaboard has been mooted as a possible outcome of continued, unplanned regional growth (Spearritt, 2002 and Brisbane Institute, 2005). As well as being Australia's most rapidly growing region, SEQ is also one of the nation's most biologically diverse (Young and Dillewaard, 1999 and EPA, 2003). However, the lack of effective conservation planning and the Region's focus on economic development has resulted in sprawling urban and rural residential areas and the loss of biodiversity, especially in areas of high development pressure on the more gently sloping coastal lowlands (Catterall and Kingston, 1993, Catterall et al., 1996 and Catterall et al., 1997). The conservation reserve system, like most others in the world (Pressey, 1994), also does not effectively represent or protect the biodiversity within the Region (McAlpine et al., 2005 and McAlpine et al., 2007). A range of regional planning approaches have been implemented since the 1980s to achieve more sustainable outcomes in the face of very rapid population growth. These approaches have been a response to the absence of statutory planning controls, the inconsistent approaches to planning within the Region and the lack of any coordinated arrangements between the tiers of government to manage unsustainable growth (Regional Coordination Committee [RCC], 2000). While some aspects of new regionalism are evident in SEQ, there are significant gaps between the rhetoric and the on-ground outcomes for nature conservation. A contributing factor is the governance arrangements and the failure to fully mainstream key biodiversity principles within the regional and local planning context. Against this background, this paper presents a critical analysis of new regionalism in SEQ. The focus is on how effectively nature conservation issues have been integrated into the regional planning processes. We begin by briefly describing the key characteristics of new regionalism and then apply these to evaluate several regional nature conservation planning approaches in SEQ. We conclude with the key lessons as to how new regionalism may be advanced at the micro-regional scale. These insights provide direction to regional planners, particularly in relation to institutional and policy innovations to improve regional nature conservation outcomes.

Our case study demonstrates that greater attention needs to be placed on how the ideas and characteristics associated with new regionalism are developed and given meaning on the ground. In particular, governance structures that produce real biodiversity outcomes are fundamental. However, in SEQ there is a gap between the rhetoric and the reality regarding regional nature conservation outcomes and hence in some respects the new regionalism represents more of the same old regionalism. The process was steered by state and local government planners taking the initiative in developing workable methodologies to bring about better understanding and management of biodiversity values and the threats to these values, as well as the identification of planning instruments and cooperative partnerships to effect change. Perhaps the key failure of the process has been the inability to fully mainstream the RNCS into the SEQ Regional Plan, in particular within the Urban Footprint. This is in part due to political factors which favour economic growth above the environment. There are several key lessons we have taken from the regional planning approach in SEQ and which can inform other new regionalist approaches. These include the need to: • link biodiversity assessment processes with implementation processes that incorporate the effective participation of key stakeholders; • mainstream biodiversity policies and actions into a broad range of planning processes; • ensure holistic and integrated approaches that incorporate the best available science as well as the consensus of local knowledge and expert opinion; and • adaptively plan and manage to ensure the most effective mix of planning mechanisms to achieve regional nature conservation goals.