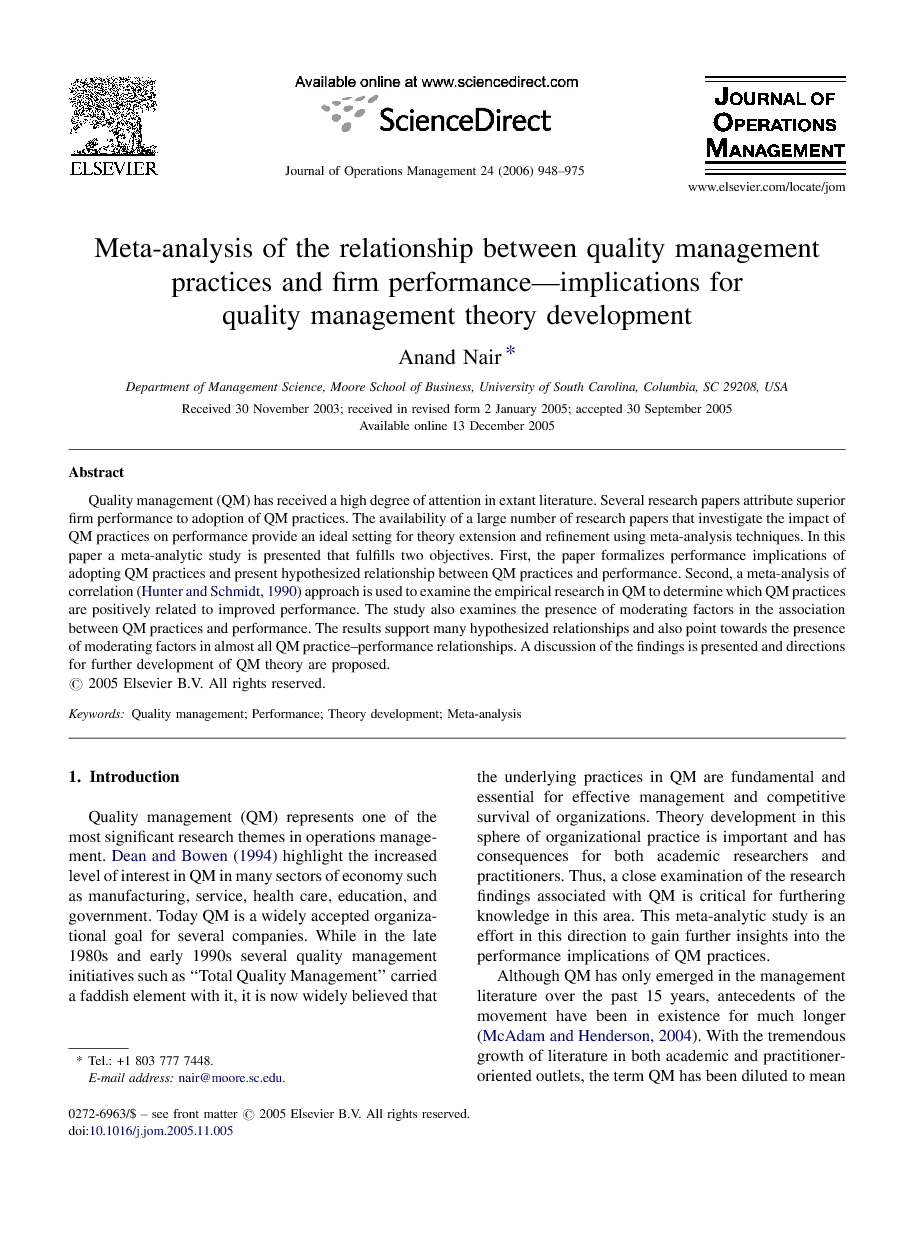 Quality management (QM) has received a high degree of attention in extant literature. Several research papers attribute superior firm performance to adoption of QM practices. The availability of a large number of research papers that investigate the impact of QM practices on performance provide an ideal setting for theory extension and refinement using meta-analysis techniques. In this paper a meta-analytic study is presented that fulfills two objectives. First, the paper formalizes performance implications of adopting QM practices and present hypothesized relationship between QM practices and performance. Second, a meta-analysis of correlation (Hunter and Schmidt, 1990) approach is used to examine the empirical research in QM to determine which QM practices are positively related to improved performance. The study also examines the presence of moderating factors in the association between QM practices and performance. The results support many hypothesized relationships and also point towards the presence of moderating factors in almost all QM practice–performance relationships. A discussion of the findings is presented and directions for further development of QM theory are proposed.

This study of the relationship between QM practices and performance is an effort to extend and refine the theory of QM. It clarifies the associations and provides motivation for further studies towards the development of a comprehensive QM theory. Overall, the results reveal a positive correlation between several QM practices and firm performance dimensions. This provides impetus for practitioners to continue adopting QM practices in their organizations. This study provides some directions for future research. In future empirical studies that examine the performance implications of QM practices, researchers are encouraged to present a detailed correlation matrix that they obtain between the QM practices; between QM practices and performance; and between different performance measures. This will enable more comprehensive meta-analytic studies in future, furthering the process of development of QM theory. Future studies should consider the role of moderating factors in understanding the impact of quality management on various performance measures. Recently, researchers have started an explicit investigation of contextual moderating and mediating effects (Choi and Eboch, 1998, Douglas and Judge, 2001, Sousa and Voss, 2001 and Shah and Ward, 2003), however, more studies are needed to obtain further clarity. Future investigation should evaluate if same moderating variables influence each specific relationship between QM practice and performance or are these moderating effects dependent on specific QM practice and performance measure that is under investigation. Highlighting the approach that companies adopt towards implementing QM, Spencer (1994) state, “QM is a systematic approach to the practice of management, requiring changes in organizational processes, strategic priorities, individual beliefs, individual attitudes, and individual behaviors (Olian and Rynes, 1991). It is not a cut-and-dried reality but an amorphous philosophy that is continuously enacted by managers, consultants, and researchers who make choices based not only on their understanding of the principles of QM but also on their own conceptual frameworks concerning the nature of organizations”. The proponents of the organismic model of QM maintain that a common error in the implementation of QM is the failure to recognize that every company, and every environment, is different (Laza and Wheaton, 1990). Therefore, it is important to properly align QM practices with competitive environments and strategies (Chorn, 1991). Several proponents of QM assert that instead of looking at contextual environments as a vital source of resources and constraints, QM must consider a boundaryless organization. In this view, the boundaries between organizations and environments are blurred and elements that were formerly conceived as part of the environment must now be a part of the organization.