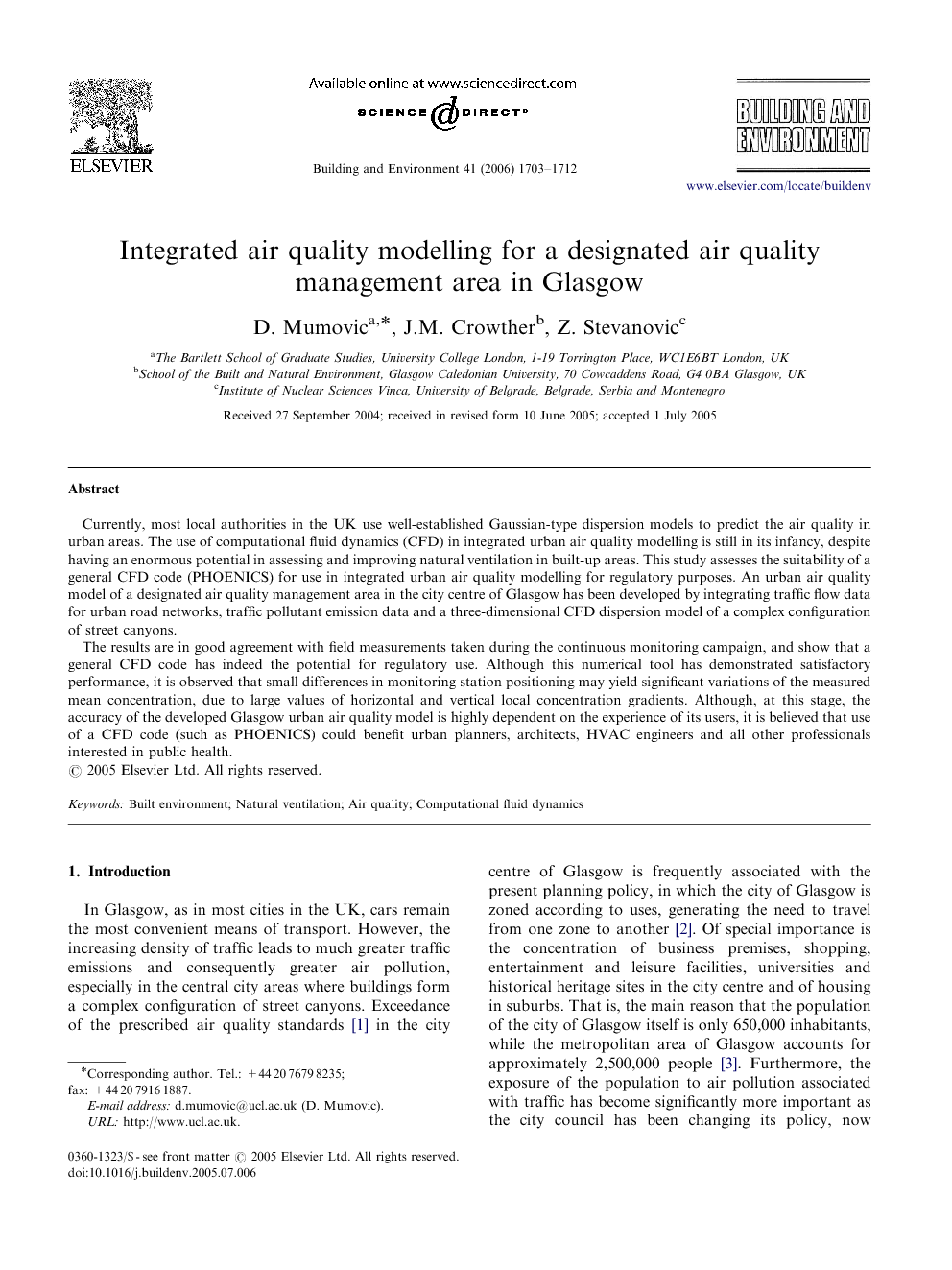 Currently, most local authorities in the UK use well-established Gaussian-type dispersion models to predict the air quality in urban areas. The use of computational fluid dynamics (CFD) in integrated urban air quality modelling is still in its infancy, despite having an enormous potential in assessing and improving natural ventilation in built-up areas. This study assesses the suitability of a general CFD code (PHOENICS) for use in integrated urban air quality modelling for regulatory purposes. An urban air quality model of a designated air quality management area in the city centre of Glasgow has been developed by integrating traffic flow data for urban road networks, traffic pollutant emission data and a three-dimensional CFD dispersion model of a complex configuration of street canyons. The results are in good agreement with field measurements taken during the continuous monitoring campaign, and show that a general CFD code has indeed the potential for regulatory use. Although this numerical tool has demonstrated satisfactory performance, it is observed that small differences in monitoring station positioning may yield significant variations of the measured mean concentration, due to large values of horizontal and vertical local concentration gradients. Although, at this stage, the accuracy of the developed Glasgow urban air quality model is highly dependent on the experience of its users, it is believed that use of a CFD code (such as PHOENICS) could benefit urban planners, architects, HVAC engineers and all other professionals interested in public health.

In Glasgow, as in most cities in the UK, cars remain the most convenient means of transport. However, the increasing density of traffic leads to much greater traffic emissions and consequently greater air pollution, especially in the central city areas where buildings form a complex configuration of street canyons. Exceedance of the prescribed air quality standards [1] in the city centre of Glasgow is frequently associated with the present planning policy, in which the city of Glasgow is zoned according to uses, generating the need to travel from one zone to another [2]. Of special importance is the concentration of business premises, shopping, entertainment and leisure facilities, universities and historical heritage sites in the city centre and of housing in suburbs. That is, the main reason that the population of the city of Glasgow itself is only 650,000 inhabitants, while the metropolitan area of Glasgow accounts for approximately 2,500,000 people [3]. Furthermore, the exposure of the population to air pollution associated with traffic has become significantly more important as the city council has been changing its policy, now supporting the creation of new residential developments within the city centre [4], which will inevitably lead to the formation of deeper street canyons, reducing the natural ventilation. In order to deal with the air quality problems, the city council has designated the city centre of Glasgow as a local air quality management (LAQM) area [5]. Part IV of the Environment Act 1995 lays down the system of LAQM in the UK [6], which now plays a key practical part in the strategy to achieve air quality objectives in urban areas, based on the EU directive 96/32/EC [7]. This framework directive on ambient air quality assessment and management defines the general legislative structure. The directive is supplemented by related daughter directives [8] and [9], which define standard air quality thresholds and, what is more important from the modelling standpoint, the minimum requirements for the assessment of air quality levels in the EU countries [10]. All these legal requirements have been summarised in the technical guidance on the LAQM [11], published in 2003, to provide local authorities with a robust tool to assess and manage air quality in UK cities. Following the technical guidance, the vast majority of local authorities have regarded computational fluid dynamics (and wind tunnel simulations) as too complex to use. As might be expected, use of the well-established Gaussian dispersion models has been suggested, as they have reached maturity [12]. An example is the atmospheric dispersion modelling software (ADMS) developed by CERC [13] and widely used in the UK, and frequently coupled with the traffic flow software called SATURN [14]. Although having an enormous potential in assessing and improving natural ventilation in built-up areas, especially in a complex configuration of street canyons, the use of CFD in integrated urban air quality modelling is still in its infancy. This study aims to assess the suitability of a general CFD code for use in integrated urban air quality modelling for regulatory purposes. By integrating data on traffic flow in urban road networks, traffic pollutant emissions and a three-dimensional model of a complex configuration of street canyons into a CFD dispersion model (PHOENICS), an urban air quality model of a designated LAQM in the city centre of Glasgow has been developed. The modelled results were compared with experimental results obtained during the continuous monitoring campaign in 2002. In order qualitatively to assess an urban air quality model, one has to be aware of the flow patterns that develop around buildings, which govern the distribution of pressure and concentration. The vast majority of studies are focussed on physical processes within a single street canyon, i.e. the concentration distribution is represented as a function of idealised geometrical characteristics of street canyons, wind direction and wind speed [15], [16], [17], [18] and [19]. Although a study of individual street canyons is an essential start in understanding fundamental processes of dispersion of air pollutants, the superimposition and interaction of flow patterns associated with adjacent buildings predominately governs the dispersion of air pollutants within a built environment [20], [21], [22], [23], [24], [25] and [26]. Summarising discussions of the above-mentioned studies, it has emerged that if a general CFD code is to be used in urban air quality modelling for regulatory purposes, the concentration distribution function has to take into account the following parameters:

Numerical modelling of flow patterns and pollutant dispersion in a real complex configuration of street canyons can never result in explicit rules, as numerous assumptions and considerations are needed. To focus on the geometric impact of urban flow, several suggestions could be made using this study: (a) crossroads introduce lateral eddies into the canyon, (b) small differences in monitoring station positioning may yield significant variations of the measured mean concentration, due to large values of horizontal and vertical local concentration gradients, (c) monitoring stations positioned at the lower leeward side of a street canyon might lead to an inaccurate assessment of pollution level within a street canyon and (d) in the upper part of the street canyon iso-concentration lines are almost parallel. PHOENICS coupled with SATURN and EFT 2e predict concentration levels in urban street canyons reasonably well; although it systematically over-predicts in high concentration zones. From the generally high accuracy of predictions it has been shown that CFD has the potential to be used in integrated urban air quality modelling for regulatory purposes.