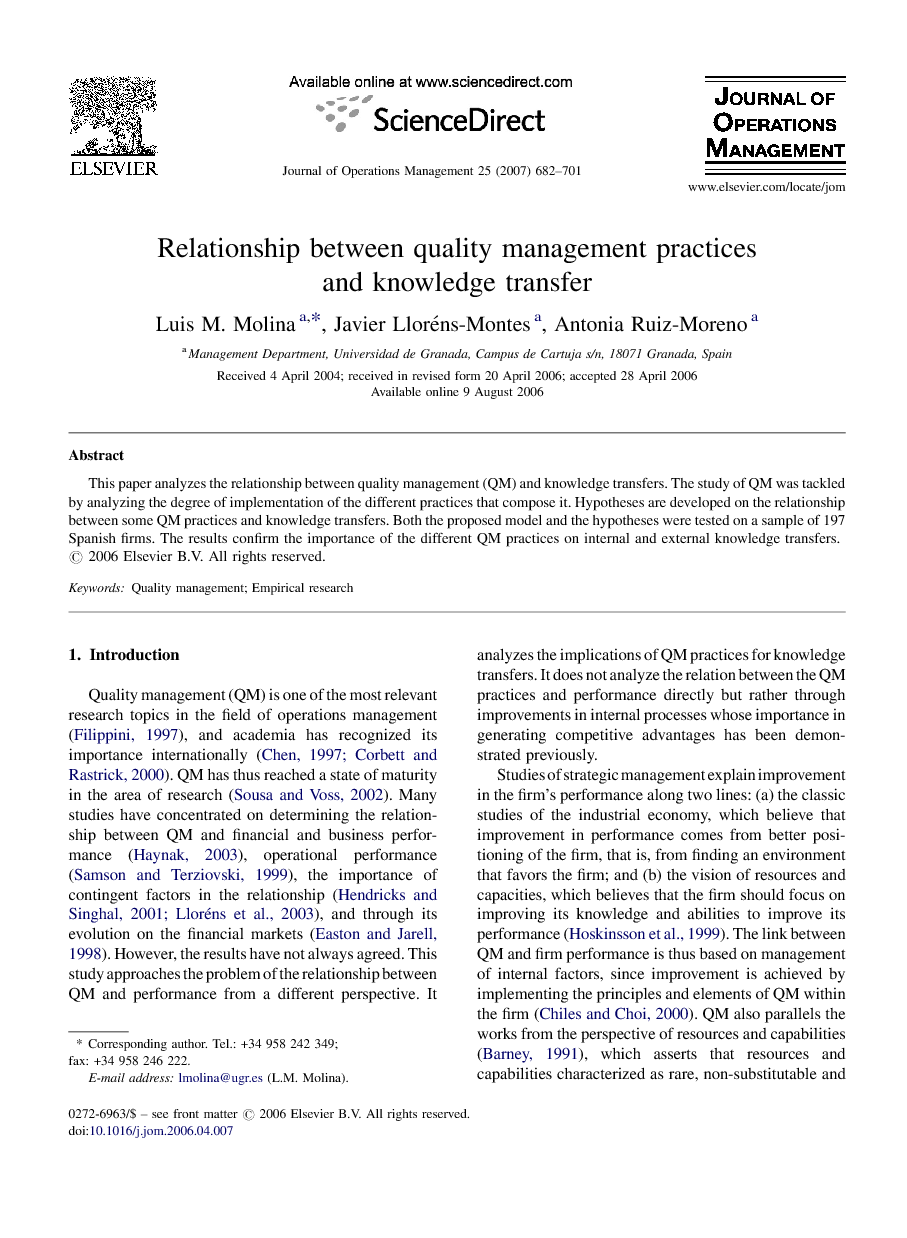 Quality management (QM) is one of the most relevant research topics in the field of operations management (Filippini, 1997), and academia has recognized its importance internationally (Chen, 1997 and Corbett and Rastrick, 2000). QM has thus reached a state of maturity in the area of research (Sousa and Voss, 2002). Many studies have concentrated on determining the relationship between QM and financial and business performance (Haynak, 2003), operational performance (Samson and Terziovski, 1999), the importance of contingent factors in the relationship (Hendricks and Singhal, 2001 and Lloréns et al., 2003), and through its evolution on the financial markets (Easton and Jarell, 1998). However, the results have not always agreed. This study approaches the problem of the relationship between QM and performance from a different perspective. It analyzes the implications of QM practices for knowledge transfers. It does not analyze the relation between the QM practices and performance directly but rather through improvements in internal processes whose importance in generating competitive advantages has been demonstrated previously. Studies of strategic management explain improvement in the firm's performance along two lines: (a) the classic studies of the industrial economy, which believe that improvement in performance comes from better positioning of the firm, that is, from finding an environment that favors the firm; and (b) the vision of resources and capacities, which believes that the firm should focus on improving its knowledge and abilities to improve its performance (Hoskinsson et al., 1999). The link between QM and firm performance is thus based on management of internal factors, since improvement is achieved by implementing the principles and elements of QM within the firm (Chiles and Choi, 2000). QM also parallels the works from the perspective of resources and capabilities (Barney, 1991), which asserts that resources and capabilities characterized as rare, non-substitutable and inimitable (Barney, 1991) determine the obtaining of competitive advantages. To achieve these characteristics, capabilities must be path dependent (Helfat and Peteraf, 2003), enacted ambiguously from the coordinated conduct of the organization's members (Berman et al., 2002). Thus, the firm's capacities that provide a source of competitive advantage are based on the integration of knowledge in the firm so that it can be used in a coordinated way (Grant, 1996a). This genesis is what leads Conner and Prahalad (1996, p. 477) to state that “a resource-based theory of the firm thus entails a knowledge-based perspective”. Within this framework, knowledge transfers and the firm's ability to transfer knowledge are fundamental in explaining some of the basic questions of business management (Cohen and Levinthal, 1990 and Kogut and Zander, 1992). They have thus been considered crucial in questions as basic as the existence or limits of firms. This work, however, is primarily interested in the repercussions for firms’ organizational performance. In this paper, we study the relationship between the implementation of certain QM practices and internal and external knowledge transfers. Our objective is to find foundations in a knowledge-based view that confirm the link between QM implementation and organizational performance. By a knowledge-based view, we mean studies that find knowledge to be a basis for explaining the firm's competitive advantages over its competitors and other systems of economic coordination, such as markets. Thus, the study follows the same line of research as, for example, Reed et al. (2000), who studied QM's capacity to create competitive advantages. In spite of the importance of knowledge management within the firm (Grant, 1996a), few empirical studies examine its relationship with QM. The current study analyzes the influence of QM practices on knowledge transfers, taking into account that the degree to which firms facilitate knowledge transfers has been considered fundamental to explaining the differences in performance between firms. In the next section of this paper, we review the literature on QM and knowledge transfer. We then examine how certain QM practices and knowledge transfers are related and present the hypotheses. In Section 4, we provide a description of the methodology, followed by presentation of the results. Finally, we discuss the implications of the results and conclusions.

In this paper we have studied the relationship between certain QM practices and knowledge transfers. The results indicate that the joint handling of the social and technical aspects of QM implies that we have a set of practices with great impact on knowledge management, especially on knowledge transfers. Cohen (1998) considers that, from the basic perspectives that can be adopted for knowledge management, Western firms have opted for the line of explicit knowledge management and subsequent investment in costly information systems. In its tacit aspect, research has studied which factors determine whether the knowledge is more or less transferable. However, there are few studies on the management elements that will facilitate the transfer. Given the explanatory capacity of the elements mentioned, establishing a socio-technical system according to the principles of QM has proven to be a good system for overcoming these difficulties. Thus, the results provide a theoretical support for the relationship between QM and performance. We can conclude that, since QM has a positive influence on knowledge transfer, it affects the firm's resources and capabilities, as well as the organization's competitive advantage. For future study in this line of research, we believe that the analysis of the influence of implementing QM practices in other knowledge management processes is important. The relation between knowledge creation and QM implementation has been studied before (Liderman et al., 2004), but empirical studies in this field are very few. Even fewer studies analyze the relation between QM and knowledge integration, an issue on which QM practices a priori have a great impact. On the other hand, the lack of significance of QM teamwork in the internal transfers is an unexpected result. Deeper study of this relation to take into account the different kinds of teams in QM and their relation to knowledge transfers is a line of research that would improve understanding of this relationship.