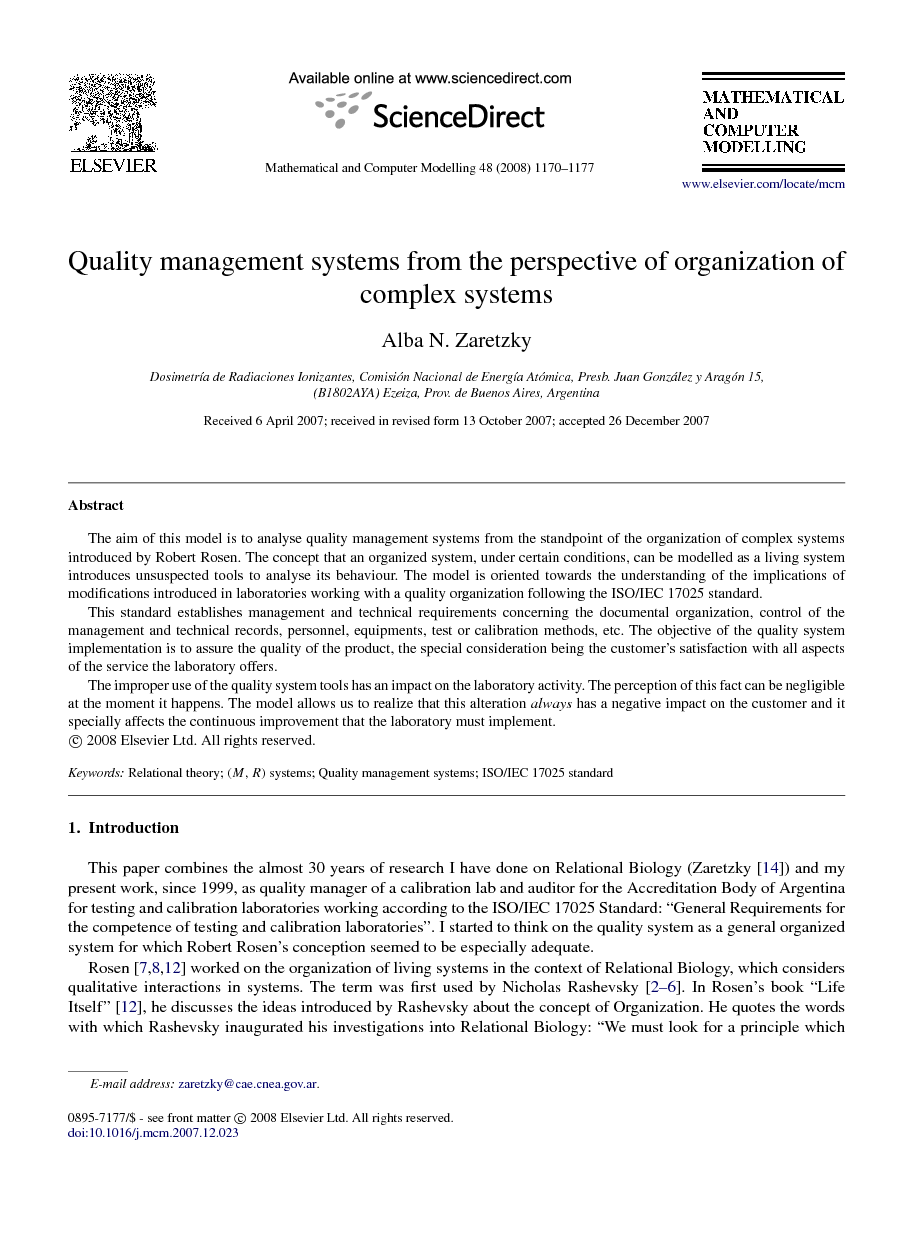 The aim of this model is to analyse quality management systems from the standpoint of the organization of complex systems introduced by Robert Rosen. The concept that an organized system, under certain conditions, can be modelled as a living system introduces unsuspected tools to analyse its behaviour. The model is oriented towards the understanding of the implications of modifications introduced in laboratories working with a quality organization following the ISO/IEC 17025 standard. This standard establishes management and technical requirements concerning the documental organization, control of the management and technical records, personnel, equipments, test or calibration methods, etc. The objective of the quality system implementation is to assure the quality of the product, the special consideration being the customer’s satisfaction with all aspects of the service the laboratory offers. The improper use of the quality system tools has an impact on the laboratory activity. The perception of this fact can be negligible at the moment it happens. The model allows us to realize that this alteration always has a negative impact on the customer and it specially affects the continuous improvement that the laboratory must implement.

This paper combines the almost 30 years of research I have done on Relational Biology (Zaretzky [14]) and my present work, since 1999, as quality manager of a calibration lab and auditor for the Accreditation Body of Argentina for testing and calibration laboratories working according to the ISO/IEC 17025 Standard: “General Requirements for the competence of testing and calibration laboratories”. I started to think on the quality system as a general organized system for which Robert Rosen’s conception seemed to be especially adequate. Rosen [7], [8] and [12] worked on the organization of living systems in the context of Relational Biology, which considers qualitative interactions in systems. The term was first used by Nicholas Rashevsky [2], [3], [4], [5] and [6]. In Rosen’s book “Life Itself” [12], he discusses the ideas introduced by Rashevsky about the concept of Organization. He quotes the words with which Rashevsky inaugurated his investigations into Relational Biology: “We must look for a principle which connects the different physical phenomena involved and expresses the biological unity of the organism and the organic world as a whole”. As Rosen points out in his book, we must look for a principle that governs the way in which physical phenomena are organized, a principle that governs the organization of phenomena, rather than the phenomena themselves. So, organization is precisely what Relational Biology is about. It concerns with qualitative interactions because, in the sense of Nicholas Rashevsky, each functional property in Biology occurs for every level of organization independently of the subjacent physico-chemical machinery. When we want to know how a system works, and not only biological systems, we need to describe the relationships among its parts. The way to do that must be simple and should not depend on the great variability existing among “individuals”. The first approximation to the description must then be done through qualitative relations. Rosen starts defining the concept of function. If there is a system that is heterogeneous, that is, one part looks different or behaves different from another part and one of these parts is removed or changed, what would be the effect on the behaviour of the system? He says that any discrepancy between both behaviours defines the function of the removed or changed part. Any part of a system that can be assigned a function in this sense is then a component of the system. This idea of component provides a unit of organization. Any system is then organized to the extent that it can be analysed into or built out of constituent components. Rosen says that the characteristic relationships between such constituent components, and between the components and the system as a whole comprise a new and different approach to science itself, which he called “the relational theory of systems”. In fact, a component must be endowed with the following properties: (i) it must posses enough “identity” to be considered a thing in itself and (ii) there must be enough room for it to acquire properties from larger systems to which it may belong. Rosen worked in Biology with (M,R)(M,R) systems, that is metabolism — repair systems. I will introduce the concept and formalism in order to make clear its generalization to other systems. An antecedent of this different use can be seen in Hong [1], but Rosen himself emphasized that the arguments were valid for general systems, though his main interest was Biology. Moreover, as Zamenopoulos and Alexion [13] say, Rosen’s concern was not only Biology. That is more evident in relation with his theory of anticipatory systems. For example, they say, “Rosen’s examination of anticipatory systems [11] with its associated premises has not only been an inspiration for the study of biological worlds, but also for the scientific enquiry, understanding, modelling and control of complex systems in general”. And they add “For him (Rosen) the idea of building and employing predictive models was also a fundamental aspect of science in general, perceived as a means to construct homologies between modes of social and biological organization and sustain a general theory of planning, policy generation and decision making”. The paper of Hong Li highly clarifies the relevance of the relational model that he applies to enterprise development. It is an important antecedent for the present paper. The metabolic system MM was conceived as a system consisting of components, which have inputs and outputs. A component transforms a set of input materials into a set of output materials. The simplest such system may be seen in Fig. 1.

The paper has introduced the concept of living organism in the context of the relational theory of systems to represent a quality system implemented in a test or calibration lab. This representation allowed using mathematical tools developed for the representation of general relational systems. The organization and behaviour of the system were analysed through this representation. One of the main consequences of the utilization of the model is that though the laboratory may not be able to detect the impact deviations in the system may have on the customer, this impact exists and it is a negative one. Besides, it gives a justification for the importance of having a quality management system, because through the model introduced in this paper it becomes clear that if changes are not planned in advance, this fact not only affects the activity but all the relationships involving the technical work and the customer.