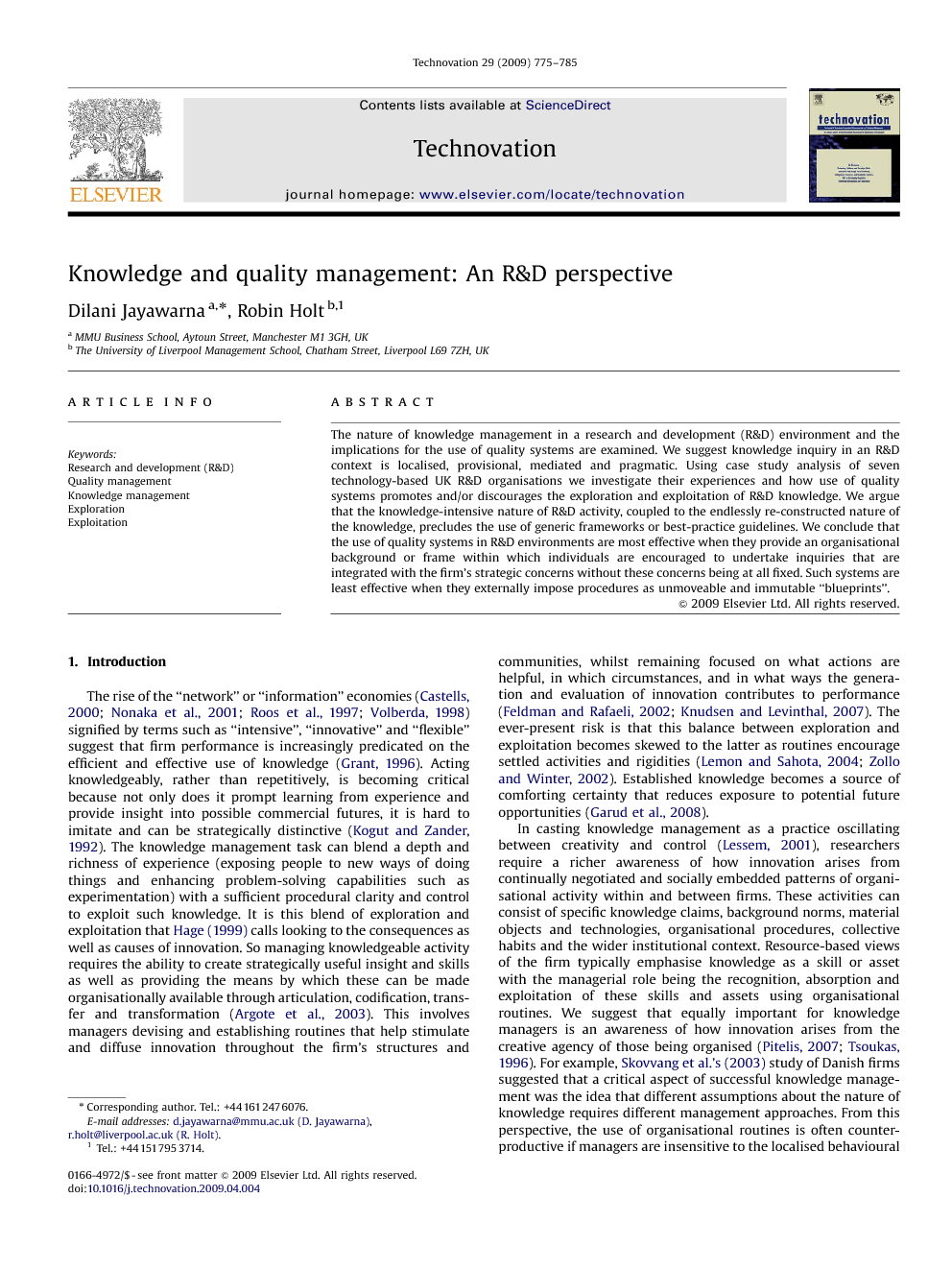 The nature of knowledge management in a research and development (R&D) environment and the implications for the use of quality systems are examined. We suggest knowledge inquiry in an R&D context is localised, provisional, mediated and pragmatic. Using case study analysis of seven technology-based UK R&D organisations we investigate their experiences and how use of quality systems promotes and/or discourages the exploration and exploitation of R&D knowledge. We argue that the knowledge-intensive nature of R&D activity, coupled to the endlessly re-constructed nature of the knowledge, precludes the use of generic frameworks or best-practice guidelines. We conclude that the use of quality systems in R&D environments are most effective when they provide an organisational background or frame within which individuals are encouraged to undertake inquiries that are integrated with the firm's strategic concerns without these concerns being at all fixed. Such systems are least effective when they externally impose procedures as unmoveable and immutable “blueprints”.

This research has identified a number of quality management practices that support or discourage the knowledge creation and transformation processes within an R&D context. Previous empirical research has established the importance of effective utilisation of quality management within R&D. However, there are reservations about the successful use of quality systems in R&D due to the inherent tacitness, complexity and consequent causal ambiguity of the activity (Choo et al., 2007; Prajogo and Hong, 2008). In the current literature there was very little empirical evidence related to the contribution quality systems make to the exploration and exploitation of R&D knowledge. We began by discussing the importance of knowledge exploration and exploitation, and how quality systems help integrate insight, procedures and firm performance. We argued that R&D activity was a particularly interesting activity in this respect given the emphasis on innovation rather than repetitive manufacturing. Using work by Rheinberger (1997), we suggested R&D was characterized much like a scientific laboratory. There was an established set of procedures, skills and norms that made up the technical knowledge by which R&D employees searched for illusive but potentially innovatory knowledge which following Rheinberger we termed epistemic. To make epistemic knowledge strategically relevant by ensuring it contributes to wider firm performance any quality system should attend to the manner in which the creation of innovatory knowledge and the potential for using that knowledge is located, provisional, communicated and pragmatic. Using case data from seven R&D departments of large firms we found the experience of using quality systems to be varied. The routines associated with epistemic exploration and the development of technical skills to explore and exploit knowledge were not easily reduced to a “body” or “set” of generally applicable structures. A number of reasons for and against using quality systems in R&D emerged from the data analysis and these were summarised using the four-fold typology of knowledge in Table 3.In addition to its theoretical contribution to knowledge management and quality management literature, this paper offers several implications for those responsible for managing knowledge in R&D. Perhaps the most successful aspect of using quality systems in R&D inquiry was in assisting communication; it acted as a “talking cure”. R&D managers found that quality systems enabled them to better understand the expectations of customers. In turn, the systems enabled the R&D department and the firm itself to demonstrate commitment and reputation to their customers. Communicative benefits were also experienced in terms of more efficient patent application and a greater awareness of product liability issues. Related to these benefits of communication the attested benefits of engaging with customers come as stakeholders. Experiences such as the effective utilisation of customer feedback, pro-active strategies to meet changing customer requirements, effective handling of customer inquiry, and making the compliance status visible to customers are all attributed to the adoption of quality systems. On the down side, communication was felt to be hampered by the often confusing and complex procedural systems that required a new and abstract language. In terms of the nature of knowledge being experienced, it was largely of a technical nature, involving the skills and procedures by which R&D activity was conducted, and the results translated back into the firm. The bureaucratic overload was experienced as an imposition of technical knowledge from a different context, creating an “us and them” feeling across departments and localities. Although it allowed employees and others from different locales to formally become aware of one anothers’ language, the attempt to bring this about by the use of a common language proved only partially successful (Yang, 2008). Analysis of where technical problems were emerging became possible (which points in the system), but less was known as to why they existed because the language was target driven rather than analytical. Here, again, the “knowledge” was largely technical, rooted in attempts to better clarify roles, streamline information flows and isolate responsibility. This systematic clarity did assist firms in part to integrate R&D activities with wider firm concerns. Those not possessing ISO quality accreditation cited the very lack of process discipline and commonly understood procedural frameworks as a cause of re-work, project variation and a failure to make effective use of their good practice knowledge. Yet these firms were also typically the ones willing to allow the R&D departments a degree of latitude in designing quality procedures that were then accounted for by their users. Frustrated managers were typically those working with systems that imposed pre-given “solutions” taken from elsewhere. In this pragmatic vein, the experience of inquiry more generally was brought to the fore with a concern for how epistemic knowledge generated by research activity might potentially be exploited in strategically relevant ways. Perhaps the most resistance to quality systems came from the recognition of the contested quality of knowledge. Here the emphasis was on the epistemic nature of what was being produced, the potential behind new insights, and how this potential was limited by attempts to impose strict target conformity. What was valued about quality systems was the manner in which they could be used to facilitate a sense of collective endeavour when undertaking knowledge exploration rather than stipulate particular targets. More generally, we found that where quality systems were used in an R&D context they were more successful when users were minded of the nature of inquiry. We have conceptualised the nature of this inquiry as the developing skills to conduct searches for epistemic knowledge (exploration) as well as the procedures to embed the resulting innovation in strategically relevant ways. It is when quality systems err toward the technical conception of knowledge as something that is fixed rather than, in addition, being something contested and epistemic, that they run the risk of failure. Understanding the ways in which knowledge was localised, provisional, communicated and pragmatically focussed assists in such recognition. Certainly many of the R&D managers felt without the ability to create bespoke systems there was a deadening effect on the capacity to explore and in some cases even exploit knowledge.