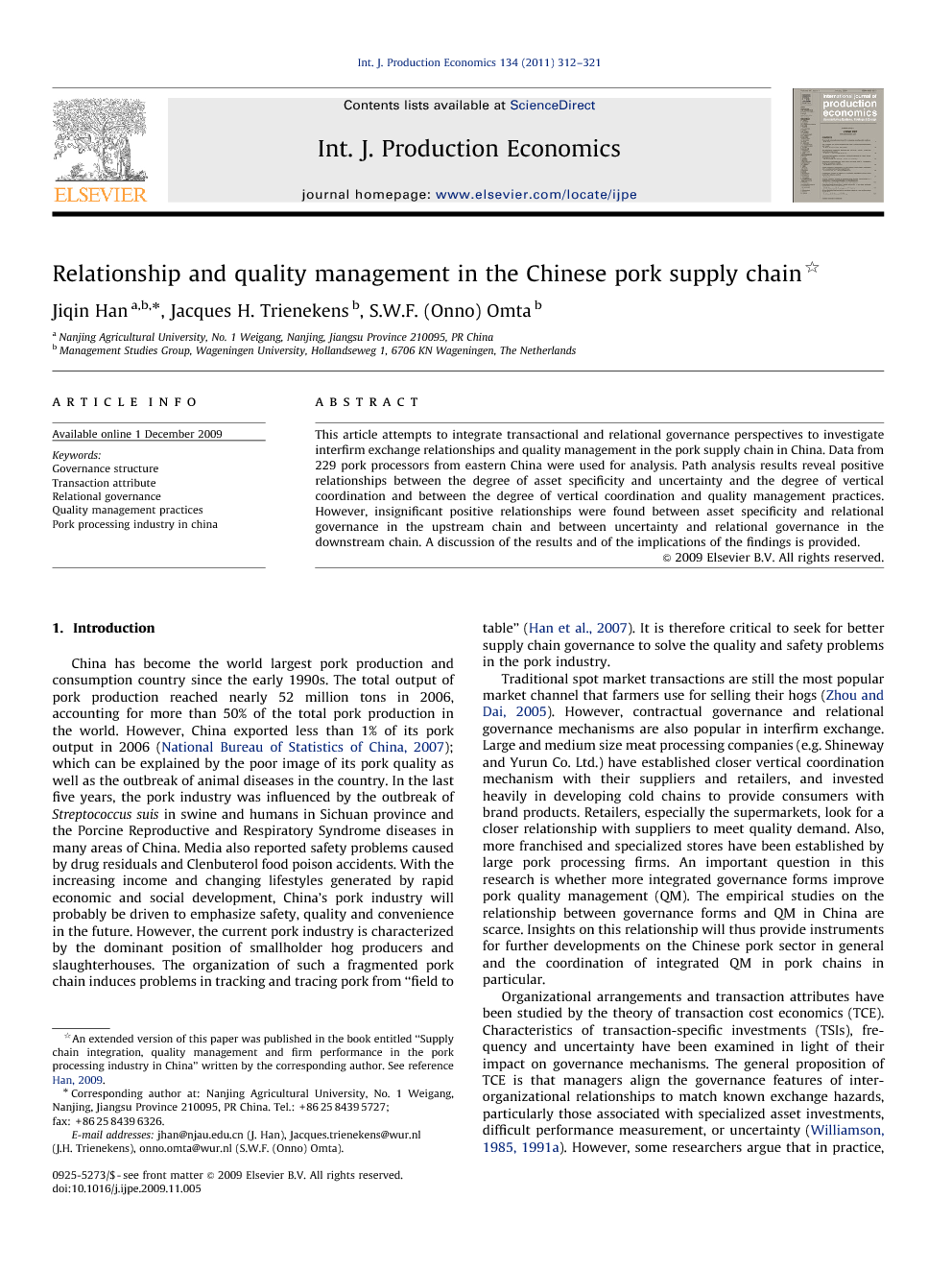 This article attempts to integrate transactional and relational governance perspectives to investigate interfirm exchange relationships and quality management in the pork supply chain in China. Data from 229 pork processors from eastern China were used for analysis. Path analysis results reveal positive relationships between the degree of asset specificity and uncertainty and the degree of vertical coordination and between the degree of vertical coordination and quality management practices. However, insignificant positive relationships were found between asset specificity and relational governance in the upstream chain and between uncertainty and relational governance in the downstream chain. A discussion of the results and of the implications of the findings is provided.

China has become the world largest pork production and consumption country since the early 1990s. The total output of pork production reached nearly 52 million tons in 2006, accounting for more than 50% of the total pork production in the world. However, China exported less than 1% of its pork output in 2006 (National Bureau of Statistics of China, 2007); which can be explained by the poor image of its pork quality as well as the outbreak of animal diseases in the country. In the last five years, the pork industry was influenced by the outbreak of Streptococcus suis in swine and humans in Sichuan province and the Porcine Reproductive and Respiratory Syndrome diseases in many areas of China. Media also reported safety problems caused by drug residuals and Clenbuterol food poison accidents. With the increasing income and changing lifestyles generated by rapid economic and social development, China's pork industry will probably be driven to emphasize safety, quality and convenience in the future. However, the current pork industry is characterized by the dominant position of smallholder hog producers and slaughterhouses. The organization of such a fragmented pork chain induces problems in tracking and tracing pork from “field to table” (Han et al., 2007). It is therefore critical to seek for better supply chain governance to solve the quality and safety problems in the pork industry. Traditional spot market transactions are still the most popular market channel that farmers use for selling their hogs (Zhou and Dai, 2005). However, contractual governance and relational governance mechanisms are also popular in interfirm exchange. Large and medium size meat processing companies (e.g. Shineway and Yurun Co. Ltd.) have established closer vertical coordination mechanism with their suppliers and retailers, and invested heavily in developing cold chains to provide consumers with brand products. Retailers, especially the supermarkets, look for a closer relationship with suppliers to meet quality demand. Also, more franchised and specialized stores have been established by large pork processing firms. An important question in this research is whether more integrated governance forms improve pork quality management (QM). The empirical studies on the relationship between governance forms and QM in China are scarce. Insights on this relationship will thus provide instruments for further developments on the Chinese pork sector in general and the coordination of integrated QM in pork chains in particular. Organizational arrangements and transaction attributes have been studied by the theory of transaction cost economics (TCE). Characteristics of transaction-specific investments (TSIs), frequency and uncertainty have been examined in light of their impact on governance mechanisms. The general proposition of TCE is that managers align the governance features of interorganizational relationships to match known exchange hazards, particularly those associated with specialized asset investments, difficult performance measurement, or uncertainty (Williamson, 1985 and Williamson, 1991a). However, some researchers argue that in practice, given that TSIs are necessary, many transactions exist outside the realm of vertical integration or contracts (Bensaou and Anderson, 1999). They postulate that one possible reason for this is that relationships based on trust make vertical integration less important to protect TSIs. An ongoing relationship generally fosters trust and enables partners to adopt more flexible models of cooperation (such as alliances), create value together (that is, mutual benefits or reciprocity), and eventually, induce exchange partners to make TSIs (Yu et al., 2006). This is the major view of relational exchange theory (RET, MacNeil, 1978). Though in the last decade, studies have been done to investigate interfirm exchange relationships using both TCE and RET (e.g. Yu et al., 2006; Zhou et al., 2008), empirical evidence informing this issue in the Chinese context is scarce and mixed (Zhou et al., 2008). Furthermore, while the impact of transaction attributes on governance mechanisms has been devoted significant attention, there is a lack of a comprehensive framework to explain the alignment of governance mechanisms in the presence of transaction characteristics in the pork supply chain from both transactional and relational perspectives. Therefore, one of the purposes of this study is to develop a framework that integrates TCE and RET to explain the impact of transaction attributes on governance mechanisms in the context of the pork processing industry. In addition to this, the trade-off between formal contracts and relational governance mechanisms will also be examined. The layout of the paper is as follows: the next section introduces the theoretical framework and the relationships among the research constructs. The research design is then described and the empirical results are presented in 3 and 4, respectively. Section 5 draws conclusions and presents some discussion. Finally, the chapter concludes with implications for the managers of pork processing firms in China, limitations of the study and recommendations for future research.