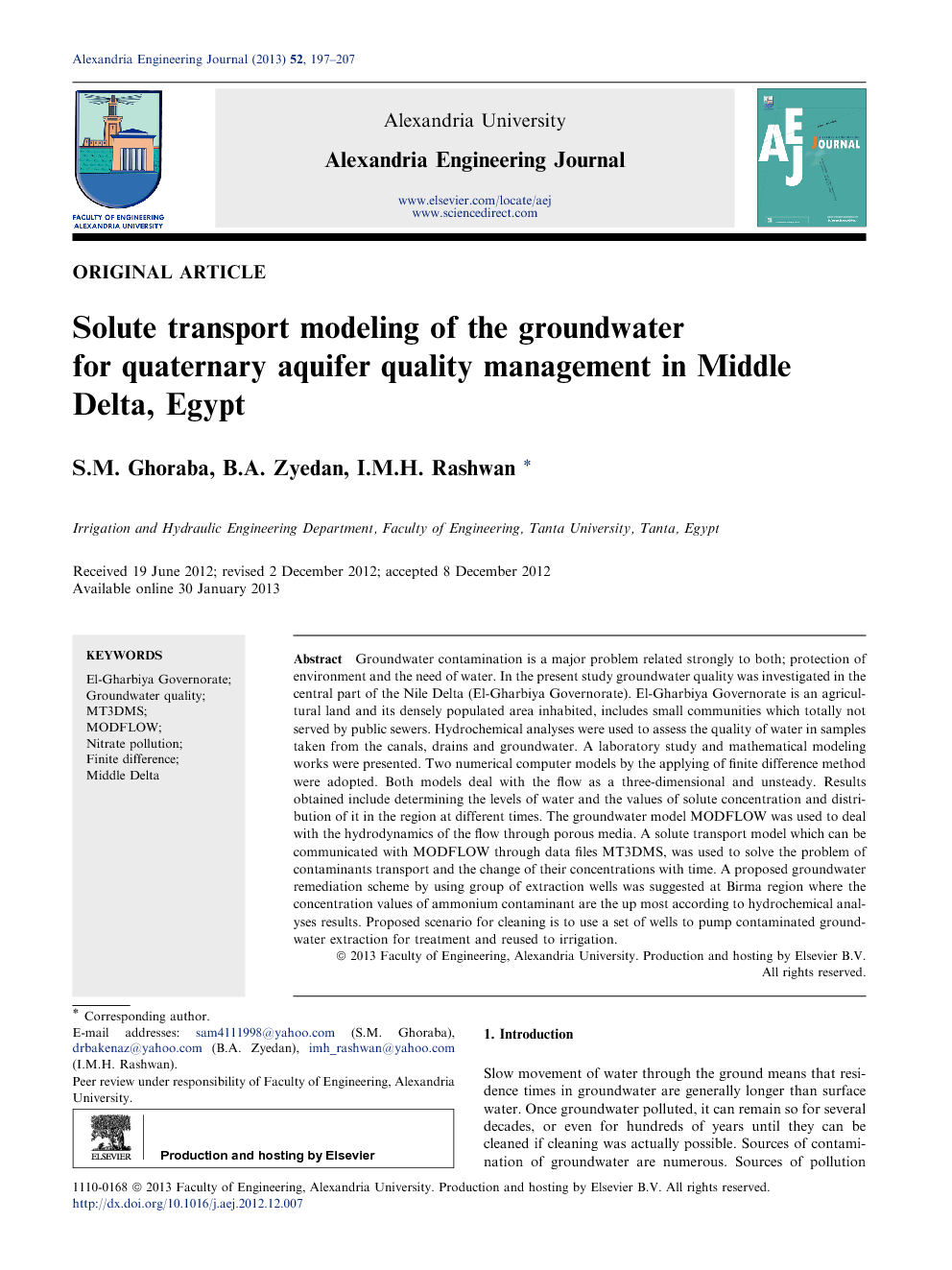 Groundwater contamination is a major problem related strongly to both; protection of environment and the need of water. In the present study groundwater quality was investigated in the central part of the Nile Delta (El-Gharbiya Governorate). El-Gharbiya Governorate is an agricultural land and its densely populated area inhabited, includes small communities which totally not served by public sewers. Hydrochemical analyses were used to assess the quality of water in samples taken from the canals, drains and groundwater. A laboratory study and mathematical modeling works were presented. Two numerical computer models by the applying of finite difference method were adopted. Both models deal with the flow as a three-dimensional and unsteady. Results obtained include determining the levels of water and the values of solute concentration and distribution of it in the region at different times. The groundwater model MODFLOW was used to deal with the hydrodynamics of the flow through porous media. A solute transport model which can be communicated with MODFLOW through data files MT3DMS, was used to solve the problem of contaminants transport and the change of their concentrations with time. A proposed groundwater remediation scheme by using group of extraction wells was suggested at Birma region where the concentration values of ammonium contaminant are the up most according to hydrochemical analyses results. Proposed scenario for cleaning is to use a set of wells to pump contaminated groundwater extraction for treatment and reused to irrigation.

Slow movement of water through the ground means that residence times in groundwater are generally longer than surface water. Once groundwater polluted, it can remain so for several decades, or even for hundreds of years until they can be cleaned if cleaning was actually possible. Sources of contamination of groundwater are numerous. Sources of pollution from human activities can be distinguished as domestic, agriculture and industrial. 1.1. Modeling of groundwater Groundwater modeling consists of physical modeling and mathematical modeling. Physical modeling can be classified to Hele-shaw, sand tanks and electric analog models. Mathematical modeling can be classified to analytical and numerical models. Details of these models were presented by Harr [12]. The numerical techniques used the finite difference methods (FDMs), the finite element method (FEM) and boundary element method (BEM). Comprehensive treatments of the applications of these numerical methods to groundwater problems were presented by Remson [18] and Wang and Anderson [26]. Based on the integrated finite difference method Nararimhan and Witherspoon [16] were developed a general model for both two and three dimensions groundwater flow. Shuluma [24] demonstrated applications for models in both two and three dimensions groundwater flow based on finite element method. Khalifa [13] used a three dimensions finite difference model (MODFLOW) in obtaining future piezometric head levels and the total volumetric water budget for Siwa Oasis. Bayer et al. [2] described how to source control with pumping wells located within the source zone. They concluded that down gradient plume control requires much lower pumping rates and is preferable for long-term control of a groundwater contamination. Bayer and Finkel [3] presented a comparison between pump-and treat and funnel-and-gate systems, as typical active and passive groundwater remediation technologies. Schalk et al. [21] proposed a modeling framework that takes advantage of the vast availability of measurement data in controlled water systems. The framework was successfully applied to improve a simulation model of the controlled water system of Rijnland, Netherlands. The suggestion water-system control model is more reliable for both design studies and operational decision support. Hamid et al. [11] presented a comprehensive evaluation of different finite difference schemes for the solution of head-based and mixed forms of the Richard’s equation. He investigated the effects of various approximations of moisture capacity function, convergence criteria, and time stepping methods on the performance of the schemes. There results showed significant influences on mass balance, number of iterations, and convergence condition of the numerical schemes. 1.2. Modeling of contaminant transport in groundwater The numerical methods commonly used to solve the problems of the transition can be classified as characteristics, random walk, Eulerian–Lagragian and adaptive grid methods. The suitability of a groundwater for irrigation is contingent upon the effects of the mineral constituents of the water on both the plant and the soil [29]. In specifying the quality characteristics of water, complete statement requires chemical, physical, sanitary and biological analysis [25]. Most drinking water supplies in accordance with the standard set by the World Health Organization [28]. Bear [4] and [5] used the basic equations of contaminant transport in groundwater. Abdel-Salam [1] was applied a finite element solute transport model (CSU/GWTRAN) to a vertical cross section in the Nile Valley of Egypt. Domenco and Schwartz [8] demonstrated the theoretical basis for the equation describing solute transport, which provide a conceptual framework for analyzing and modeling physical solute transport processes in groundwater. Shaltout (1999) studied the problem of contamination of groundwater by waste water. The study included a combination of field, laboratory and mathematical modeling works on a chosen area within Greater Cairo, Egypt. Kolditz et al. [14] examined variable density flow and corresponding solute transport in groundwater. Farid [9] presented study to provide guidelines to the Egyption government for improving environmental protection, concerning groundwater in the Tenth of Ramadan city. Dawoud [6] developed numerical simulation for transport of reactive multi-chemical components in groundwater. William [30] used GIS system to analyze, interpret and manage the quality of groundwater and characterize the most vulnerable locations for contamination along the groundwater flow path between the capital Amman and Zarqa area in Jordon. Wang et al. [27] presented numerical solution for governing equations describing advective–dispersive transport with multi rate mass transfer between mobile and immobile domains. Mohrlok et al. [15] made analysis of experimental tracer transport in three-dimensional flow field for groundwater and subsurface remediation at University of Stuttgart, Germany. A numerical model has been built up and simulation has been carried out for flow and transport processes. Experimental and simulated breakthrough curves were compared and the influence of aquifer heterogeneity on the transport has been brought out. Dilip et al. [7] obtained the Laplace transform technique and analytical solutions for two-dimensional advection–diffusion equations describing the dispersion of pulse-type point source along temporally and spatially dependent flow domains, respectively, through a semi-infinite horizontal isotropic medium. Sharief et al. [23] found that for remediation of dissolved phase contaminants in groundwater, a pump-and-treat method to be successful remediation technique. They concluded that, developing an efficient and robust design to solve groundwater pollution remediation problems using a pump-and-treat method is very important because of the large construction and operating costs involved. They made an attempt to develop a coupled simulation–optimization model based on the finite-element method and an evolutionary approach of an elitist genetic algorithm (EGA) for the optimal design of groundwater remediation by pump and treat. The simulation–optimization model was used to optimize the remediation of a large-field unconfined aquifer polluted with total dissolved solids (TDSs) to obtain optimal pumping rates. The main objective of the present study is to investigate groundwater quality in the central part of the Nile Delta (El-Gharbiya Governorate). A combination study of laboratory and mathematical modeling works will be presented. The groundwater model MODFLOW will be used to deal with the hydrodynamics of the flow through porous media. A solute transport model which can be communicated with MODFLOW through data files MT3DMS, will be used to solve the problem of contaminants transport and the change of their concentration with time. Scenario proposed to clean up is to use a set of wells to pump contaminated groundwater extraction of groundwater for treatment.

The Quaternary aquifer in the studied area is quite vulnerable to pollution. Deterioration of groundwater indicates clearly that the human activities caused serious pollution problems. As results of chemical analysis, the nitrate concentrations have clear mount within the area except the north eastern part of the studied area. Ammonium concentrations of groundwater reached an alarming level and exceeded the drinking water standards (0.5 mg/L). The high concentrations are around Birma village at the central part of the studied area and at the north eastern region with concentration gradient increases toward the north boundary outside the area of study. The potential sources of nitrogen compound pollution are: water from sewage treatment plant used for irrigation, sludge and animal manure, septic tanks, soil nitrogen and artificial fertilizers. Two software programs were used for solving numerically the three dimensional models by applying the finite difference method. A management scenario is suggested to clean up the Birma region. The remediation scheme assumes dewatering system through eight extraction wells to pump the contaminated groundwater out of the aquifer for treatment. The locations of wells were chosen toward the flow direction of contaminant. The scenario is successful application in the clean up the Birma region from contamination.