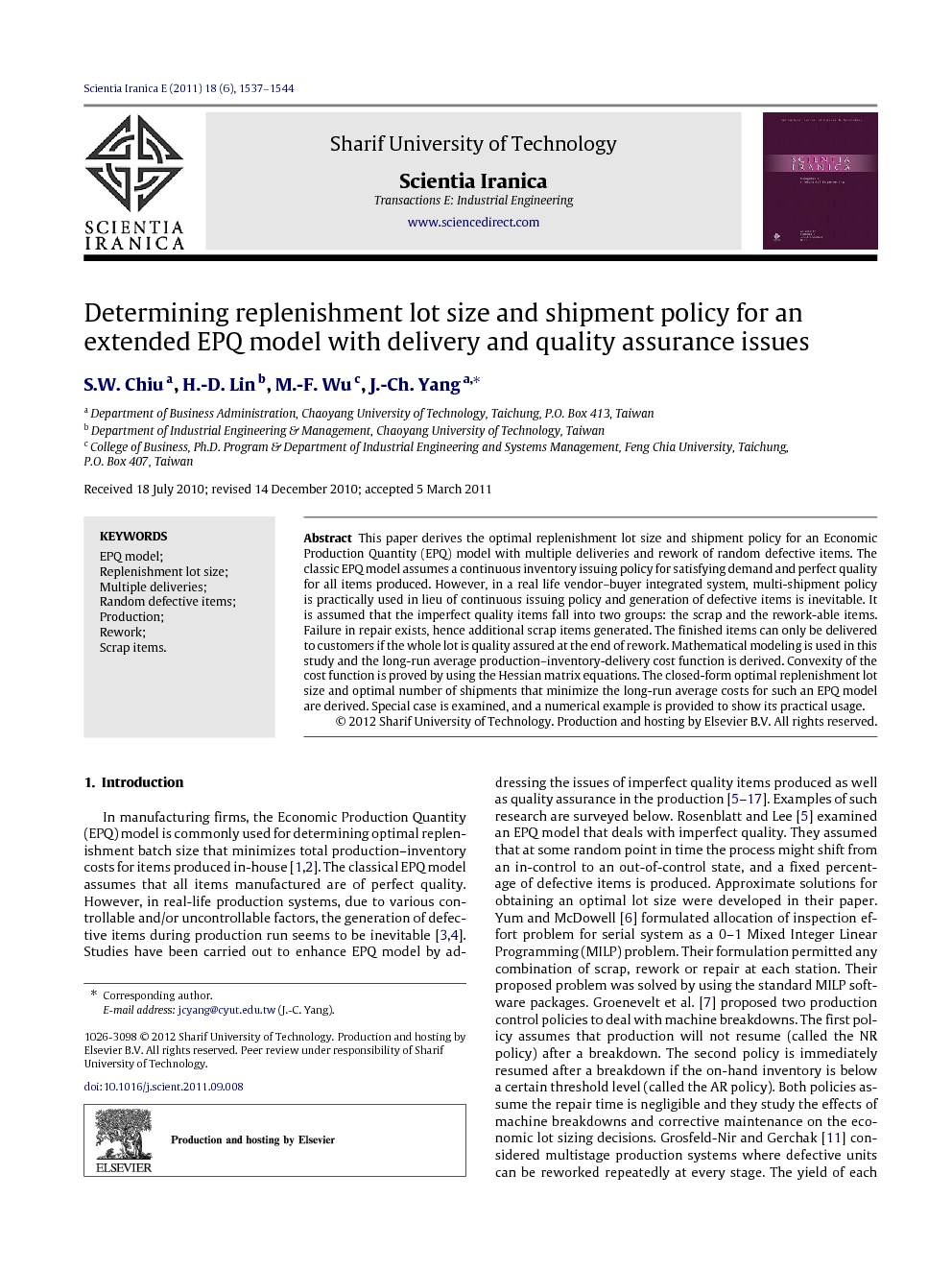 This paper derives the optimal replenishment lot size and shipment policy for an Economic Production Quantity (EPQ) model with multiple deliveries and rework of random defective items. The classic EPQ model assumes a continuous inventory issuing policy for satisfying demand and perfect quality for all items produced. However, in a real life vendor–buyer integrated system, multi-shipment policy is practically used in lieu of continuous issuing policy and generation of defective items is inevitable. It is assumed that the imperfect quality items fall into two groups: the scrap and the rework-able items. Failure in repair exists, hence additional scrap items generated. The finished items can only be delivered to customers if the whole lot is quality assured at the end of rework. Mathematical modeling is used in this study and the long-run average production–inventory-delivery cost function is derived. Convexity of the cost function is proved by using the Hessian matrix equations. The closed-form optimal replenishment lot size and optimal number of shipments that minimize the long-run average costs for such an EPQ model are derived. Special case is examined, and a numerical example is provided to show its practical usage.

In manufacturing firms, the Economic Production Quantity (EPQ) model is commonly used for determining optimal replenishment batch size that minimizes total production–inventory costs for items produced in-house [1] and [2]. The classical EPQ model assumes that all items manufactured are of perfect quality. However, in real-life production systems, due to various controllable and/or uncontrollable factors, the generation of defective items during production run seems to be inevitable [3] and [4]. Studies have been carried out to enhance EPQ model by addressing the issues of imperfect quality items produced as well as quality assurance in the production [5], [6], [7], [8], [9], [10], [11], [12], [13], [14], [15], [16] and [17]. Examples of such research are surveyed below. Rosenblatt and Lee [5] examined an EPQ model that deals with imperfect quality. They assumed that at some random point in time the process might shift from an in-control to an out-of-control state, and a fixed percentage of defective items is produced. Approximate solutions for obtaining an optimal lot size were developed in their paper. Yum and McDowell [6] formulated allocation of inspection effort problem for serial system as a 0–1 Mixed Integer Linear Programming (MILP) problem. Their formulation permitted any combination of scrap, rework or repair at each station. Their proposed problem was solved by using the standard MILP software packages. Groenevelt et al. [7] proposed two production control policies to deal with machine breakdowns. The first policy assumes that production will not resume (called the NR policy) after a breakdown. The second policy is immediately resumed after a breakdown if the on-hand inventory is below a certain threshold level (called the AR policy). Both policies assume the repair time is negligible and they study the effects of machine breakdowns and corrective maintenance on the economic lot sizing decisions. Grosfeld-Nir and Gerchak [11] considered multistage production systems where defective units can be reworked repeatedly at every stage. The yield of each stage is uncertain, so several production runs may need to be attempted until the quantity of finished products is sufficient. The trade-off at each stage is between using small lots, possibly necessitating repeated rework set-ups and large lots, which may result in costly overproduction. They showed that a multistage system, where only one of the stages requires a set-up, can be reduced to a single-stage system. They also proved that it is best to make the “bottle-neck” the first stage of the system, and they also developed recursive algorithms for solving two- and three-stage systems, where all stages require set-ups, optimally. Chiu et al. [14] examined an EPQ model with imperfect rework and random breakdown under abort/resume policy. They employed mathematical modeling, and derived the integrated long-run average production–inventory cost per unit time. Bounds for the optimal production run times are proposed and proved in their study. A recursive searching algorithm was developed for locating the optimal run time within the bounds that minimizes the expected production–inventory costs. The “continuous” inventory issuing policy for satisfying product demand is another unrealistic assumption of EPQ model. In real life, vendor–buyer integrated production–inventory–delivery system, multiple or periodic shipments of finished products are often used. Goyal [18] first studied the integrated inventory model for a single supplier-single customer problem. He proposed a method that is typically applicable to those inventory problems where a product is procured by a single customer from a single supplier. He gave example to illustrate his proposed method. Many studies have since been carried out to address various aspects of vendor–buyer supply chain optimization issues [19], [20], [21], [22], [23], [24], [25], [26] and [27]. Golhar and Sarker [20] developed a simple algorithm to compute the optimal batch size for a system where a Just-In-Time (JIT) buyer demands frequent deliveries of small lots of certain products. They found that the generalized total cost function for the proposed model is a piecewise convex function. When production uptime and cycle time are each equal to an integer multiple of the shipment interval, a perfect matching of shipment size occurs, and for such a situation, the generalized model specializes to more traditional inventory models. Economic impact of ordering and setup costs reduction is also investigated. Hill [22] studied a model in which a manufacturing company purchases a raw material, manufactures a product and ships a fixed quantity of the product to a single customer at fixed and regular intervals of time. His objective is to determine a purchasing and production schedule which minimizes total cost of purchasing, manufacturing and stock-holding. Viswanathan [23] examined the integrated vendor–buyer inventory models with two different strategies: 1. Each replenishing quantity delivered to the buyer is identical. 2. At each delivery, all the inventory available with the vendor is supplied to the buyer. As a result, there is no one strategy that obtains the best solution for all possible problem parameters. He also provided results of a detailed numerical investigation that analyzed the relative performance of the two strategies for various problem parameters. Diponegoro and Sarker [26] determined an ordering policy for raw materials, as well as an economic batch size for finished products that are delivered to customers frequently at a fixed interval of time for a finite planning horizon. The problem was then extended to compensate for the lost sales of finished products. A closed-form solution to the problem was obtained for the minimal total cost. They also developed a lower bound on the optimal solution for problem, with lost sale. Because little attention has been paid to the investigation of joint effect of multiple deliveries and quality assurance issues on the optimal replenishment lot size and shipment policy of the EPQ model, this paper intends to bridge the gap.

Classic EPQ model assumes a continuous inventory issuing policy for satisfying product demand and a perfect quality production for all items produced during the production process. However, in real-life vendor–buyer integrated production–delivery system, the discontinuous issuing policy is often used, and generation of nonconforming items during a production run is inevitable. This paper investigates the afore-mentioned issues by incorporating a multiple delivery policy and the quality assurance into EPQ with rework and failure in repair. Mathematical modeling is employed here, and the long-run average production–inventory–delivery cost function is derived and proved to be convex. The closed-form solutions in terms of optimal replenishment lot size and optimal number of shipments to the problem are obtained. It may be noted that without an in-depth investigation and robust analysis of such a realistic system, the optimal production-shipment policies cannot be revealed. For future study, interesting topics may be included to examine the effects on the same decisions when shortage with backlogging, or a deviation (e.g. seasonal) of shipment rate to customers are under consideration. Some practical case studies can also be expected to show the effectiveness of the research results.