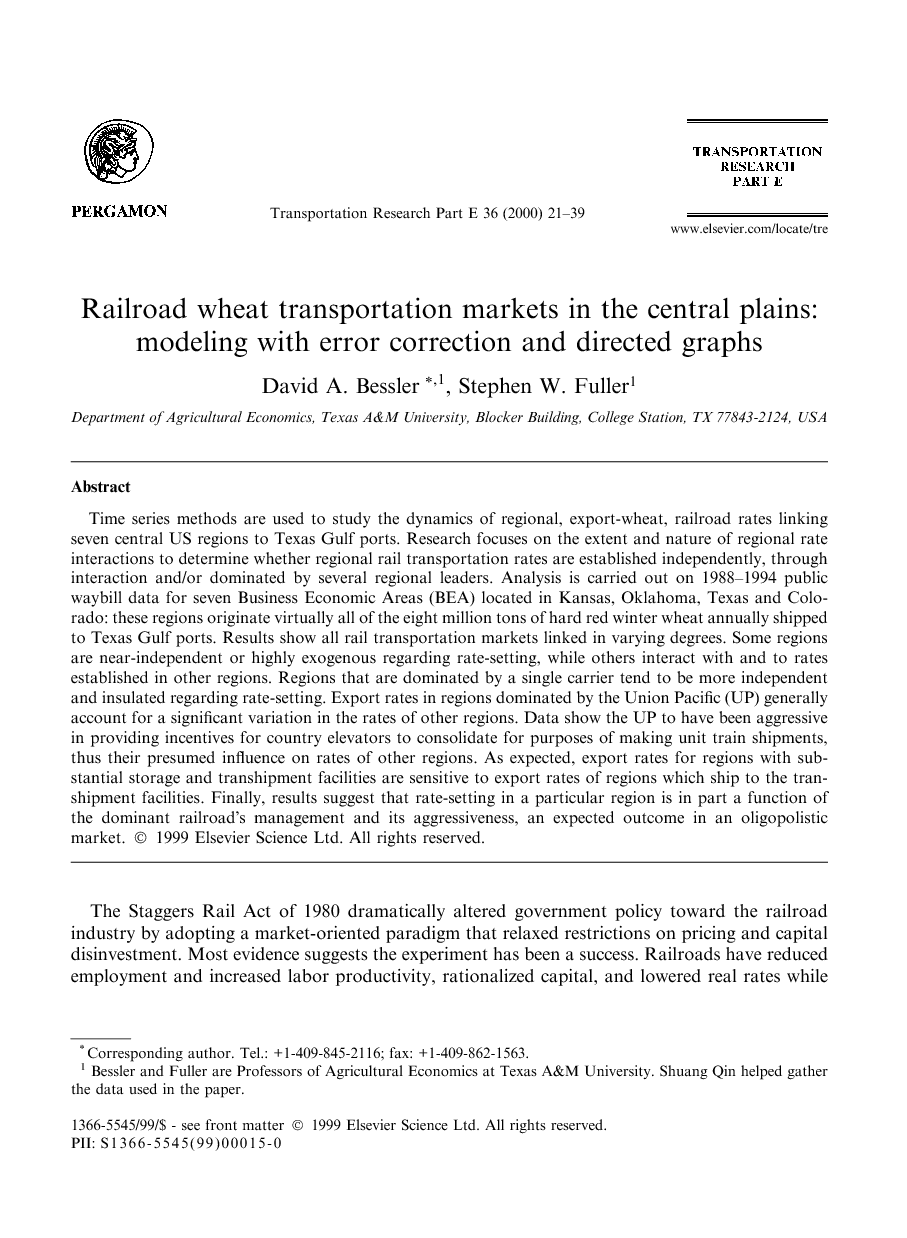 Time series methods are used to study the dynamics of regional, export-wheat, railroad rates linking seven central US regions to Texas Gulf ports. Research focuses on the extent and nature of regional rate interactions to determine whether regional rail transportation rates are established independently, through interaction and/or dominated by several regional leaders. Analysis is carried out on 1988–1994 public waybill data for seven Business Economic Areas (BEA) located in Kansas, Oklahoma, Texas and Colorado: these regions originate virtually all of the eight million tons of hard red winter wheat annually shipped to Texas Gulf ports. Results show all rail transportation markets linked in varying degrees. Some regions are near-independent or highly exogenous regarding rate-setting, while others interact with and to rates established in other regions. Regions that are dominated by a single carrier tend to be more independent and insulated regarding rate-setting. Export rates in regions dominated by the Union Pacific (UP) generally account for a significant variation in the rates of other regions. Data show the UP to have been aggressive in providing incentives for country elevators to consolidate for purposes of making unit train shipments, thus their presumed influence on rates of other regions. As expected, export rates for regions with substantial storage and transhipment facilities are sensitive to export rates of regions which ship to the transhipment facilities. Finally, results suggest that rate-setting in a particular region is in part a function of the dominant railroad’s management and its aggressiveness, an expected outcome in an oligopolistic market. The Staggers Rail Act of 1980 dramatically altered government policy toward the railroad industry by adopting a market-oriented paradigm that relaxed restrictions on pricing and capital disinvestment. Most evidence suggests the experiment has been a success. Railroads have reduced employment and increased labor productivity, rationalized capital, and lowered real rates while increasing rates of return and profitability MacDonald and Cavalluzzo, 1996, Wilson, 1994, Friedlaender et al., 1992, Winston et al., 1990 and Winston, 1993. Many economists correctly predicted that railroad deregulation would lower rates for many products. However, an exception to the general accuracy of these forecasts was with regard to bulk products (grain) where it was thought that shippers could expect higher rates (Levin, 1981). It was argued that railroad rates in the Great Plains would increase ex post regulation because of ineffective intermodal competition. However, in contrast to expectations, relatively large declines in rates occurred after deregulation. MacDonald (1989) offers, what is perhaps, the most comprehensive and definitive analysis. MacDonald uses 1981–1985 waybill data, in combination with selected control variables and regression methods to show that effective inter-rail competition was introduced into much of the Plains as a result of deregulation. Virtually all studies into the effect of deregulation on Great Plains grain rates analyzed a similar period and regardless of data or method generated findings that corroborate those of MacDonald Hauser, 1986, Sorenson, 1984 and Fuller et al., 1987. Previous studies into the effect of deregulation on Plains railroad grain rates focused on rate trends and competitive forces affecting rate levels. In contrast, this study examines the dynamic relationships among regional rail transportation rates that link seven central plain wheat production regions with export facilities on the Texas Gulf. The objective of this research is to determine whether export-wheat rates in Plains transportation markets are established independently, through interaction and/or dominated by several regional leaders. Further, because selected railroads have dominant market shares in most regions, the results are expected to offer a perspective on railroad company pricing. This study is of particular interest since the analyzed period (1988–1994) reflects important railroad consolidations and possible sophistication in price-setting that may not have been captured by previous studies that focused on the period immediately after deregulation. Analysis is carried out on public waybill data that identifies the origin of shipment by Business Economic Area (BEA). Seven BEA regions were found to virtually originate all wheat shipments to Texas Gulf ports; they included two regions that encompassed the western two-thirds of Kansas (northcentral and northwest (Salina, Kansas)), and southcentral and southwest Kansas (Wichita, Kansas)), a region located in northwest and central Oklahoma (Enid, Oklahoma), a region including the northeast quadrant of Colorado (Denver, Colorado), a region including the Texas (Amarillo, Texas) and Oklahoma panhandles and two regions centered about Kansas City and Dallas-Ft. Worth. Each of the Kansas regions and the Oklahoma region ship about 20% of Texas port receipts while the north Texas region (Dallas-Ft. Worth) contributes about 15%. Remaining economic regions shipped about equal portions (8%) to Texas ports. The regions centered about Kansas City and Dallas-Ft. Worth do not produce important quantities of export-destined wheat but, do include important secondary storage facilities that receive from the other five areas. During the study period, the Atchinson, Topeka and Santa Fe (ATSF); Union Pacific (UP); Burlington Northern (BN); Kansas City Southern (KCS) and the Southern Pacific (SP) railroads dominated in mainline, gathering system and in carriage of wheat to Texas ports. The UP system includes considerable mainline/gathering trackage in northcentral and northwest Kansas and Colorado as well as north/south trackage extending from northcentral Kansas (Salina) and Kansas City region to Texas ports (Fig. 1). The UP includes trackage in all study regions except the region comprising the Texas/Oklahoma panhandles. Based on waybill distance data and knowledge regarding location of major shipping sites, it was estimated that the UP transported about two-thirds of the export-destined wheat in northcentral and northwest Kansas and the Colorado region.