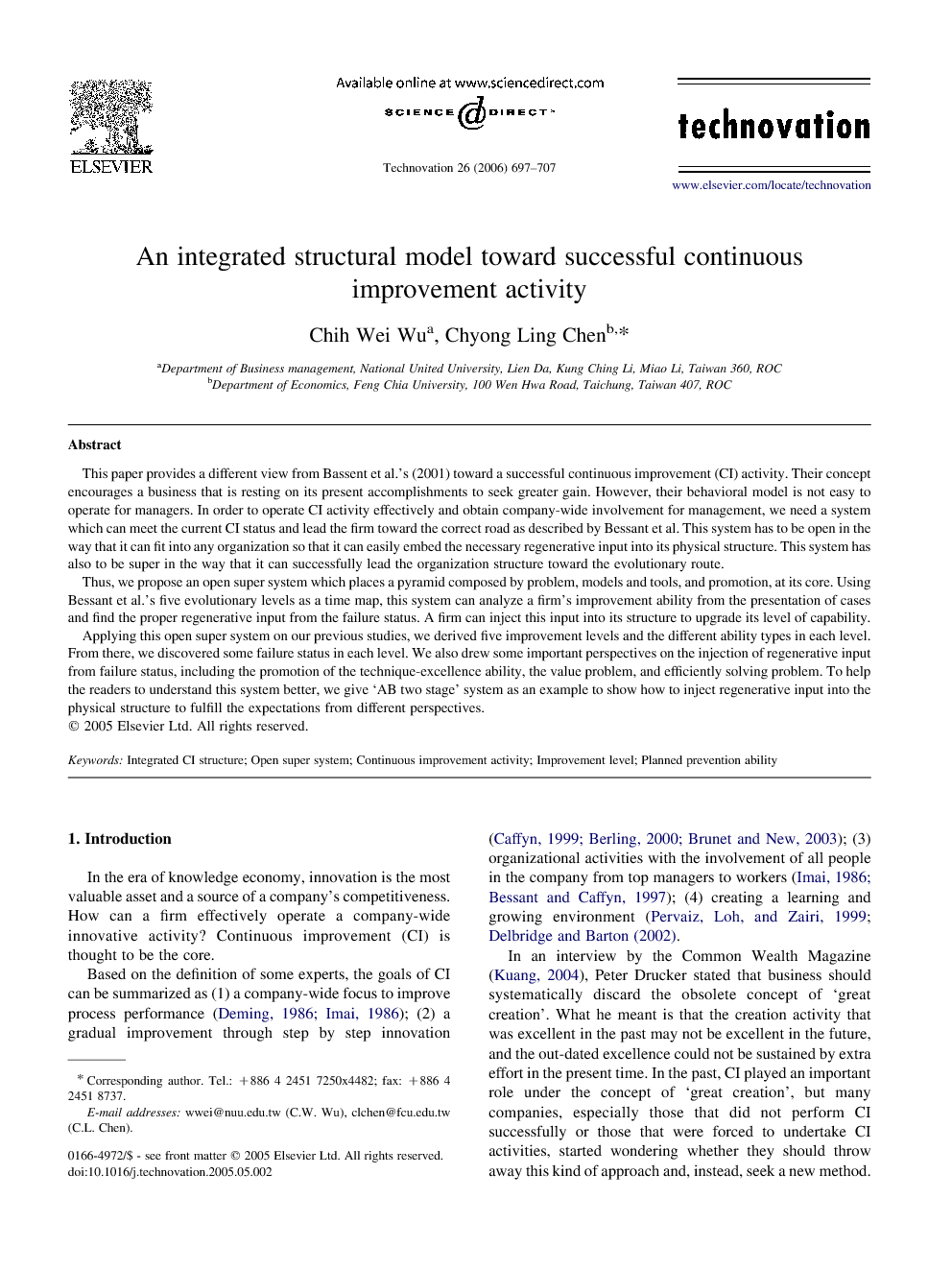 This paper provides a different view from Bassent et al.'s (2001) toward a successful continuous improvement (CI) activity. Their concept encourages a business that is resting on its present accomplishments to seek greater gain. However, their behavioral model is not easy to operate for managers. In order to operate CI activity effectively and obtain company-wide involvement for management, we need a system which can meet the current CI status and lead the firm toward the correct road as described by Bessant et al. This system has to be open in the way that it can fit into any organization so that it can easily embed the necessary regenerative input into its physical structure. This system has also to be super in the way that it can successfully lead the organization structure toward the evolutionary route. Thus, we propose an open super system which places a pyramid composed by problem, models and tools, and promotion, at its core. Using Bessant et al.'s five evolutionary levels as a time map, this system can analyze a firm's improvement ability from the presentation of cases and find the proper regenerative input from the failure status. A firm can inject this input into its structure to upgrade its level of capability. Applying this open super system on our previous studies, we derived five improvement levels and the different ability types in each level. From there, we discovered some failure status in each level. We also drew some important perspectives on the injection of regenerative input from failure status, including the promotion of the technique-excellence ability, the value problem, and efficiently solving problem. To help the readers to understand this system better, we give ‘AB two stage’ system as an example to show how to inject regenerative input into the physical structure to fulfill the expectations from different perspectives.

In the era of knowledge economy, innovation is the most valuable asset and a source of a company's competitiveness. How can a firm effectively operate a company-wide innovative activity? Continuous improvement (CI) is thought to be the core. Based on the definition of some experts, the goals of CI can be summarized as (1) a company-wide focus to improve process performance (Deming, 1986 and Imai, 1986); (2) a gradual improvement through step by step innovation (Caffyn, 1999, Berling, 2000 and Brunet and New, 2003); (3) organizational activities with the involvement of all people in the company from top managers to workers (Imai, 1986 and Bessant and Caffyn, 1997); (4) creating a learning and growing environment (Pervaiz, Loh, and Zairi, 1999; Delbridge and Barton (2002). In an interview by the Common Wealth Magazine (Kuang, 2004), Peter Drucker stated that business should systematically discard the obsolete concept of ‘great creation’. What he meant is that the creation activity that was excellent in the past may not be excellent in the future, and the out-dated excellence could not be sustained by extra effort in the present time. In the past, CI played an important role under the concept of ‘great creation’, but many companies, especially those that did not perform CI successfully or those that were forced to undertake CI activities, started wondering whether they should throw away this kind of approach and, instead, seek a new method. Yet, why was CI listed as one of the standards in ISO9000 and why does 6σ continuously develop new elements in the CI activities? Does the idea of working harder fall into Peter Drucker's curse? Those who do not understand the essence of CI may think that a good CI activity can be generated and sustained through the promotion of a good improvement model and top manager's support. It is not so easy in reality. The improvement case may fail without carefully examining the problem in the activity (Easton and Jarrell, 1998 and Wu and Chen, 2004). Sometimes the improvement program may look like it is successful, but it can not be sustained. Sometimes it may even worsen business performance creating an ‘improvement paradox’ (Sterman, Repenning, and Kofman, 1997). Bessant et al. (2001) emphasize the impossibility of one step leading to a successful CI activity. They, from the behavioral perspective, propose the five-level evolution, from trying out the idea, through structural and systematic CI, strategic CI, autonomous innovation, and finally to becoming a learning organization. The successful CI target can be achieved after the conclusion of these five levels. Bessant et al.'s concept of ‘levels of evolution’ may encourage a business that is resting on its present accomplishments, provoking it to seek greater gain. It also may help to remove Drucker's curse. However, Bessant et al.'s behavioral model may not meet business real needs, especially it is not easy to operate for management. We think the behavioral model can be enhanced by the following three aspects. (1) A sound structure is needed to sustain an activity. An activity involves the allocation of resources and human capital, as well as outcome. With a structure, we not only know how the components work, we also know how to add an input and what the expected output will be. In other words, a firm's problems can easily be explained and its future development can be predicted through this structure. (2) The developing process of an evolutional level cannot be realized from the behavioral model. Neither can the model provide a picture on how a firm moves from one level to another. Bessant et al. did not explain how the ability within each level was developed. We think the developing stages of a CI activity is necessary so that we can understand at what stage a firm currently stands and know if it can move to a higher stage with its existing structure. (3) Any activity has its life cycle: introduction, growth, maturity, and decline. Proper regenerative input needs to be injected before an activity declines, so that the firm's improvement level can be moved up to a higher level (Fig. 1). If the regenerative input is not accurate and timely, it may just prolong the activity instead of upgrading the firm's improvement level. The behavioral model cannot supply an approach on how to inject a regenerative input properly.In view of the above, in this paper, we propose a CI structural model, as well as its developing stages, to illustrate the evolutionary process. We discuss the failure status at each stage that does not move to higher ground during the developing process. The improvement levels that are derived from the stages and failure status also are presented. Finally, perspectives on the injection of regenerative inputs and an example on the application of this model are provided. Our goal is to provide a different view from Bessent et al.'s behavioral model toward a successful CI activity. This paper is organized as follows. In Section 2, we present an integrated CI structural model that places a pyramid structure at its core with its related input and output system. Developing stages of this pyramid structure are introduced in Section 3. In Section 4, we discuss the stage failure status and the improvement levels. Section 5 gives four important perspectives on the injection of regenerative inputs, which are derived from past accumulated experience and empirical studies. An example on the application of the integrated structural model is presented in Section 6. Our conclusions are set forth in Section 7.

In the past, most studies on CI activity focused on the problem, CI models, or the activity promotion. Each person thinks that his focus is the most critical point. In the reality, the situation is more complex. Deming expressed a new concept in his book ‘profound knowledge’: when we optimize our own department, we may be sub-optimizing the entire company (Latzko and Saunders, 1996). Focusing on one aspect was workable in the past because the business had not evolved to higher levels. Since CI is a company-wide activity, it cannot be sustained unless an integrated super system has been built and proper regenerative input is injected on a timely basis. Therefore, a business that enjoys the competitiveness from CI activity also should diagnose and analyze CI activity from time to time to understand its weaknesses and implement correction when necessary. This self-examination through the super system is the best way toward successful CI.