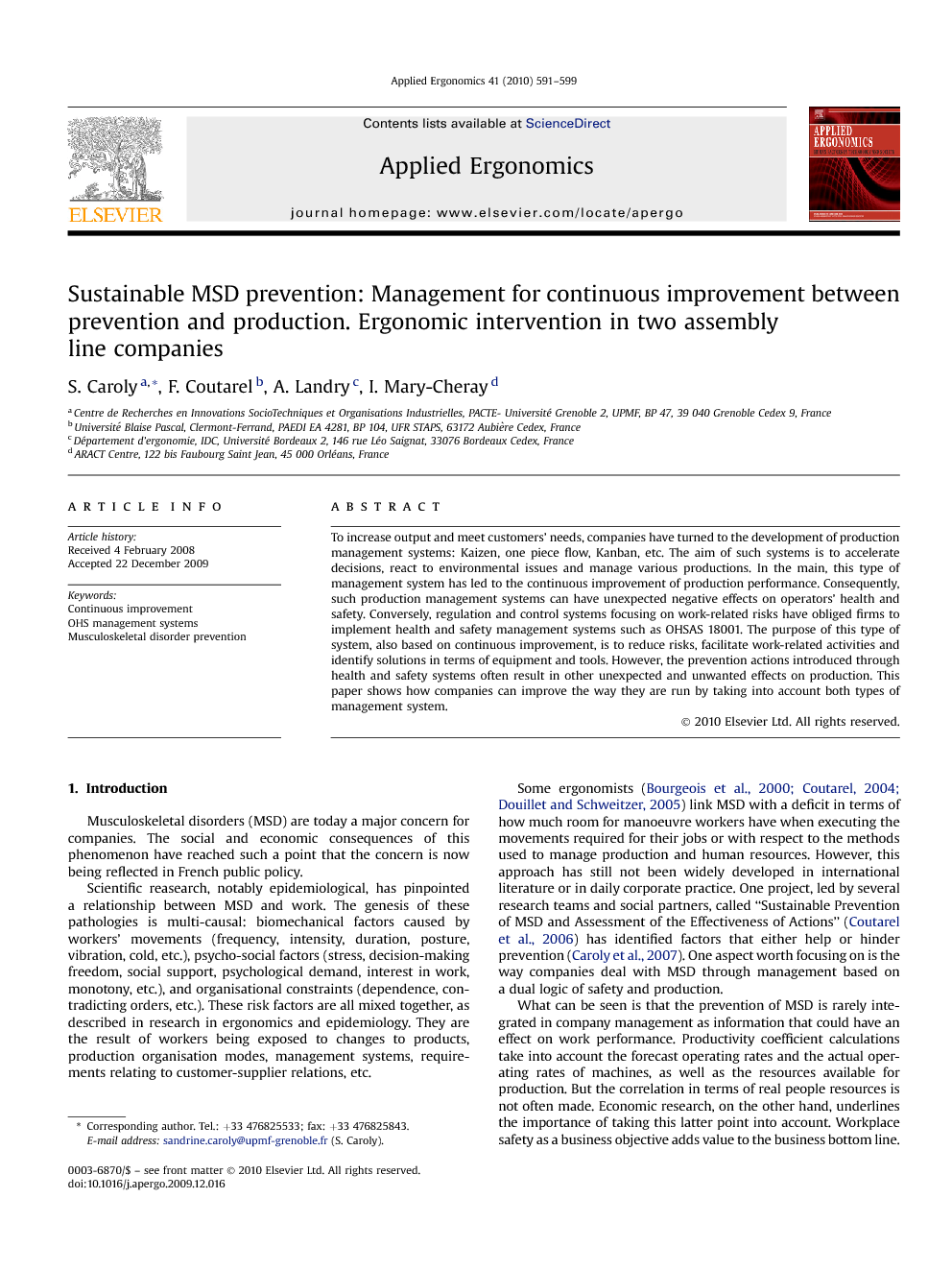 To increase output and meet customers' needs, companies have turned to the development of production management systems: Kaizen, one piece flow, Kanban, etc. The aim of such systems is to accelerate decisions, react to environmental issues and manage various productions. In the main, this type of management system has led to the continuous improvement of production performance. Consequently, such production management systems can have unexpected negative effects on operators' health and safety. Conversely, regulation and control systems focusing on work-related risks have obliged firms to implement health and safety management systems such as OHSAS 18001. The purpose of this type of system, also based on continuous improvement, is to reduce risks, facilitate work-related activities and identify solutions in terms of equipment and tools. However, the prevention actions introduced through health and safety systems often result in other unexpected and unwanted effects on production. This paper shows how companies can improve the way they are run by taking into account both types of management system.

Musculoskeletal disorders (MSD) are today a major concern for companies. The social and economic consequences of this phenomenon have reached such a point that the concern is now being reflected in French public policy. Scientific reasearch, notably epidemiological, has pinpointed a relationship between MSD and work. The genesis of these pathologies is multi-causal: biomechanical factors caused by workers' movements (frequency, intensity, duration, posture, vibration, cold, etc.), psycho-social factors (stress, decision-making freedom, social support, psychological demand, interest in work, monotony, etc.), and organisational constraints (dependence, contradicting orders, etc.). These risk factors are all mixed together, as described in research in ergonomics and epidemiology. They are the result of workers being exposed to changes to products, production organisation modes, management systems, requirements relating to customer-supplier relations, etc. Some ergonomists (Bourgeois et al., 2000, Coutarel, 2004 and Douillet and Schweitzer, 2005) link MSD with a deficit in terms of how much room for manoeuvre workers have when executing the movements required for their jobs or with respect to the methods used to manage production and human resources. However, this approach has still not been widely developed in international literature or in daily corporate practice. One project, led by several research teams and social partners, called “Sustainable Prevention of MSD and Assessment of the Effectiveness of Actions” (Coutarel et al., 2006) has identified factors that either help or hinder prevention (Caroly et al., 2007). One aspect worth focusing on is the way companies deal with MSD through management based on a dual logic of safety and production. What can be seen is that the prevention of MSD is rarely integrated in company management as information that could have an effect on work performance. Productivity coefficient calculations take into account the forecast operating rates and the actual operating rates of machines, as well as the resources available for production. But the correlation in terms of real people resources is not often made. Economic research, on the other hand, underlines the importance of taking this latter point into account. Workplace safety as a business objective adds value to the business bottom line. The link between Productivity–Quality–Costs–Safety appears like a sustained approach to competitive advantage. To get optimal benefit from implementing lean manufacturing techniques, companies must include a third variable in their lean manufacturing shibboleth—productivity, quality, and safety. (Maudgalya et al., 2008). The issue relating to the hidden costs of MSD for a company (Fauconnier and Pépin, 2004 and Geoffard, 2005) points to the difficulties involved in replacing staff, managing limited skills, absenteeism, workstation adaptation, etc. All of these factors have consequences: failure to reach productivity targets, drops in quality, time wasted recruiting temporary staff, training, etc. Overall production performance is therefore impacted by health and safety issues. Producing such data would therefore greatly contribute to decisions relating to change and to the coordination of improvement projects. Prevention would be more efficient if health were incorporated in the tools and indicators used to run companies. Ergonomics considerations should be an integral part of the planning procedure when establishing new production systems and work places (Weestgaard, 2000). Most stakeholders do not realise that there is a link between health and production. Strong management commitment is often a condition for this multiple-logic approach (health, production, maintenance, hygiene, quality, etc.). The need for flexible, rapid and evidence-based preventive approach is underlined to create the possibility of integrating positive, preventive elements into industrial practices (Kuorinka, 1998). The aim of this research paper is to analyse the conditions required for this safety/production logic approach to be integrated in the “continuous improvement” systems of French industry. Incorporating organisational level into occupational health research is an international question which could help industries to improve production/safety and preserve worker health (MacDonald et al., 2008).

In both companies, it can first of all be seen that the continuous improvement programme, implemented before the intervention work, focused on the production system or the safety management system. Any sort of compromise between performance-based logic and health-based logic was absent. There were obviously problems, and the diagnosis had led to solutions being sought, but according to a single logic, i.e. the one identified at the beginning. The assessment of improvement actions was not very well carried out, not very participative and did not lead to the building of indicators to facilitate the way different forms of logic were managed in the company. The appearance of MSD differed according to the company. In terms of health indicators, there were two opposing trends: in one company there was low absenteeism but a high level of occupational illnesses, while in the other company it was the other way round. These health indicators could be used to mobilise managers around a prevention policy for company A. The building of a consistent management approach is nevertheless hindered by the daily problems involved in carrying out the actual work: - when they start their shift, the team leaders manage absenteeism as best they can, - production is slowed down by machine breakdowns and other unexpected problems, - in spite of the accident analysis, there are still many situations involving risks, - quality goes by the wayside when decisions are taken upstream before any understanding of the reality downstream is sought, - there is an increasing gap between work organisation flexibility (in order to meet customer requirements) and the rigid production methods (dependence between colleagues). This divide between different forms of logic prevents the company from analysing operational problems and using effective actions in project management. Does the production system give operators any room for manoeuvre so as to foster a compromise between health and performance? Is there a system for coordinating a production-based approach and an approach focusing on health? Who are the stakeholders involved in production organisation and those involved in risk prevention? What kind of social dialogue does the company have?