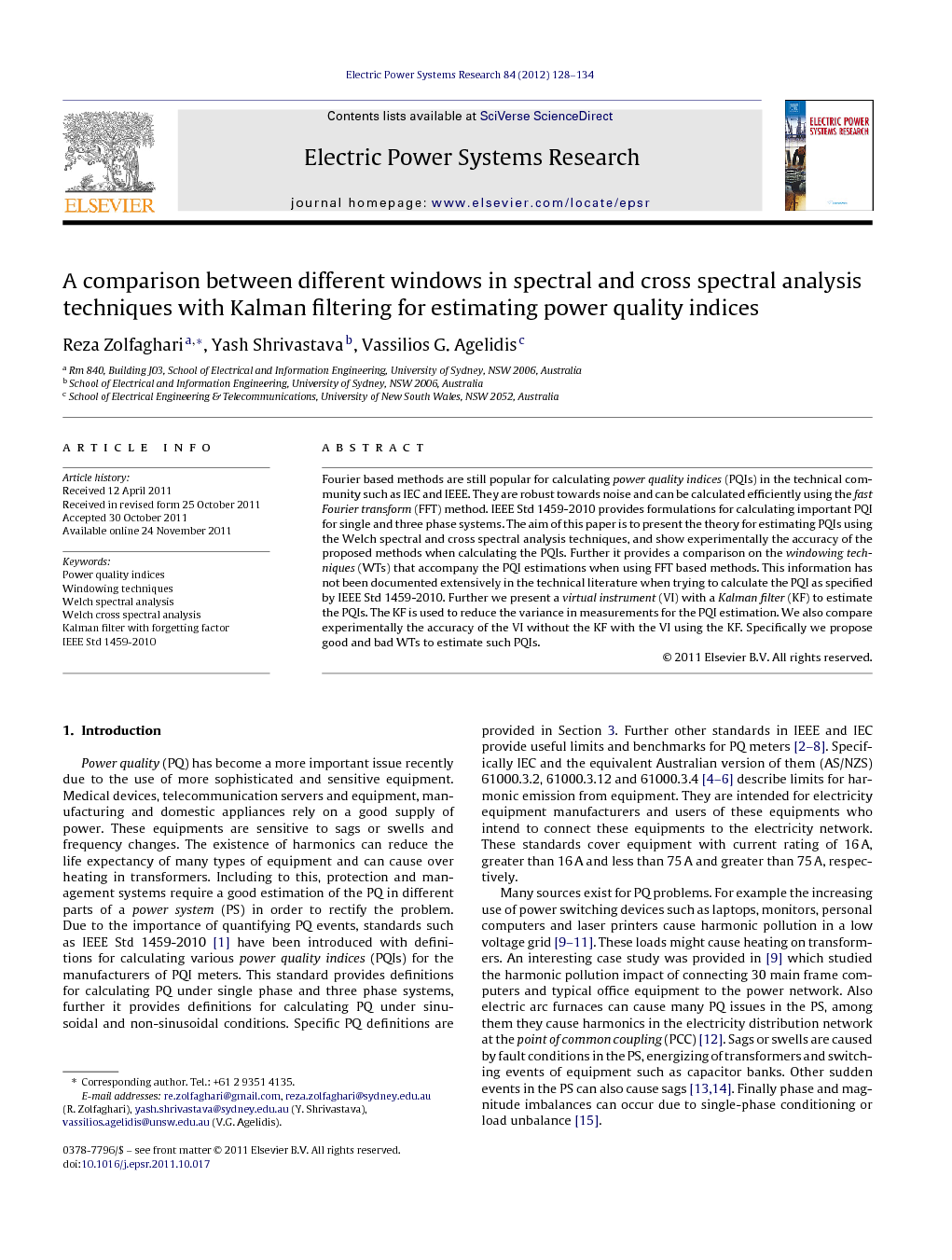 Fourier based methods are still popular for calculating power quality indices (PQIs) in the technical community such as IEC and IEEE. They are robust towards noise and can be calculated efficiently using the fast Fourier transform (FFT) method. IEEE Std 1459-2010 provides formulations for calculating important PQI for single and three phase systems. The aim of this paper is to present the theory for estimating PQIs using the Welch spectral and cross spectral analysis techniques, and show experimentally the accuracy of the proposed methods when calculating the PQIs. Further it provides a comparison on the windowing techniques (WTs) that accompany the PQI estimations when using FFT based methods. This information has not been documented extensively in the technical literature when trying to calculate the PQI as specified by IEEE Std 1459-2010. Further we present a virtual instrument (VI) with a Kalman filter (KF) to estimate the PQIs. The KF is used to reduce the variance in measurements for the PQI estimation. We also compare experimentally the accuracy of the VI without the KF with the VI using the KF. Specifically we propose good and bad WTs to estimate such PQIs.

Power quality (PQ) has become a more important issue recently due to the use of more sophisticated and sensitive equipment. Medical devices, telecommunication servers and equipment, manufacturing and domestic appliances rely on a good supply of power. These equipments are sensitive to sags or swells and frequency changes. The existence of harmonics can reduce the life expectancy of many types of equipment and can cause over heating in transformers. Including to this, protection and management systems require a good estimation of the PQ in different parts of a power system (PS) in order to rectify the problem. Due to the importance of quantifying PQ events, standards such as IEEE Std 1459-2010 [1] have been introduced with definitions for calculating various power quality indices (PQIs) for the manufacturers of PQI meters. This standard provides definitions for calculating PQ under single phase and three phase systems, further it provides definitions for calculating PQ under sinusoidal and non-sinusoidal conditions. Specific PQ definitions are provided in Section 3. Further other standards in IEEE and IEC provide useful limits and benchmarks for PQ meters [2], [3], [4], [5], [6], [7] and [8]. Specifically IEC and the equivalent Australian version of them (AS/NZS) 61000.3.2, 61000.3.12 and 61000.3.4 [4], [5] and [6] describe limits for harmonic emission from equipment. They are intended for electricity equipment manufacturers and users of these equipments who intend to connect these equipments to the electricity network. These standards cover equipment with current rating of 16 A, greater than 16 A and less than 75 A and greater than 75 A, respectively. Many sources exist for PQ problems. For example the increasing use of power switching devices such as laptops, monitors, personal computers and laser printers cause harmonic pollution in a low voltage grid [9], [10] and [11]. These loads might cause heating on transformers. An interesting case study was provided in [9] which studied the harmonic pollution impact of connecting 30 main frame computers and typical office equipment to the power network. Also electric arc furnaces can cause many PQ issues in the PS, among them they cause harmonics in the electricity distribution network at the point of common coupling (PCC) [12]. Sags or swells are caused by fault conditions in the PS, energizing of transformers and switching events of equipment such as capacitor banks. Other sudden events in the PS can also cause sags [13] and [14]. Finally phase and magnitude imbalances can occur due to single-phase conditioning or load unbalance [15]. The Fourier based technique, discrete Fourier transform (DFT) and its accompanying fast Fourier transform (FFT) method are still very popular in the PS technical literature [16] and [17] and standards [2]. Further harmonic analysis is central to PQ estimations discussed in this paper. In [18] (Section 4.6), FFT based methods have been found to be more suitable than other methods such as the discrete wavelet transform for harmonic analysis. Including to the above their popularity is also due to their efficient computation and further robustness towards noise. For example [19] studies detection of transients in the PS using FFT, while [17], [20] and [21] focus on detecting inter-harmonics and [17], [22] and [23] use FFT based methods to calculate the harmonics present in a PS. Windowing techniques (WTs) have accompanied the FFT technique since its inception. Many kinds of WTs have been proposed in the technical literature [16], [24], [25] and [26], but not all are suitable for the purpose of calculating the PQIs. Many windows suffer from a wide main lobe [16] and [24] and others have problems with peak side lobe levels such as the rectangular window (RW). Good windows for PQI estimation require further investigation. It is understood that a drawback to the FFT based methods is that they suffer from leakage and picket fencing problems [27]. However, methods have been proposed in the technical literature to improve this problem [20], [21], [28], [29] and [30]. Further it is well known that the main source of pollution in a PS are harmonics, and with the window length suggested in the IEC standard [2] the use of FFT methods once again becomes promising and further feasible for PQI analysis. This said the use of the Welch method of spectral analysis and cross spectral analysis (WSA–WCSA) which uses the FFT method in its calculations applied to estimating the PQIs defined in the IEEE Std 1459-2010 is relatively new [29] and [30]. Further the technical literature available on WTs used in WSA–WCSA and applied to estimating the PQIs in general and specifically the PQIs in IEEE Std 1459-2010 also requires more investigation. The authors of this document presented two VIs in [29] and [30] based on WSA–WCSA methods for calculating some PQI in IEEE Std 1459-2010. This paper enhances the work given in [29] and [30] by comparing a larger number of windows both classical, such as Bartlett and Hamming compared to [29] and [30] and also it includes more recent windows used in [25] and referred in [16]. Further a new VI is proposed compared to the VI in [30]. The new VI contains a new module with a tunable Kalman filter (KF) and a forgetting factor (FF) to smooth the PQI instead of the harmonic and phase angle components as it was presented in [30], [31] and [32]. To summarize the aim of this paper is to show the accuracy of the WSA–WCSA method in practice for calculating the PQIs defined by IEEE Std 1459-2010. Also it introduces and shows the effectiveness of the KF with the FF in smoothing the estimated PQIs. Finally it tries to distinguish suitable and unsuitable WTs for the purpose of PQI estimation. The organization of this paper would be as follows: in Section 2 we present the signal processing techniques required for estimating the PQIs like WSA–WCSA, WT and Kalman filtering with a FF. Section 3 provides some explanation on the most important PQIs in IEEE Std 1459-2010 which is also used in the experiments. Section 4 explains how our VIs are designed and operate. Section 5 details the experiment setup and Section 6 provides key points understood from the experiment. Finally a conclusion is given in Section 7.

Two VIs to compute PQI based on WSA–WCSA with or without a KF were presented and compared. Many WTs were examined for their suitability for this task. The RW produced the poorest results experimentally and was not found to be suitable for the task of PQI estimation. All other windows performed well and had similar results under the experiment designed. That said, there can be further experiments conducted among the good windows to find the most suitable window for PQI estimation. The use of a KF with a FF made the design more robust in the presence of noise as it reduced the variance in our measurements by many orders. The accuracy of the KF instrument was very close to the instrument with NKF for all PQIs given the limited convergence time allowed. Overall the WSA–WCSA method was shown to be accurate and suitable for estimating PQIs as given by the IEEE standard. Further research and work can be conducted to add extra functionality to the above VIs by detecting/estimating inter-harmonics and or transients.