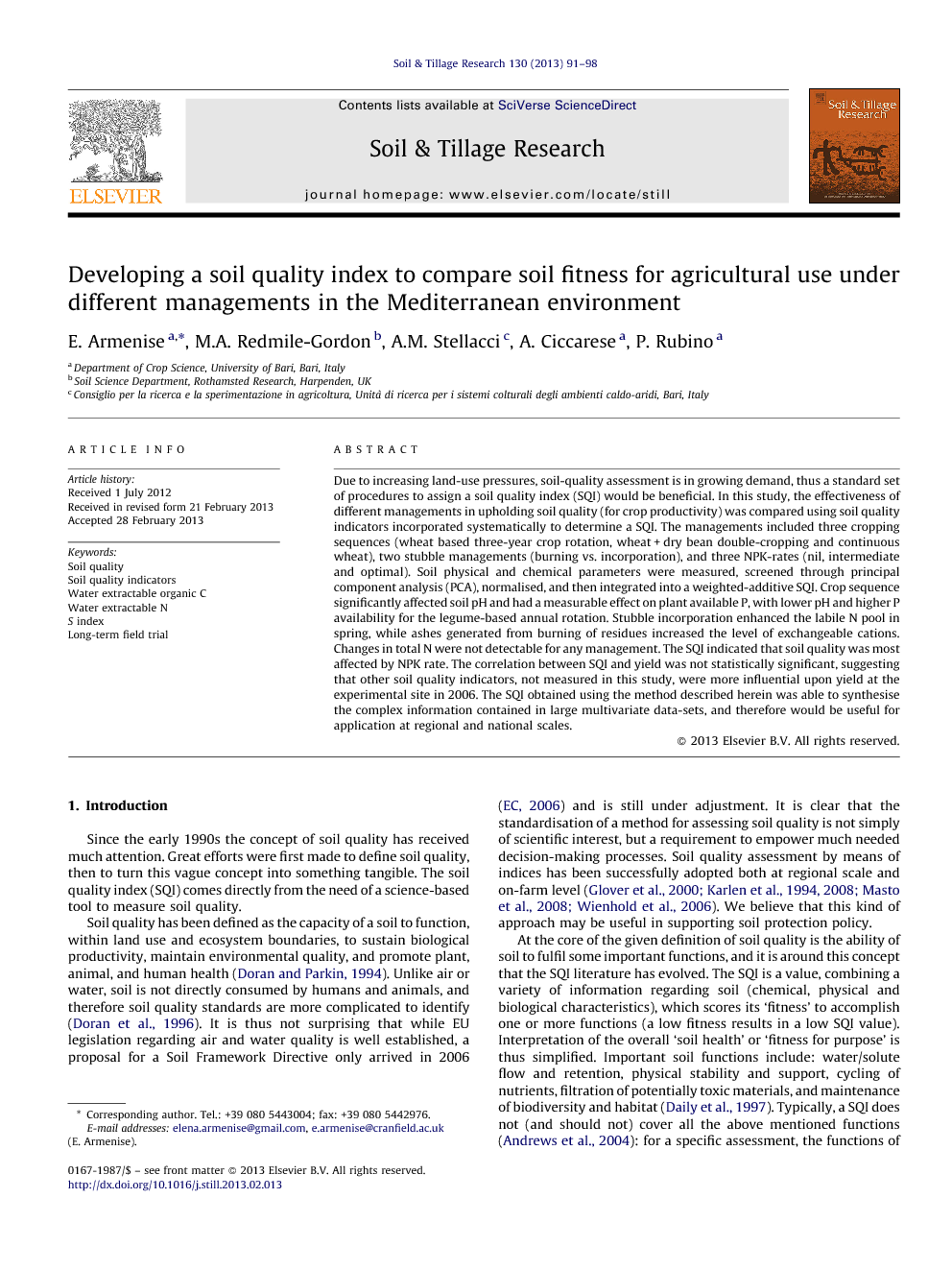 Due to increasing land-use pressures, soil-quality assessment is in growing demand, thus a standard set of procedures to assign a soil quality index (SQI) would be beneficial. In this study, the effectiveness of different managements in upholding soil quality (for crop productivity) was compared using soil quality indicators incorporated systematically to determine a SQI. The managements included three cropping sequences (wheat based three-year crop rotation, wheat + dry bean double-cropping and continuous wheat), two stubble managements (burning vs. incorporation), and three NPK-rates (nil, intermediate and optimal). Soil physical and chemical parameters were measured, screened through principal component analysis (PCA), normalised, and then integrated into a weighted-additive SQI. Crop sequence significantly affected soil pH and had a measurable effect on plant available P, with lower pH and higher P availability for the legume-based annual rotation. Stubble incorporation enhanced the labile N pool in spring, while ashes generated from burning of residues increased the level of exchangeable cations. Changes in total N were not detectable for any management. The SQI indicated that soil quality was most affected by NPK rate. The correlation between SQI and yield was not statistically significant, suggesting that other soil quality indicators, not measured in this study, were more influential upon yield at the experimental site in 2006. The SQI obtained using the method described herein was able to synthesise the complex information contained in large multivariate data-sets, and therefore would be useful for application at regional and national scales.

Since the early 1990s the concept of soil quality has received much attention. Great efforts were first made to define soil quality, then to turn this vague concept into something tangible. The soil quality index (SQI) comes directly from the need of a science-based tool to measure soil quality. Soil quality has been defined as the capacity of a soil to function, within land use and ecosystem boundaries, to sustain biological productivity, maintain environmental quality, and promote plant, animal, and human health (Doran and Parkin, 1994). Unlike air or water, soil is not directly consumed by humans and animals, and therefore soil quality standards are more complicated to identify (Doran et al., 1996). It is thus not surprising that while EU legislation regarding air and water quality is well established, a proposal for a Soil Framework Directive only arrived in 2006 (EC, 2006) and is still under adjustment. It is clear that the standardisation of a method for assessing soil quality is not simply of scientific interest, but a requirement to empower much needed decision-making processes. Soil quality assessment by means of indices has been successfully adopted both at regional scale and on-farm level (Glover et al., 2000, Karlen et al., 1994, Karlen et al., 2008, Masto et al., 2008 and Wienhold et al., 2006). We believe that this kind of approach may be useful in supporting soil protection policy. At the core of the given definition of soil quality is the ability of soil to fulfil some important functions, and it is around this concept that the SQI literature has evolved. The SQI is a value, combining a variety of information regarding soil (chemical, physical and biological characteristics), which scores its ‘fitness’ to accomplish one or more functions (a low fitness results in a low SQI value). Interpretation of the overall ‘soil health’ or ‘fitness for purpose’ is thus simplified. Important soil functions include: water/solute flow and retention, physical stability and support, cycling of nutrients, filtration of potentially toxic materials, and maintenance of biodiversity and habitat (Daily et al., 1997). Typically, a SQI does not (and should not) cover all the above mentioned functions (Andrews et al., 2004): for a specific assessment, the functions of greatest relevance are selected according to the management goal for which the assessment is to be made. Consequently, SQI assessment begins by defining the management goal(s) (e.g. crop productivity, waste recycling and environmental protection), followed by associating the critical soil functions. Since the functions are not directly measurable, appropriate physical, chemical and biological parameters, named soil quality indicators, are selected to indirectly measure how well each function is being performed (Karlen et al., 2004). The main requirement for a soil property to be selected as a soil quality indicator is that it shows sensitivity to changes occurring within the soil function in question. Other favourable features include: a positive correlation with ecosystem services, being easily measurable, sensitive to management, and whenever possible, to be a component of a pre-existing database (Andrews et al., 2004). Various indexing techniques have been established so far (Andrews et al., 2002, Harris et al., 1996, Karlen and Stott, 1994 and Wander and Bollero, 1999). The approach followed by Andrews et al. (2002), as based on statistical and mathematical tools, provides outcomes which are comparable across different soil types, regions and management systems. It was also the core upon which the Soil Management Assessment Framework (SMAF) was developed. SMAF is an additive, non-linear indexing tool, freely available for any user who desires to interpret soil quality indicators and integrate available information into an overall SQI (http://soilquality.org/tools/smaf_intro.html). Soil management in an agricultural system can play a major role in soil protection. The success of any management in maintaining soil quality depends on how soil responds over time (Gregorich et al., 1994) and thus long-term field experiments provide an ideal platform for critical appraisal of these managements. Long-term experiments often produce huge data-sets, and handling such an amount of information can lead to confusion, and, in the worst instance, misinterpretation. SQIs can be used effectively for interpreting the multivariate data-set typical of long-term field trials (Hussain et al., 1999, Karlen et al., 1994, Karlen et al., 2006, Masto et al., 2008 and Sharma et al., 2008), with a single score being able to identify an overall trend among several, potentially conflicting indicators (Andrews et al., 2003). In the present work, using data from an existing long-term field experiment comparing contrasting soil managements (cropping sequence, stubble management and NPK level), SQIs were calculated with the aim of quantifying the potential of the managements in upholding soil quality for agricultural purpose in the Mediterranean environment. The indexing technique assessed here follows that proposed by Andrews et al. (2002).

Physical indicators were less responsive to the management practices in comparison to the chemical parameters. Of the latter group, the WEN fraction was the most sensitive to soil management. The fertiliser level appeared to drive SQI results, with the higher NPK-rates significantly increasing SQI values. No effects on the overall soil health status, embodied by the SQI, were ascribed to either cropping sequence or stubble management. SQI was not significantly correlated with grain yield, suggesting that other soil quality indicators, not measured in this study, were more influential upon yield at the experimental site in 2006. Nonetheless, a well-developed SQI, based on statistical techniques, provided valuable support for evaluating the interactions between soil quality indicators of different long-term soil managements. Though descriptive statistics from univariate ANOVA may provide sensible information about the most influential parameters on soil quality at farm scale, the potential of the SQI, with specific regard to its ability of simplifying complex data-sets, would be better expressed when applied at regional and national scales.